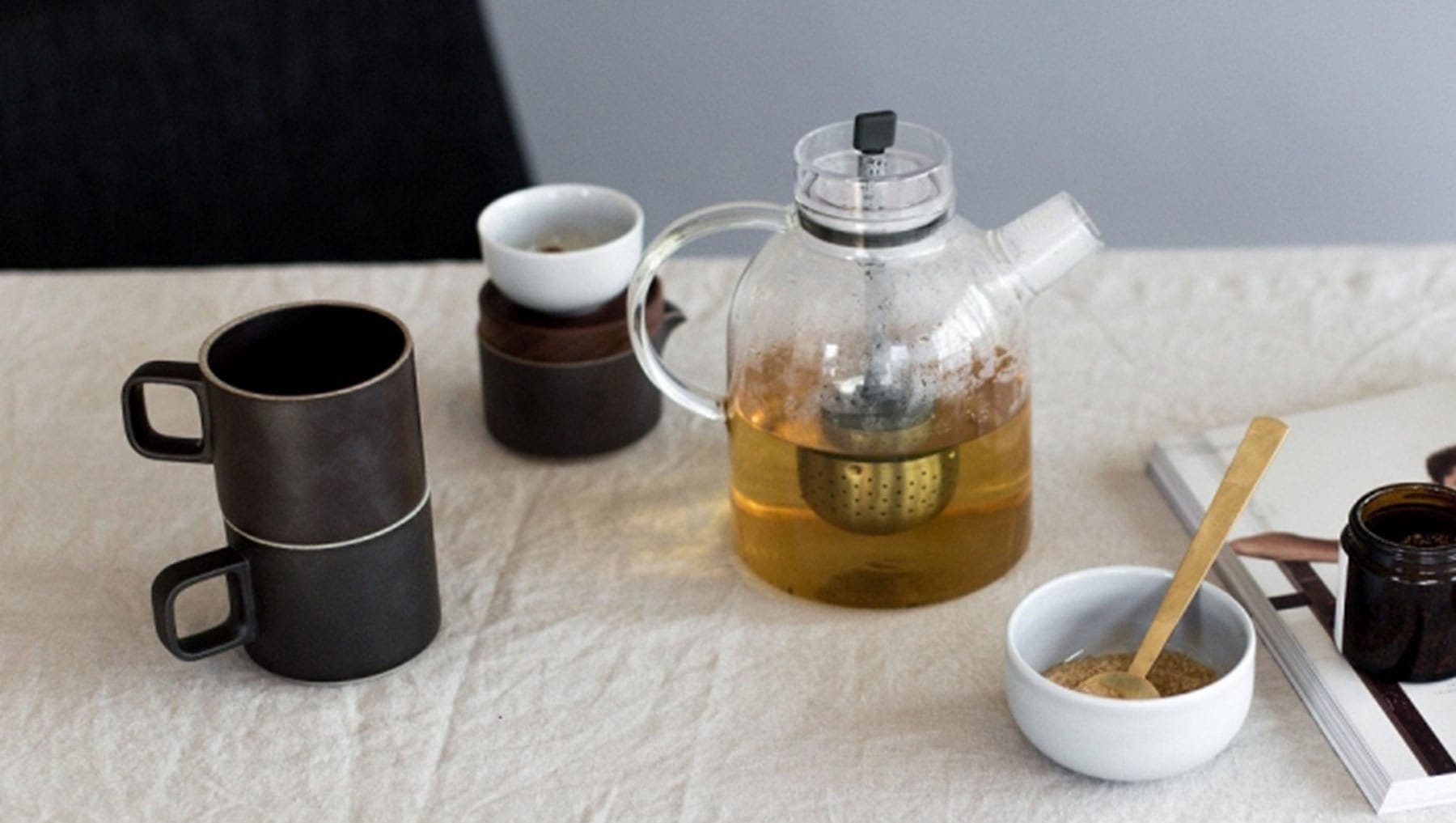 The story of our favorite beverage is very old, historians believe that as a drink – tea originated in China where it was first used as a medicine. Today, tea is still used for when we have a cold to help us get better, and we usually drink it on cold days as a hot beverage. But how did we discover tea? What about the art of making tea? Every tea enthusiast can tell you that it’s not just pouring hot water over herbs. Read all about it on our blog!

In the old world, it was believed that certain herbs have health benefits. According to a Chinese legend, the emperor Shennong – who is regarded as the father of Chinese medicine and agriculture, had tasted hundreds of wild herbs (among them tea leaves) in order to ascertain their medicinal value. If we were to follow this narrative, the discovery of tea dates back to around 2700 BC, which is pretty impressive if you think of it!

Tea was popularized as a recreational drink during the Chinese Tang dynasty and from there it spread to other East Asian countries. With trading, Portuguese merchants and priests introduced tea as a beverage to Europe in the 16th. century. The British embraced the culture of drinking tea, and it became extremely popular during the 17th. century. With such high demands, came the large-scale production and commercialization of the plant Camellia sinensis in India. When we think of  “Tea time” we usually refer to the UK and culture of drinking tea that became a symbol and some sort of cultural appropriation. The history of tea dates back almost 5,000 years ago and tea itself now has more than 3,000 different variations. This is the most widely consumed beverage in the world, and has both a historical and cultural importance that cannot be rivaled.

What about the tea as we know it today, packed in small bags, and mass produced? Tea bags were invented in America in the early twentieth century, but became popular in the 70s in Britain. Nowadays, it would be hard for many tea-drinkers to imagine life without them.

But how exactly do you engage in the art of making tea? First of all is quality! Bad-quality tea will always be bad-quality tea no matter how hard you try. When picking out the right tea you should estimate tea’s quality – look for a satisfying aroma, leaves that are not-too-crunchy and have good color. We recommend you to check out Normann Copenhagen selection of Teas contained in colorful and reusable tins (Chai, Rooibos, Green Tea, Mint Caramel, Lemon Meringue and many more) – the set comes with a reusable tea strainer designed to give you just the perfect aroma. 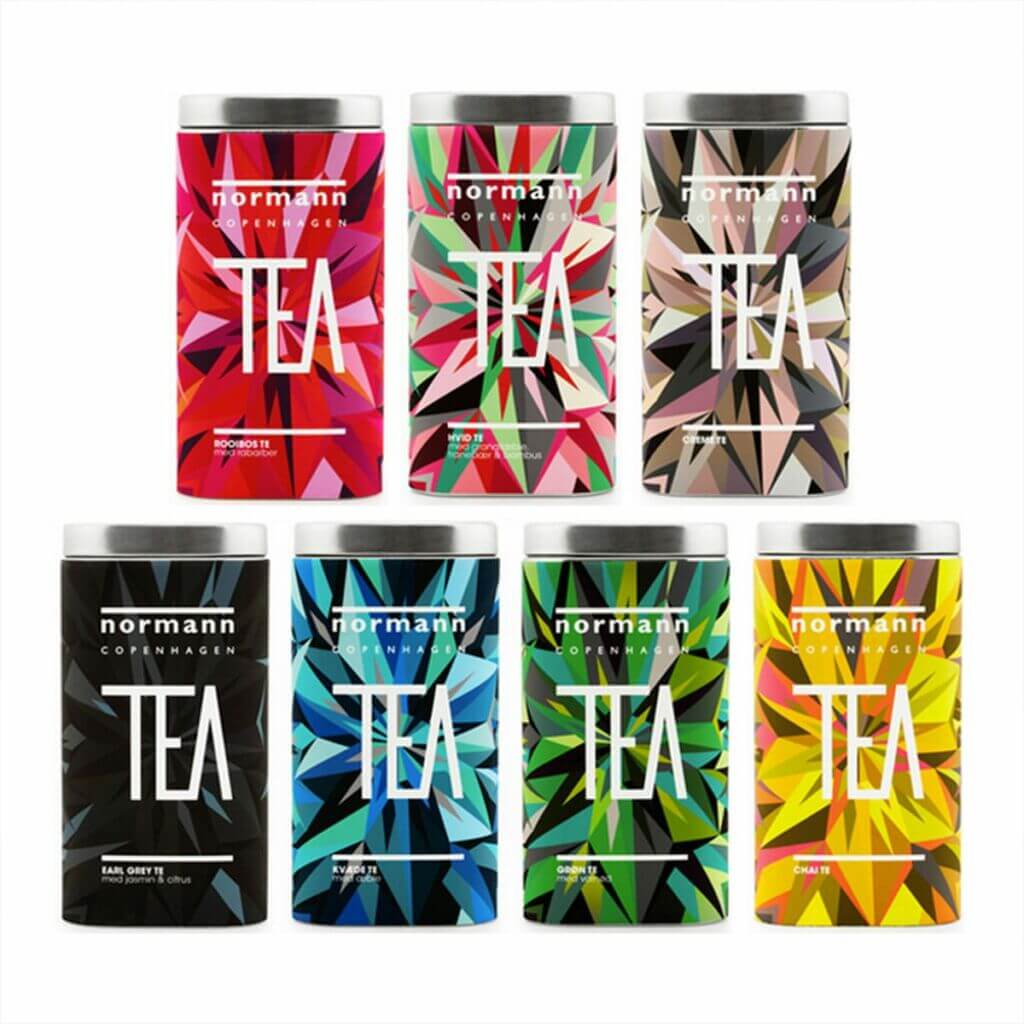 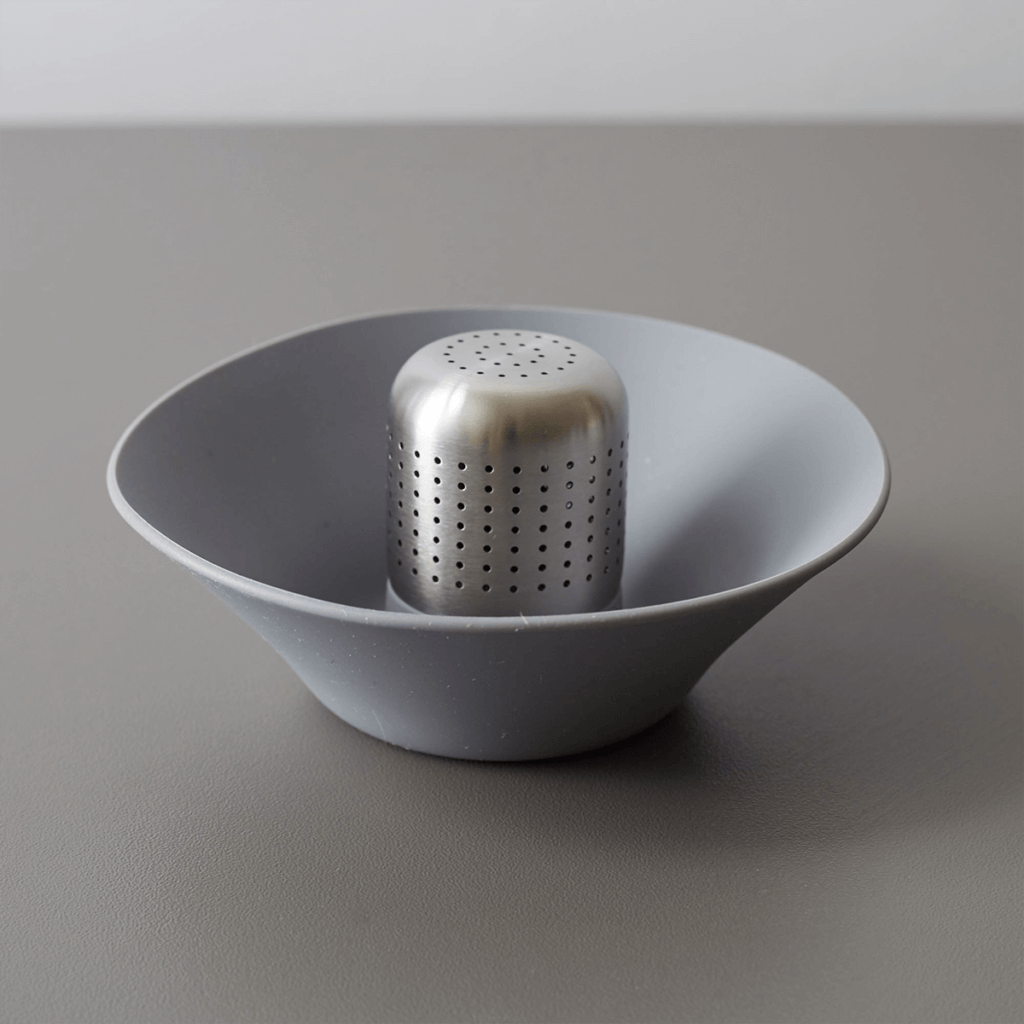 In the battle of bag vs. leaf many tea experts agree that it’s ok to favorite one method, but as long as the tea is fresh, preparing it from a bag is totally fine. Our nanna was right when she told us to pre-warm the pot/or cup before popping the infuser in, because a cold cup/pot can drop the temperature of your water, another very important element.  When looking to buy an infuser, a roomy one is a must if you like full-leaf teas (the leaves need to unfurl in order to properly infuse). If you prefer finely cut teas like Indian or Sri Lankan black teas a smaller infuser is the perfect choice for you. 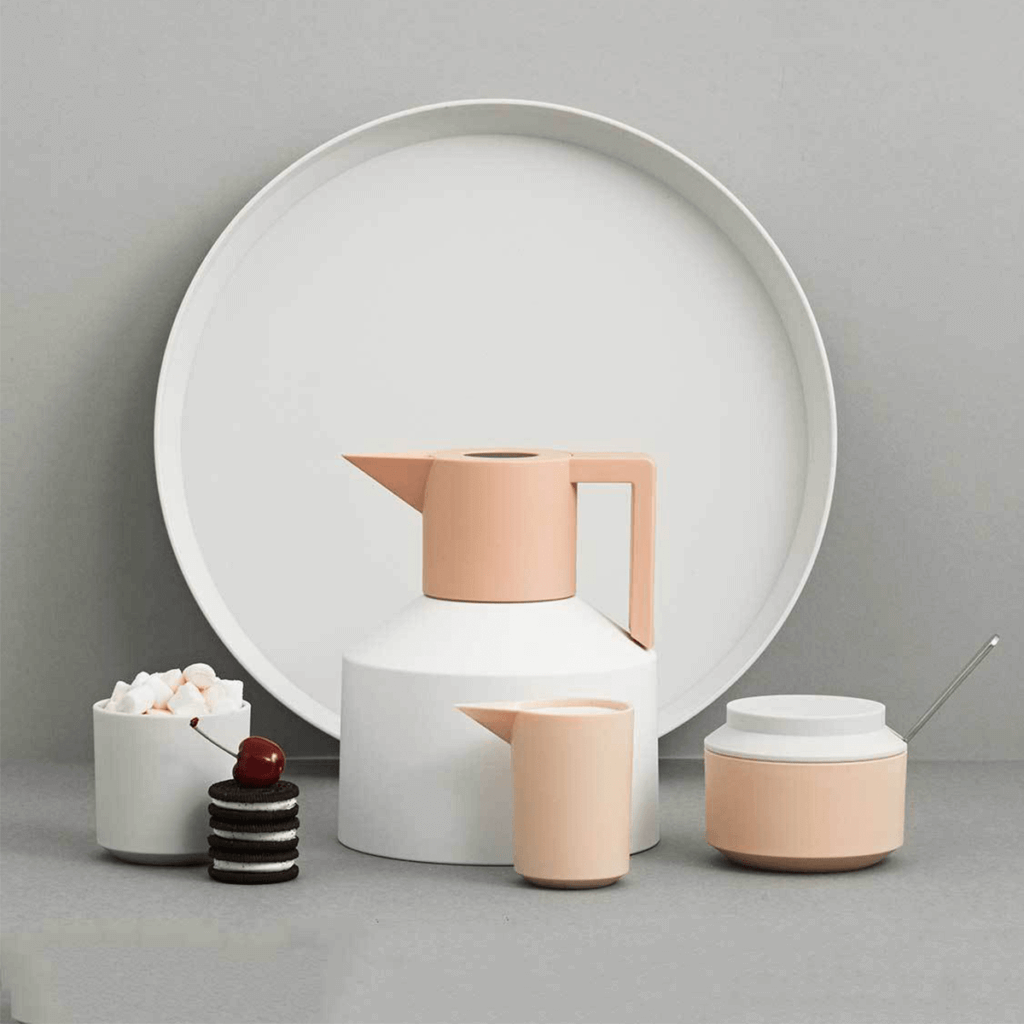 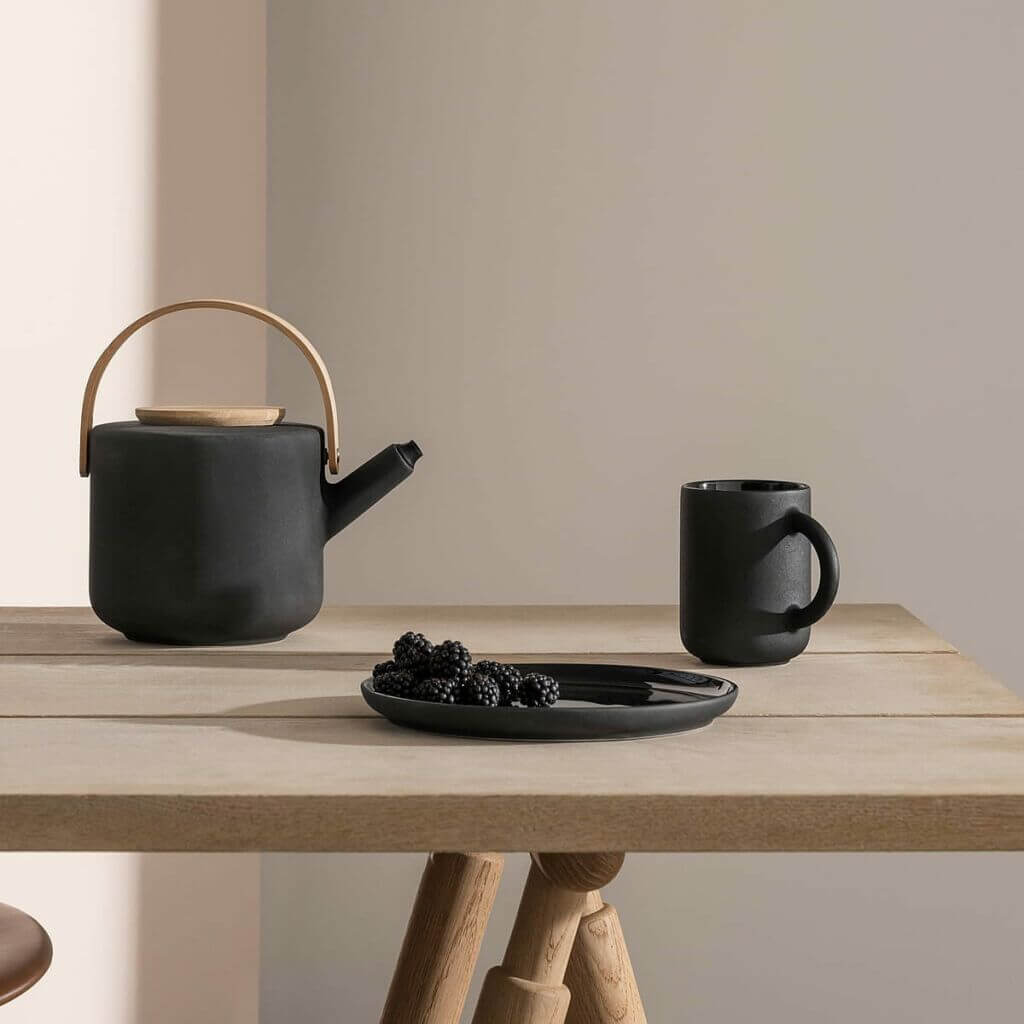 Tea experts advise to use jugs, jug-softeners and filters for your water, because filtering will reduce chlorine, which masks the tea’s flavor. Our recommendation for all tea lovers is Geo Vacuum Jug  by Normann Copenhagen that combines minimalistic design with sharp edges, fused with lively color combinations. It sure looks beautiful on the outside, but on the inside, this beautiful flask is also a thermos. It can hold up to one liter and it comes in different colors.   If you are looking for a more classic feel, we advise you to try Stelton Theo Teapot with the lid and the handle from bamboo – a reference to Asian tea culture. You can match it with the whole Theo collection.

Just like when brewing coffee, in the art of making tea ratio is everything. Two grams of tea per 150ml of water is a rule of thumb for almost any tea, just be careful because some teas like green or white tea are lighter than others. 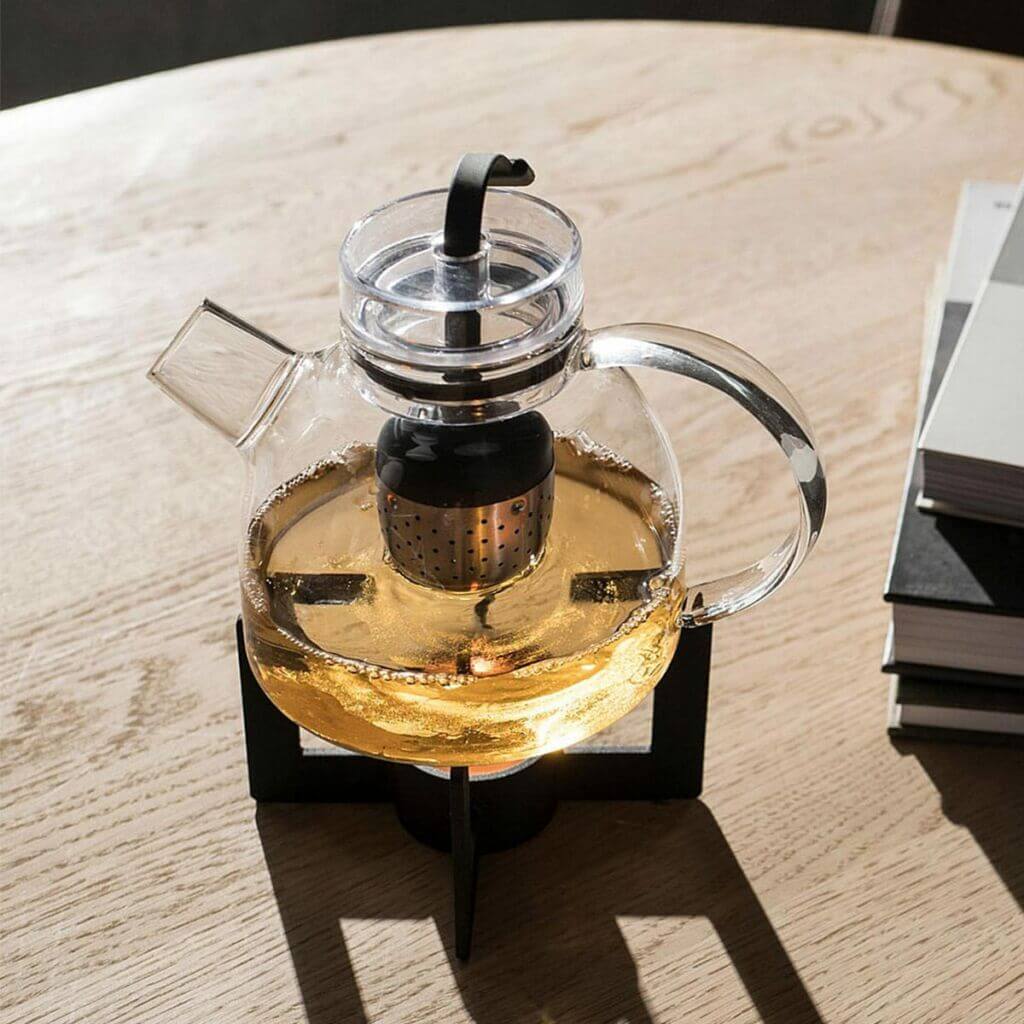 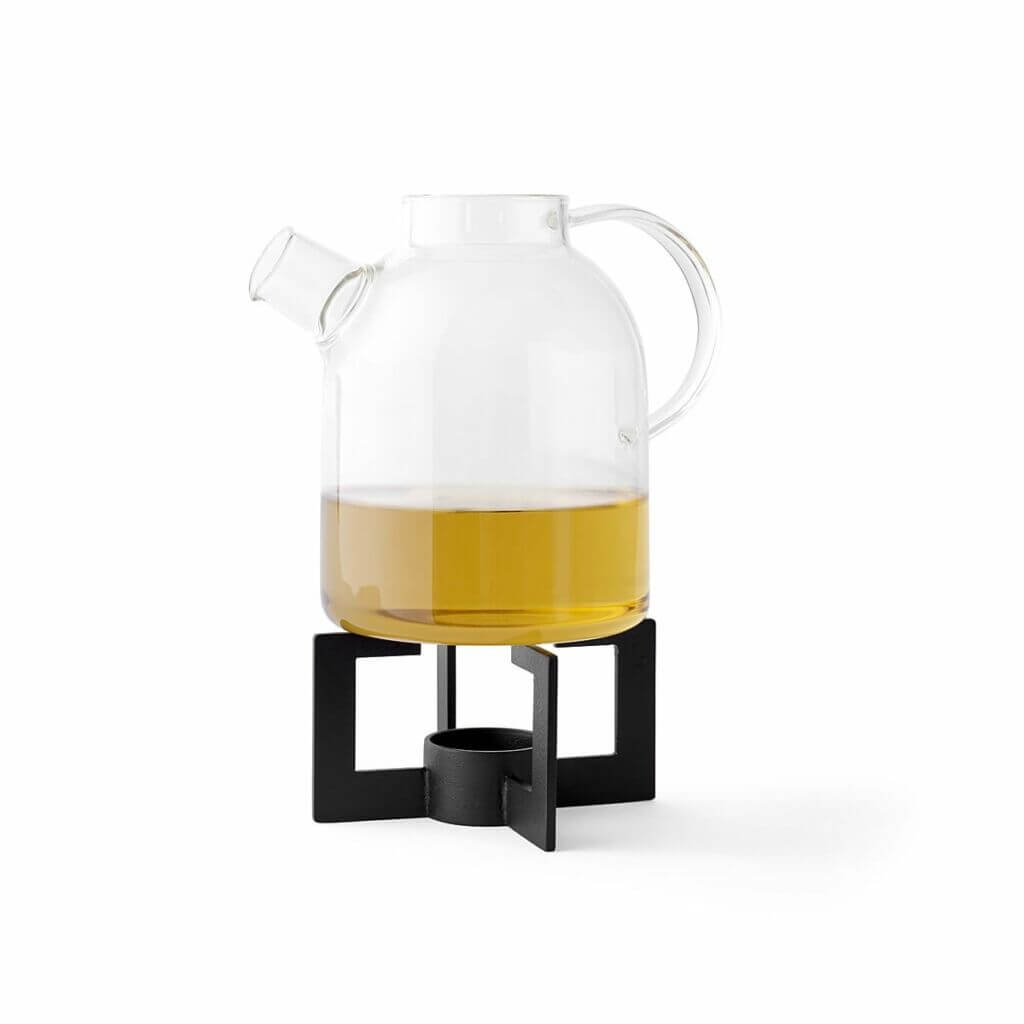 When it comes to temperature, dark teas, like black teas and oolong, work best in water around 100 degrees. White and yellow tea works best around 70 – 80°C because you can feel the freshness and sweetness of the leaves. Green tea works best with 60°C. When brewing the optimal time is three to five minutes (but it also depends on the personal taste). We recommend you to try out Cast Tea Heater by Menu that takes inspiration from the old iron elements on traditional stoves. Encouraged by a simpler way of living, this Tea heater uses fire to brew, re-contextualizing the traditional tea-making process with fuss-free heating method. 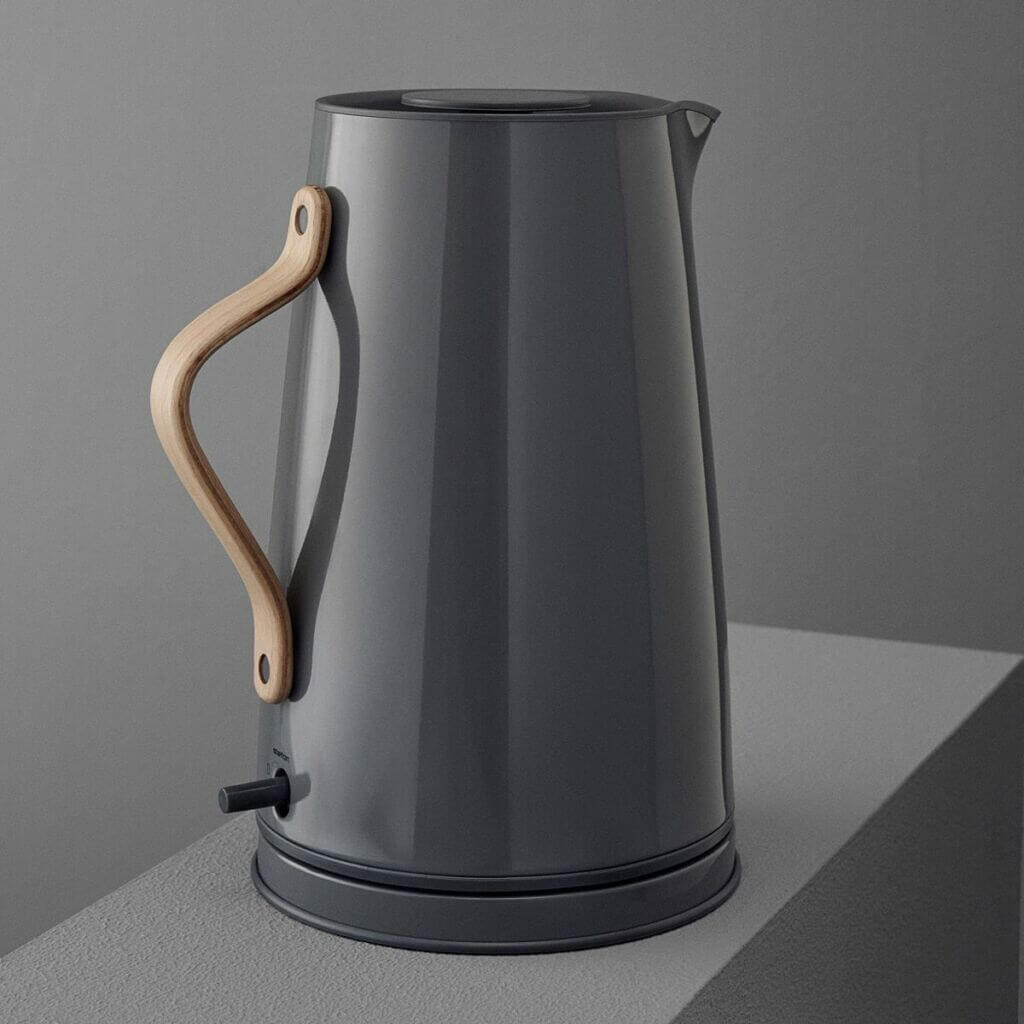 If you are a fan of a more modern feeling, we recommend a Stelton classic – Emma electric kettle, inspired by the golden age of Danish design. What’s more, the kettle has a removable limescale filter and a dry boil safety switch. The cordless kettle made of stainless steel is equipped with an automatic switch off for when the water has boiled and features a 360° swivel base. It has a capacity of 1.2 liters. 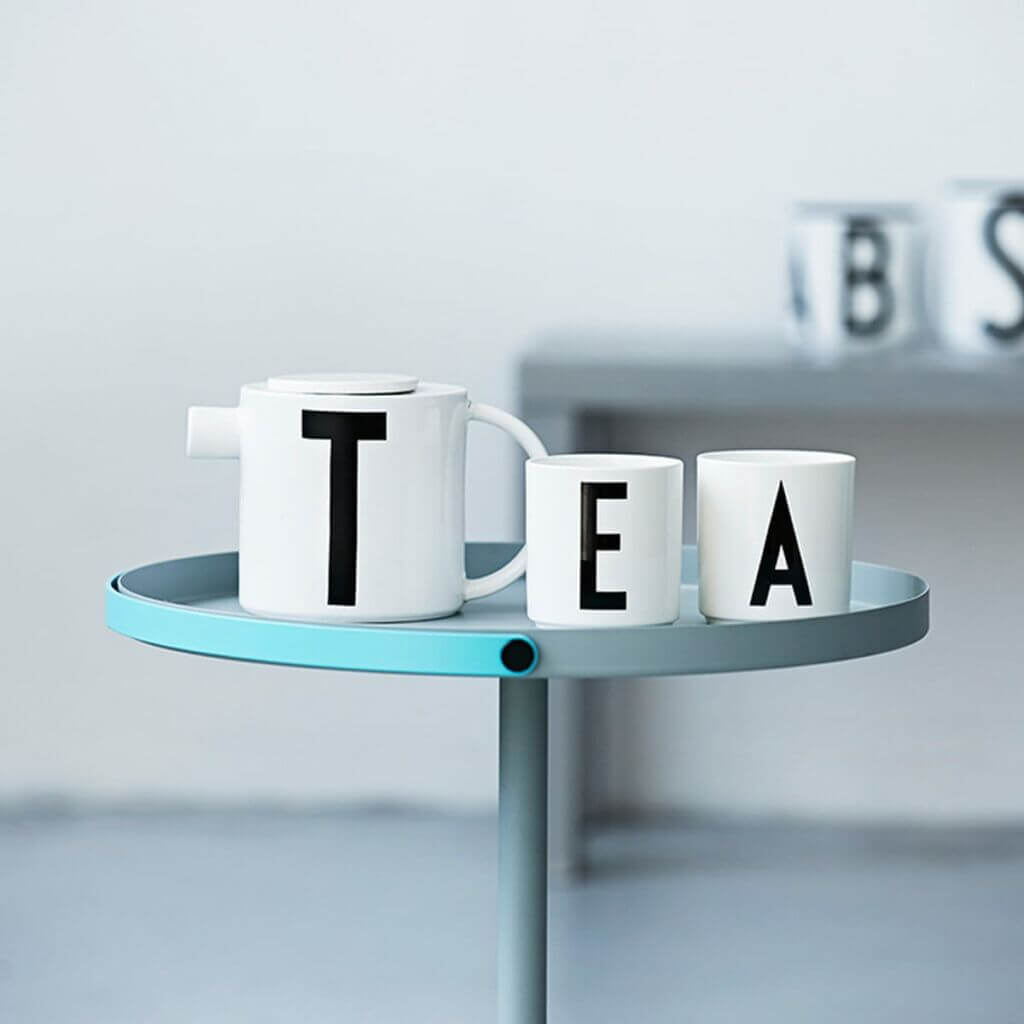 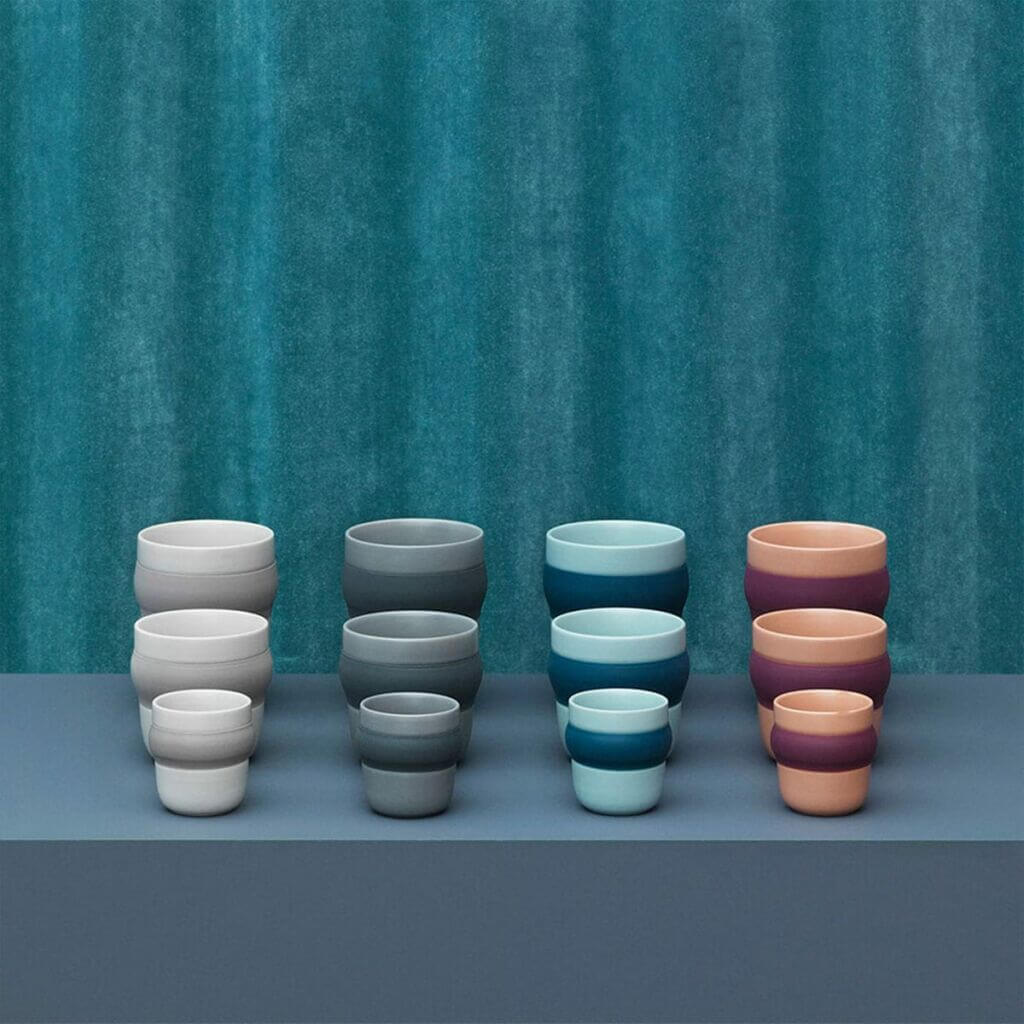 When choosing in what to serve your tea, it can be a traditional cup or a mug, and we recommend Design Letters Porcelain Cup A – Z , or Normann Copenhagen Obi cup/mugs. But if you want to be a bit more extravagant, the aroma and visual effect can be enhanced by a different glass – such as sherry or even a wine glass after a meal, instead of alcohol.