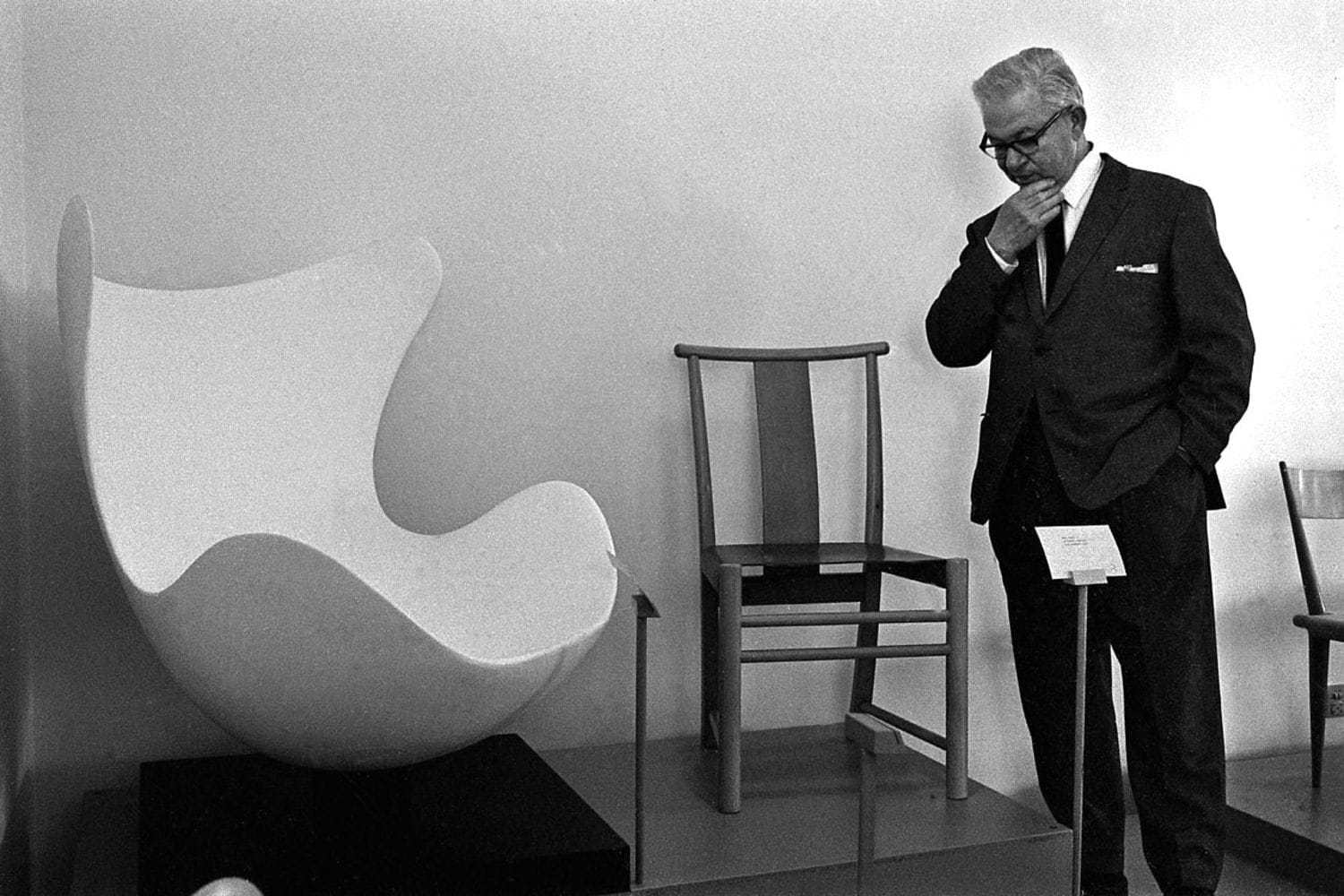 Arne Emil Jacobsen – one of most influential 20th century architects and designers – was born in Copenhagen on 11th January 1902. His father, Johan was a wholesale trader and his mother, Pouline worked as a bank clerk. Jacobsen wanted to be painter, but he was persuaded by his father to become an architect as it was a more practical and secure occupation. From 1924 to 1927 Jacobsen studied at Royal Danish Academy of Fine Arts.

His travels to New York, Italy and Germany acquainted him with work of Ludwig Mies van der Rohe and Walter Gropius, which had strong influence on his graduation project and other early designs. Bent plywood designs of Charles and Ray Eames were another major source of inspiration for Jacobsen as well as works of the Italian design historian Ernesto Rogers.In 1929 Jacobsen and his friend from Nærum Boarding School designed spiral-shaped, flat-roofed house in glass and concrete. The project won first prize in a Danish Architect’s Association competition for designing the “House of the Future”, which gave Jacobsen recognition and helped him to establish his own office.

It wasn’t until 1950s that Jacobsen took real interest in furniture design. Most of his product designs were created for architectural projects. Jacobsen is best known for his simple, light, compact and well proportioned chairs. In the early 50’s he created the Ant chair, originally designed for the canteen at healthcare company Novo Nordisk, and the Dot chair. The Egg and Swan Chair (1958) are one of his most iconic products and were designed for the lobby and reception areas of the Royal Hotel, in Copenhagen. The Grand Prix chair (model 3130) was introduced at the Designers’ Spring Exhibition at the Danish Museum of Art & Design in Copenhagen in 1957, and a few months later it received the Grand Prix at the Triennale exhibition in Milan. The Lily chair (model 3208), first introduced at the Danish furniture fair in 1970, initially was designed for the Danish Central Bank required a complicated moulding process. Another successful chair design – Oxford – was created in 1963 for the professors at St. Catherine’s College in Oxford.

People buy a chair, and they don’t really care who designed it.
Arne Jacobsen

In 1937, for the informational signs placed outside and within the Aarhus City Hall, Jacobsen designed a unique typeface, so that the shapes of the letters would match his desired overall aesthetic effect. A Bauhaus inspired typography that despite of its 75 years still looks incredible good.

Recently Danish design company DESIGN LETTERS was given the permission to revive Jacobsen’s stylish stroke on a beautiful porcelain cups and tableware, founded by former copywriter and journalist Mette Thomsen. Mette has always been a great fan of words and writing and in 2009 she merged it with her passion for design by establishing Design Letters.

Today DESIGN LETTERS carries a significant collection within living, stationery, furniture and kids designs – with and without letters. The brand is represented in more than 1000 design shops in 55 countries. GIR Store is one of them.