We bring you three intertwined designer dialogues with authors who were a part of the new GIR collection, and for the last one we present to you the members of three Croatian studios: Numen, Grupa and Redesign.

We have already written about GIR’s new ash wood collection, and talked about it in detail with Bojan Radovic. In previous weeks, in the first of the series of mixed interviews we talked about the work of Miljana Nikolic and Marko Oljaca, and in the second article we touched on the work of home-grown studios Autori, Presek and Chudes. This time we present three Croatian studios that were also directly involved in creating individual pieces of GIR’s young and unique brand of furniture: Numen, Grupa and Redesign.

Numen / For Use is a group which is collectively working in the fields of conceptual art, scenography, industrial and spatial design. The group was founded in1998, and its members are industrial designers Sven Jonke, Christoph Katzler and Nikola Radeljkovic. In 1999, they established Numen as a collective identity which covers all projects designed outside of the field of industrial design. Numen is characteristic for their experiments with impersonal design and radical formal reduction, deeply rooted within the tradition of high modernism, and they are mostly applied on different synergic projects of total design in Croatia. Since 2004 and onwards, after the set up of a wide range of projects for “Inferno” production in the National drama centre in Madrid, Numen / For Use have become intensively involved in scenography, so they continue to work for the theatres across Europe. Since 2008, the group shifts its focus towards the configuration of objects and concepts without previously defining the function, an activity that results in more hybrid and experimental pieces such as the N-Light series and Tape Installation. Concurrently with the publicly displayed projects, Numen / For Use group have received several international awards for their accomplishments in the field of industrial design.

Maša: What was your main inspiration for the piece that is in the collection, and how much did that idea change from the beginning until the completion?

Numen / For Use: The inspiration for the Klin table was a strange detail that is characteristic for an agricultural tool from the Alps, more precisely – the hayfork which is made by partially cutting a piece of wood into a “Y” shape. The two prongs of that fork are tightened by a wedge that separates them and a natural tendency of the ends to align with one another. In that way, the triangular structure was achieved and it seemed interesting for exploration. By analyzing the possibilities we realized that the structure in hand would be outstanding as a leg of the table. That idea remained all the way up to the materialization while the particular dimensions, details and form were evolving till now.

Maša: What do you consider to be the most difficult, and what would be the most exciting part of the process of designing furniture?

Numen / For Use: The most difficult, and at the same time, the most exciting part of the process is the transformation of the idea into a draft, a draft into a prototype, a prototype into a product. The idea itself is usually very simple, almost banal. The trouble is how to materialize it, by coordinating all conflicting demands.

Maša: How to harmonize material, technology, aesthetics, functionality and marketing, without losing the essence of an idea?

Numen / For Use: In that process, the designer has to stay open for Copernican turns up to the very launch of the product, but not the turns that are based on an unwanted compromise, but for innovative solutions in technology and organization, as well as the transformation of the object’s shape. If the project is not lost in that process, and it becomes more complex and stratified, and at the same time more comprehensive and purified – then we can say that the meaningfulness of the design has been attained.

Maša: Did you ever work with ash wood before and how challenging was this material for you?

Numen / For Use: We used ash wood sporadically and, until now, we hadn’t been in a situation in which that material was the carrier of the product’s identity code. Nevertheless, we shouldn’t forget the fact that wood is, technologically, a highly processed material and therefore not every ash wood is the same and not every ash wood is suitable for certain types of visual communication.  In the case of our product, ash wood is a particularly sophisticated material, accurately used and processed, protected in the way which isn’t ordinary, and in that sense it represents a display of skill, knowledge and experience of people at GIR and an obvious detector of the high level of the manufacturer’s commitment. For that reason, this collaboration is very valuable to us. 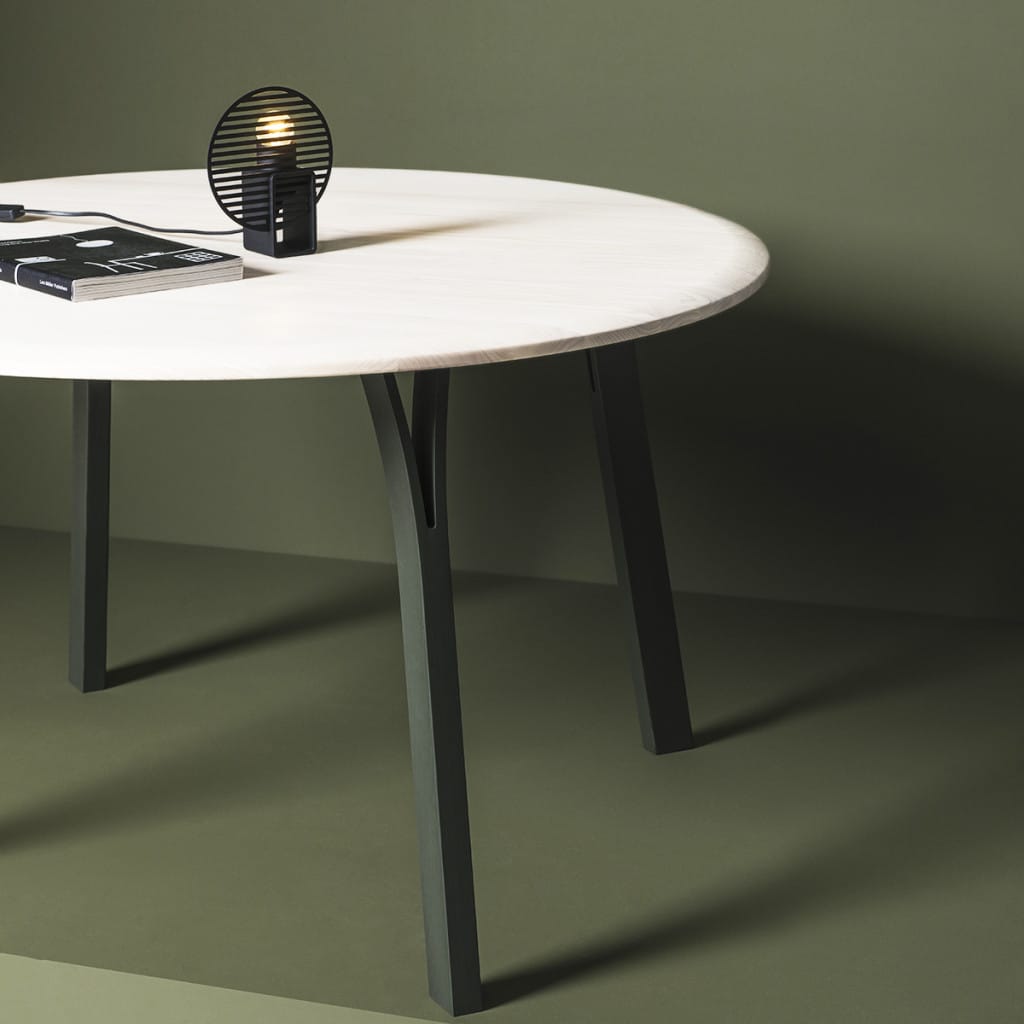 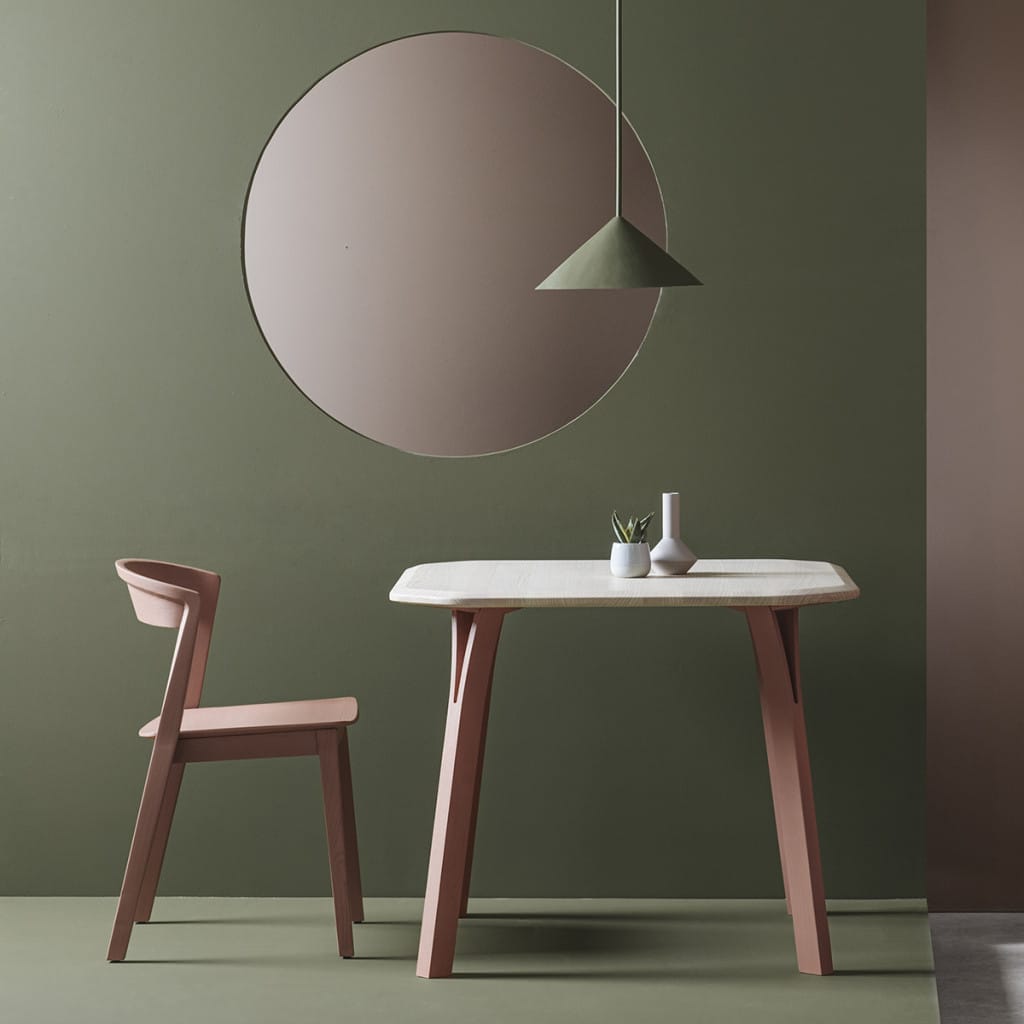 Grupa is designer collective that operates in the fields of product design, interior design, exhibition set-up and scenography. Members of Grupa are Filip Despot, Ivana Pavic and Tihana Taraba. For a number of years, they’ve been collaborating with Croatian and international furniture manufacturers such as factory Prostoria, Artisan, Shuma, and in 2010 they started developing their own brand “Grupa products” with which they produce and distribute lamps Baluna, Model, Aigato and ILI_ILI in the global and European market. They participate in both domestic and international juried exhibitions, and their works have been published in major international and Croatian journals. They received numerous prizes and awards.

Maša: Is this your first collaboration with GIR?

Grupa: A little more than two years ago we were contacted by Bojan Radovic who asked us if we would be willing to make a product for his new brand which was to be launched soon afterwards. We didn’t know Bojan then, nor were we familiar with GIR Company’s work. The whole plan, idea and the concept of the new brand which Bojan presented to us were formalistically very close to our aesthetics, which is why we immediately got into business, with lots of enthusiasm, and, more precisely, we created the chair collection “Brida”. 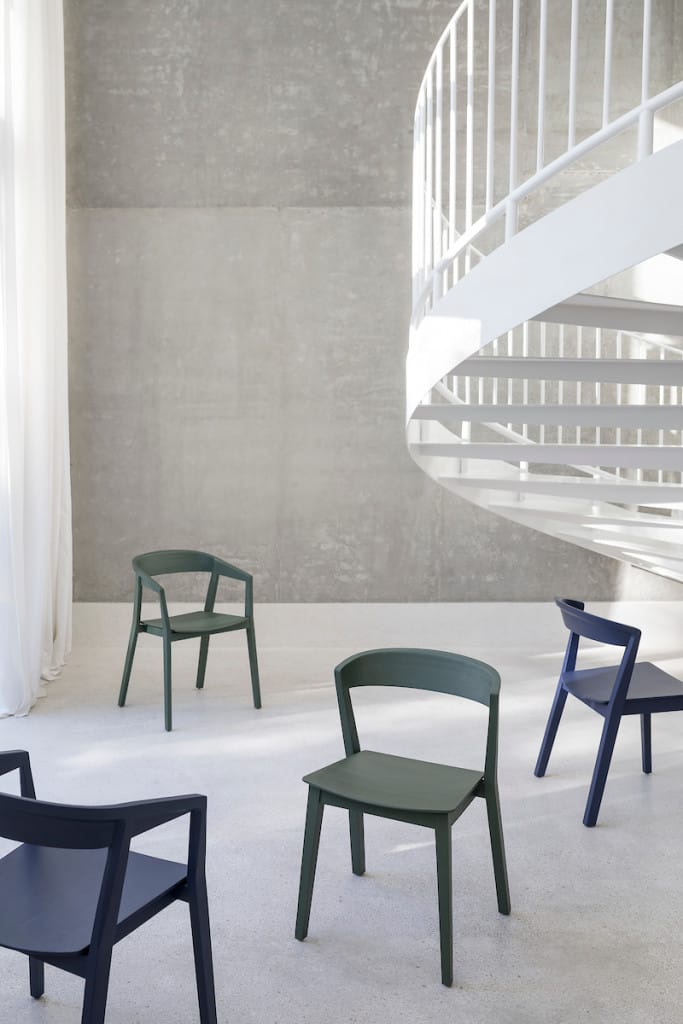 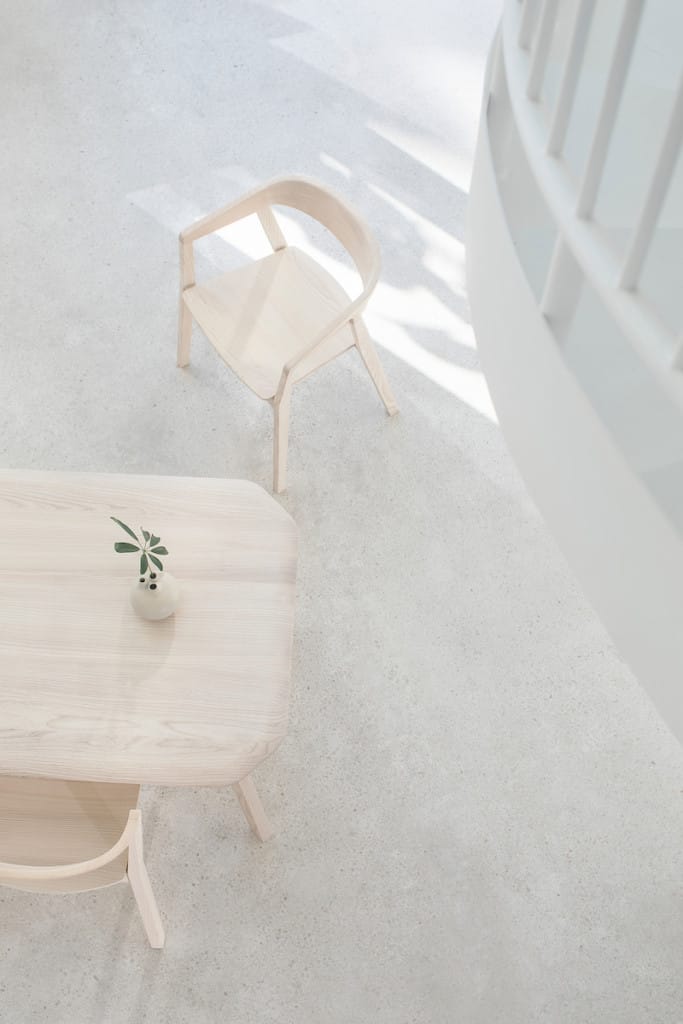 Maša: Do you get the sense that Croatian and Serbian markets of industrial design are different? If yes, in what way, and if not, why not?

Grupa: According to what we had the opportunity to see in Belgrade Furniture Fair, this year and the last, the markets are not that different; there are brands which invest in design and which stand out in the sea of generic products, however, there are really just a few of them. GIR is certainly the one which stands out from the crowd by its product design, the quality of the production and presentation, and on the Croatian side we should mention Prostoria, thanks to which our Croatian design is represented and recognizable on the international scene. Both of these markets have an emergence of small-scale designer accessories in which the designers are adapting to technology, and the products are technologically undemanding.

Grupa: Creating a product is always an exciting process, and in the case of Brida it was challenging and demanding. Given that GIR was only just in the making, we had no product of reference which we could follow, and we were aware that the typology of the product we design will, in a way, set the identity of the brand. Right away we were decided to do a chair, but not only one chair but a collection of chairs, so we had to be very careful with the designing and cautious not to disturb the balance and function of any version. The version without an armrest was perhaps the most demanding, because, regardless of the fact that its structure was weakened due to the loss of the armrest, we wanted to that the chairs can be stacked on each other. With the help of GIR’s development team we came to the solution of the joint that ensured firmness and functionality, and with this we avoided any kind of compromise. 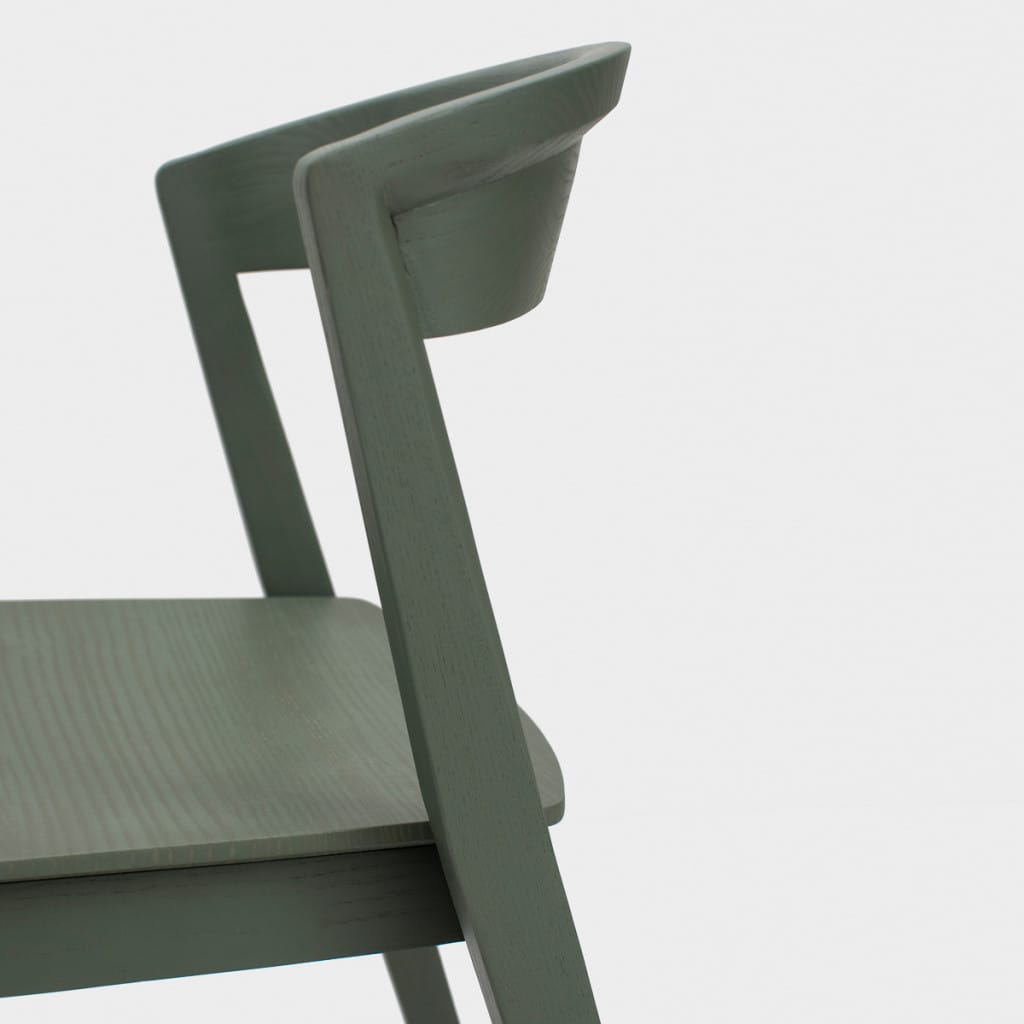 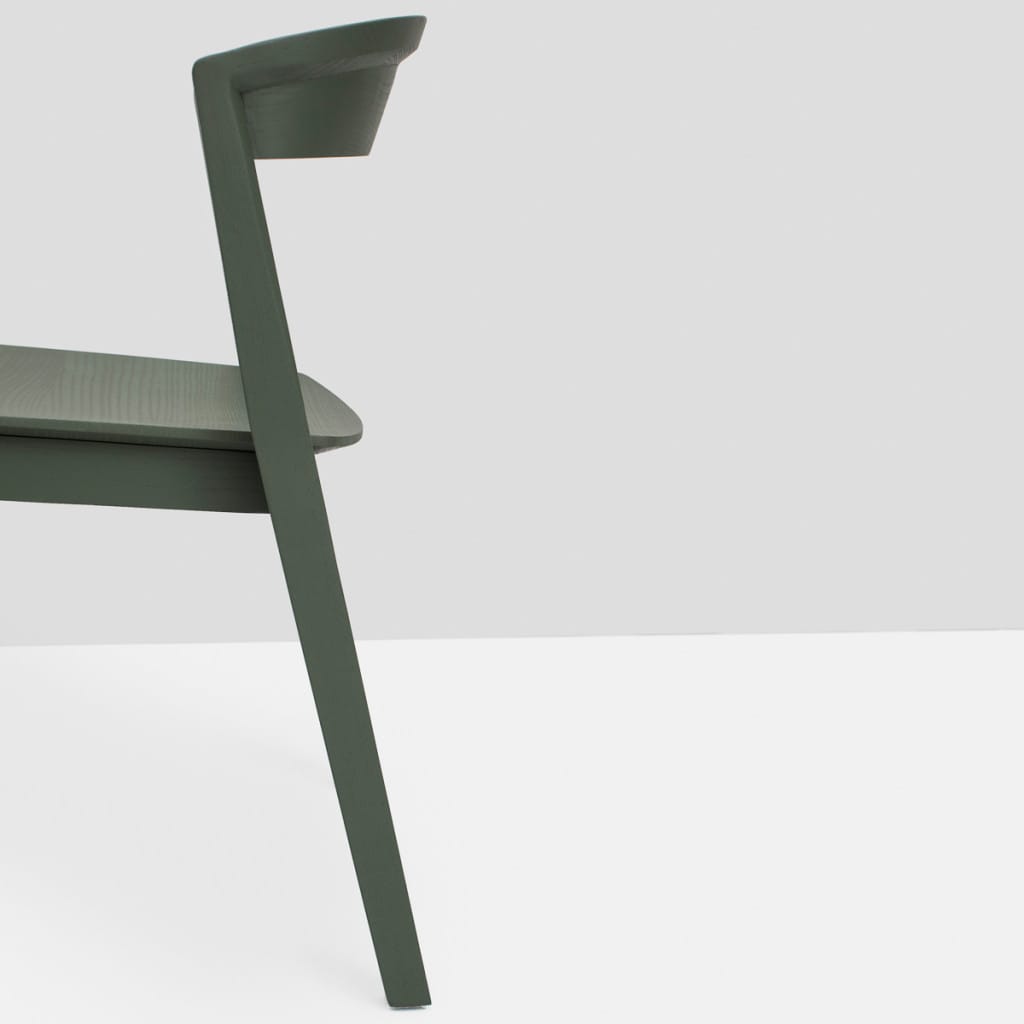 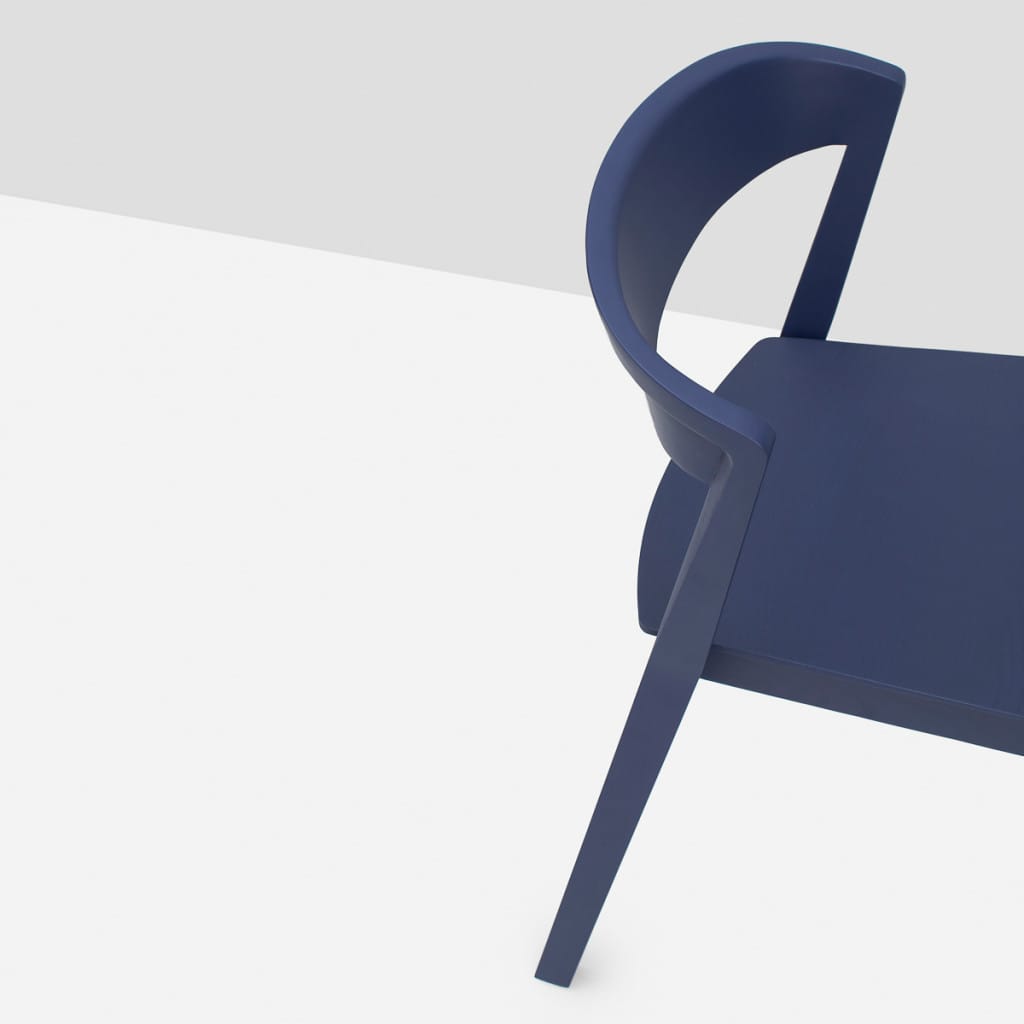 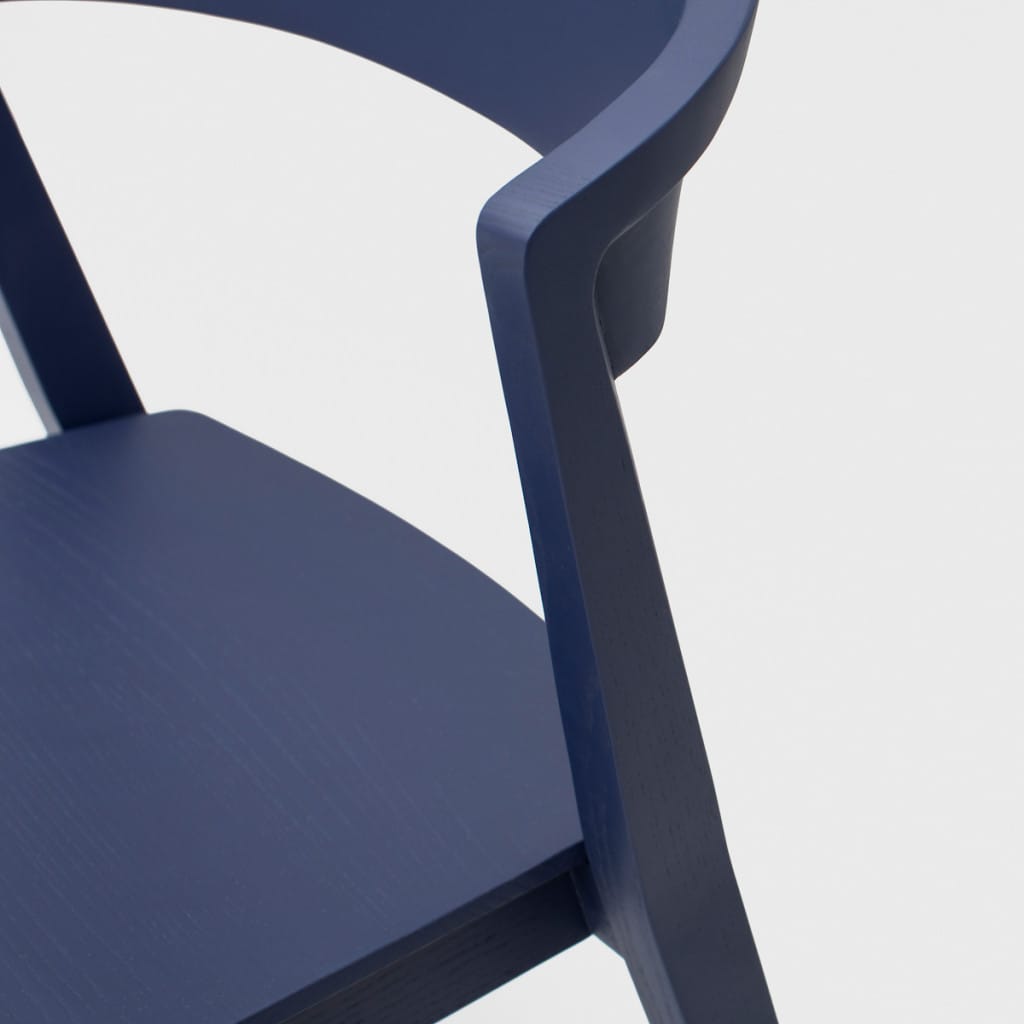 The collection consists of a chair with armrests, a chair without an armrest, a bar stool and a semi-armchair. The combination of modern technology of wood processing and precise handwork helped in accomplishing a form which is comfortable to sit on and surfaces that feel pleasant to touch.
The uniqueness of the series is revealed in the detail of a slantwise cut edge that wriggles through the continuing line which connects the backrest and the armrest. Clear angles and surfaces accentuate the feeling of immensity and firmness while, at the same time, achieving a visually purified, elegant and fluid form.
The selection of several colours and types of wood, and the addition of a furnished part if needed, can change the character of the product which is, in this way, easily adaptable to various usage requirements that may occur in residential and public spaces. 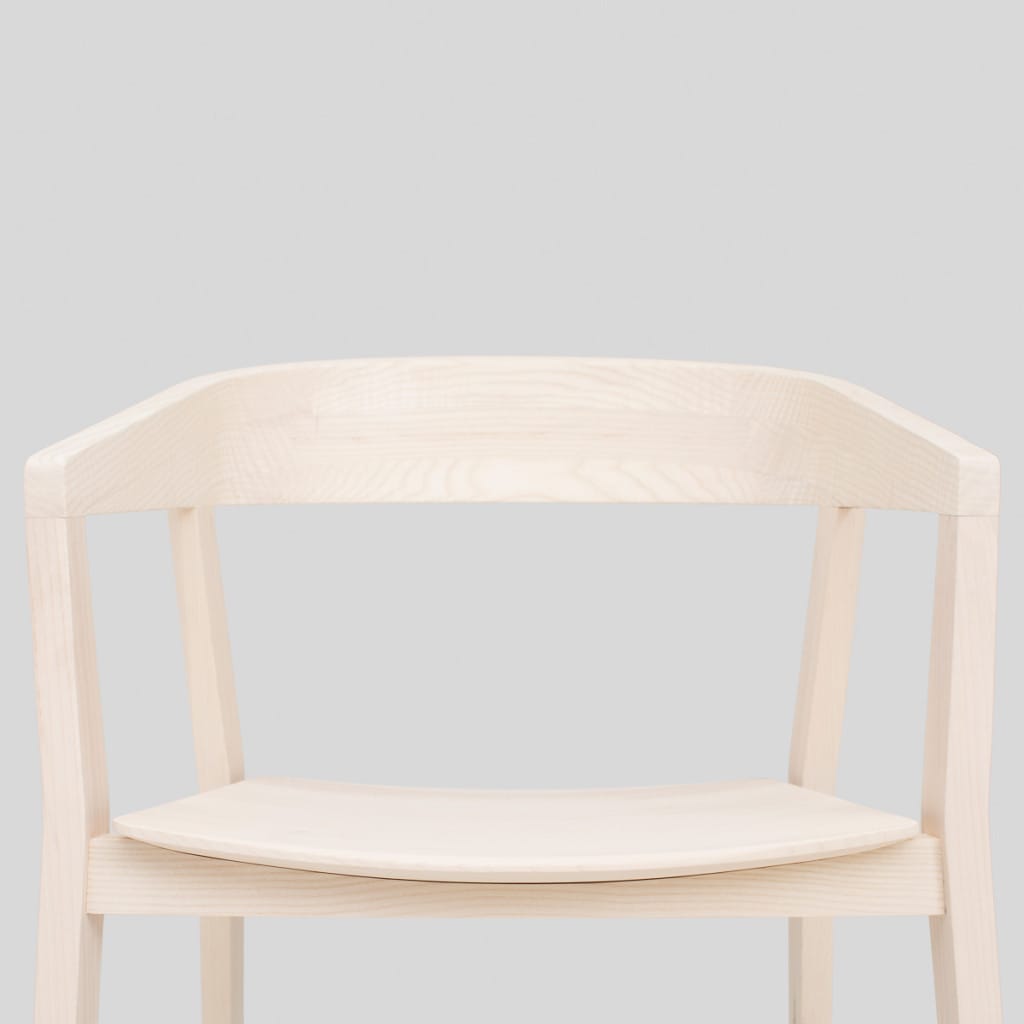 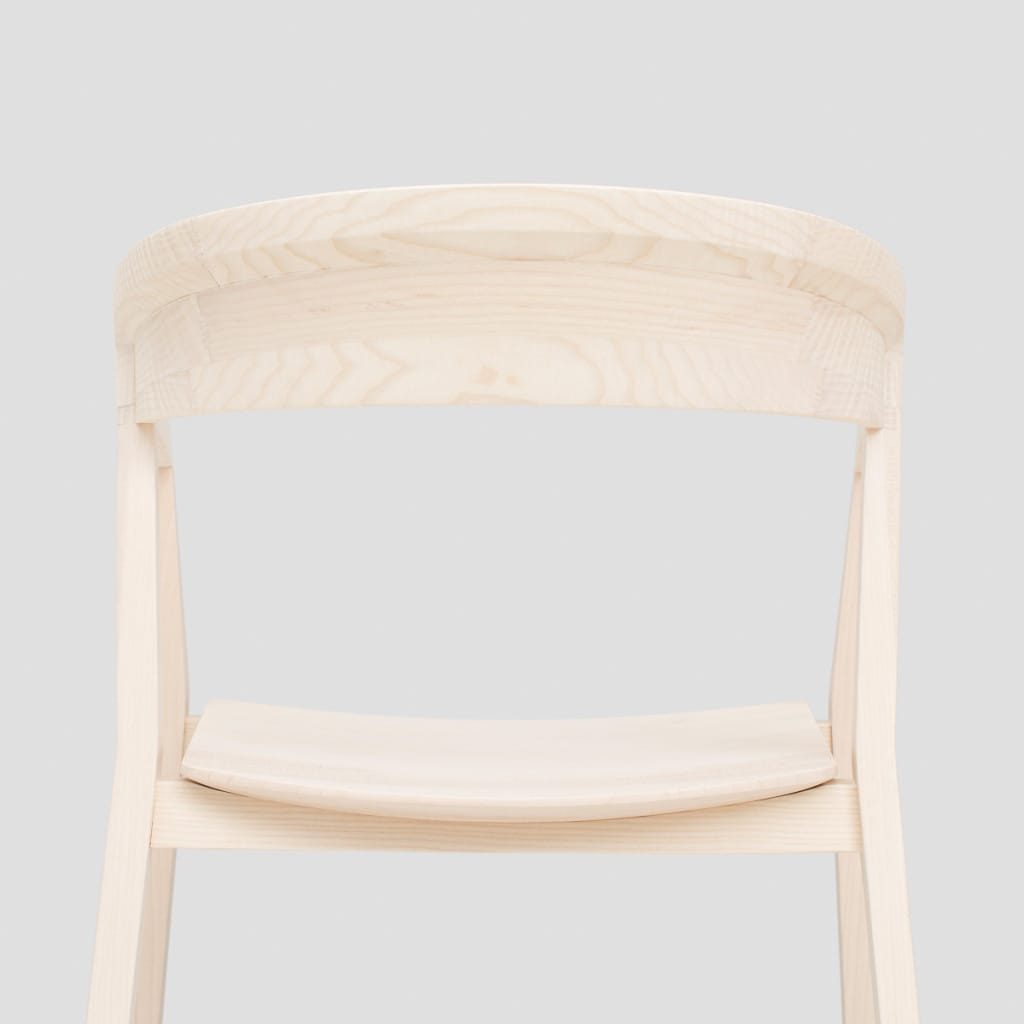 Redesign studio consists of Neven and Sanja Kovačić whose broad spectrum of interdisciplinary projects varies from recycling cardboard shelves to the sophisticated equipment for knee joints rehabilitation. The studio is concentrated on the product design and it is especially interested in natural aesthetics and logic and sustainable design. Last few years they are focusing on designing furniture which they develop in collaboration with prestigious regional manufacturers.

Design of the shelf originates from the logic of packing construction elements by the smaller-into-bigger principle. This approach results in tilting the lateral sides and gradual shortening of the storage space. Assembling the shelf module upwards creates a harmonious stepped structure which has a suitable shape to be positioned by the wall or freely in space. 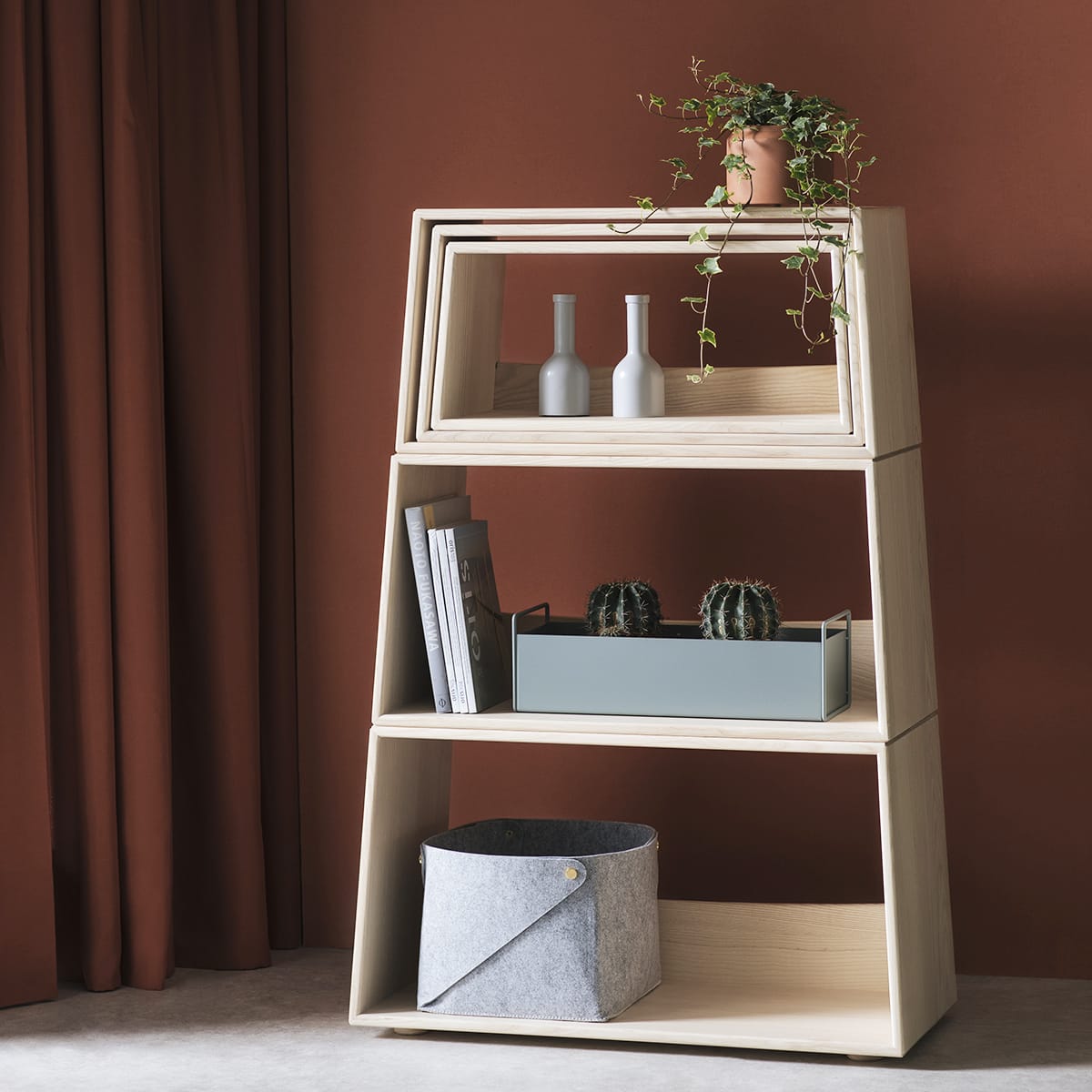 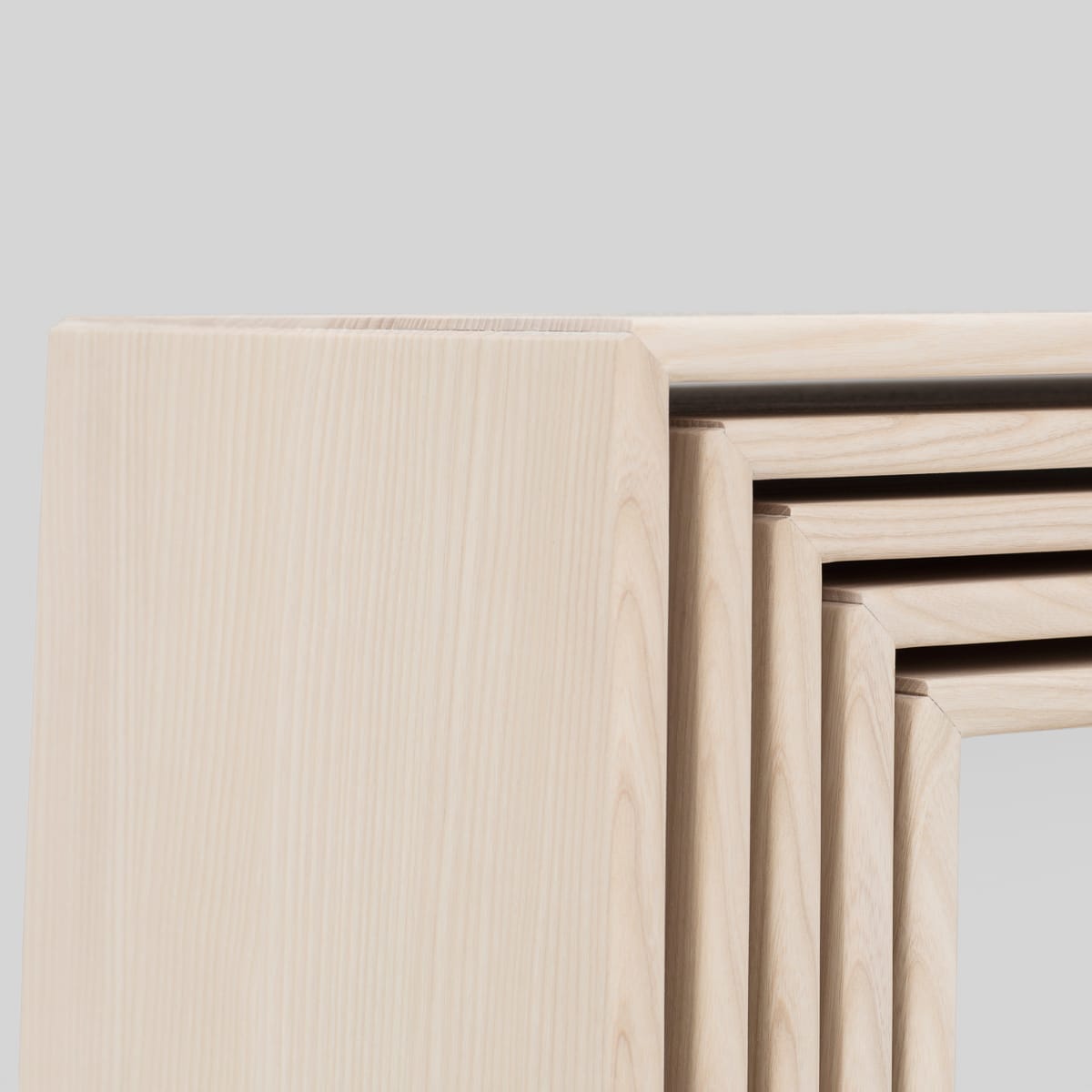 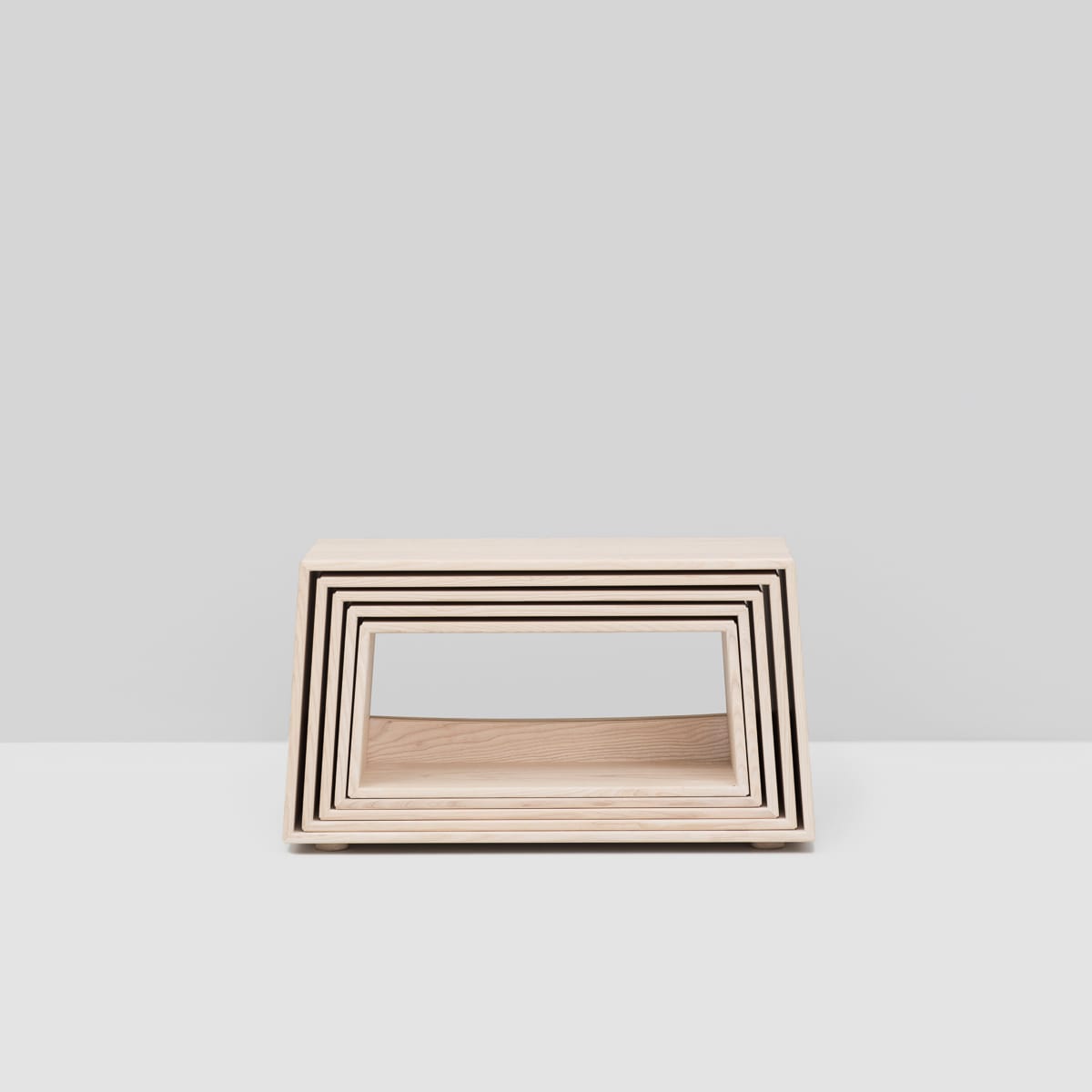 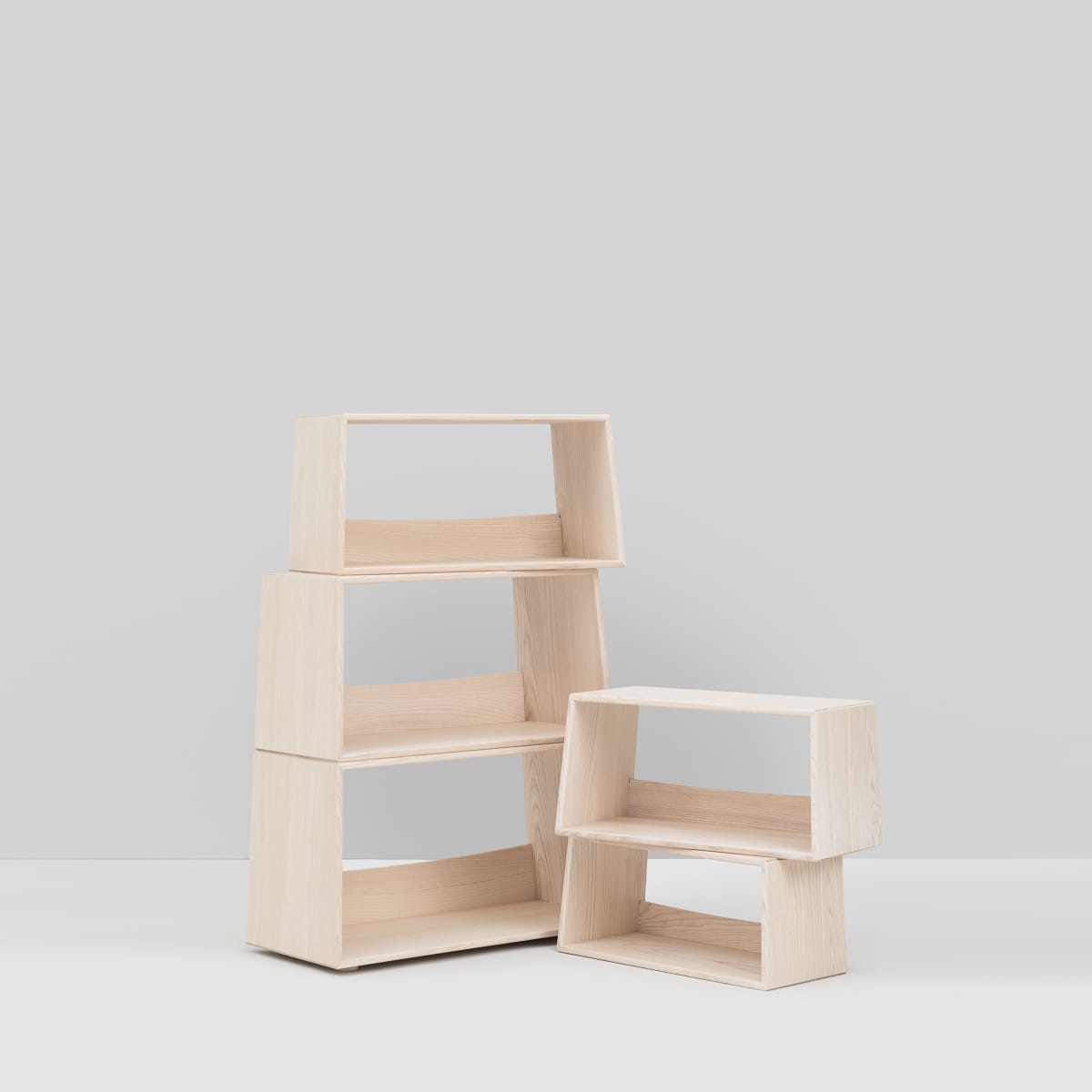 This chair with or without armrests represents a rarely used construction principle of connecting the backrest and front leg with a transversal reinforcement. The chair has an extremely compacted and fluid shape, and the intertwining of “locked” girders gives the chair a tremendous rigidity and surprisingly small weight. Woodlock chair is a technologically demanding solution made by the most advanced modern wood processing technology.

The collection of coffee tables typifies the ability of spatial positioning into compatible geometrical compositions. Simply joining two tables and aligning their base edges creates a desired appearance of the interior. Set of four coffee tables of different proportions varies from a wide and low with a hexagonal base to a tall and narrow with a triangle base. 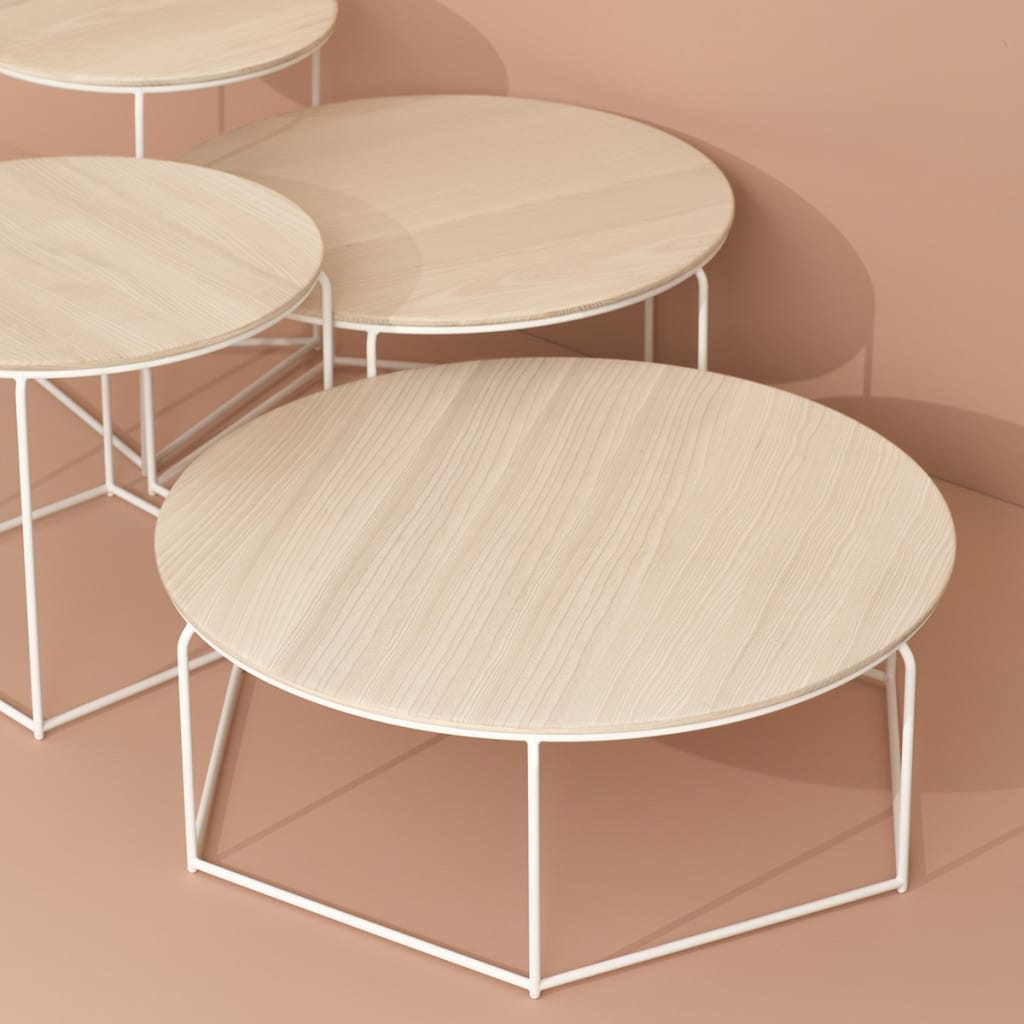 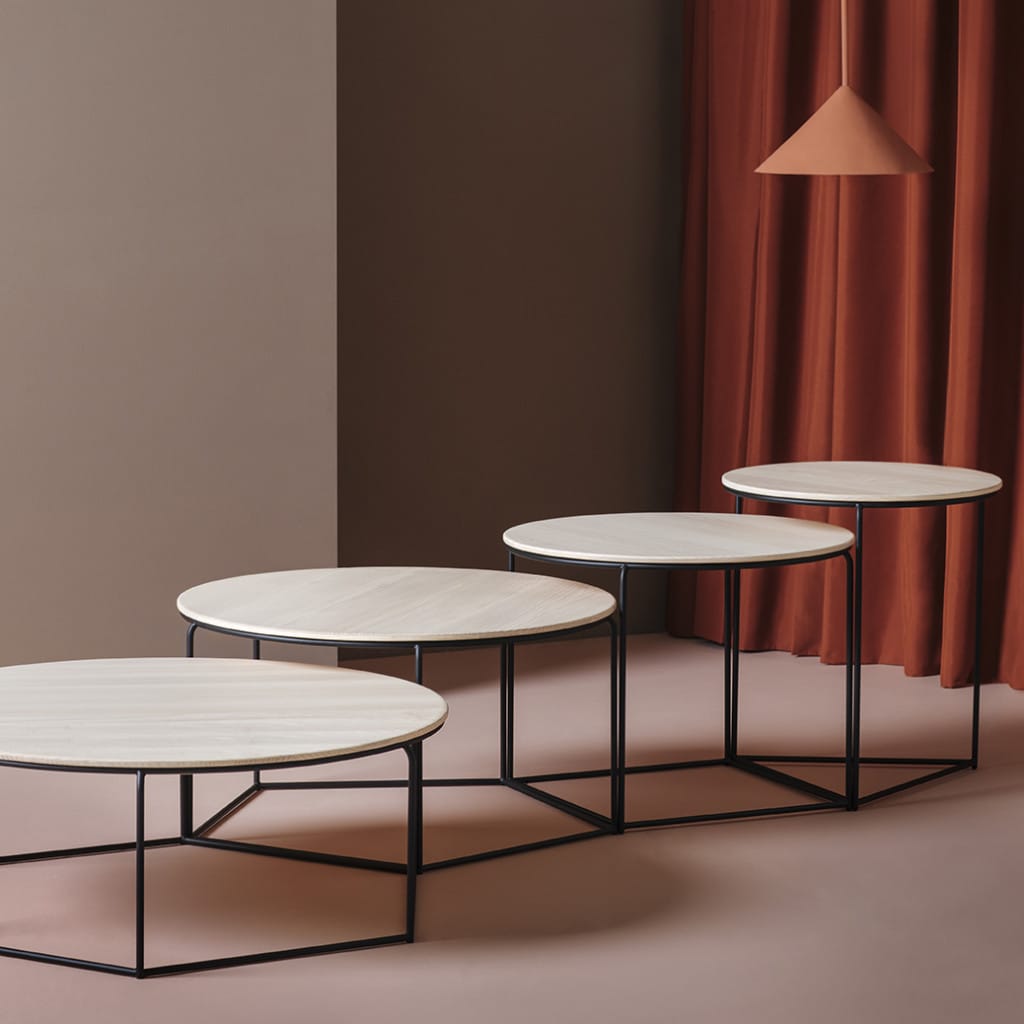 Maša Seničić for Before After
Photo :  Lumina