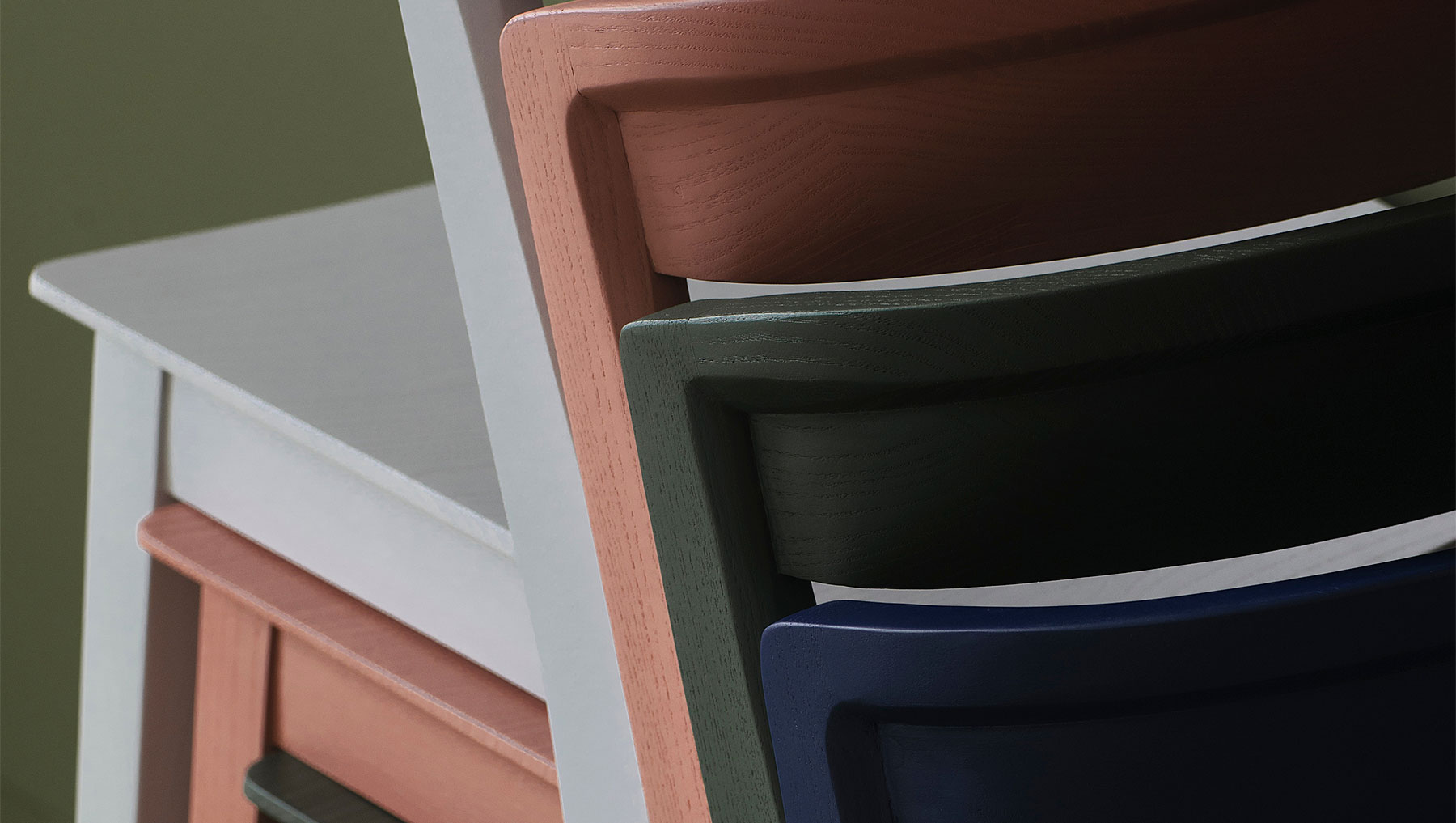 Centuries ago the subjects of colors and materials were deemed so important that many rulers introduced sumptuary laws to restrict the use of coveted colors and materials to particular strands of society. In the first century Rome, Emperor Nero banned everyone except himself from wearing purple and threatened miscreants with execution. King Henry VIII issued his own purple ban in sixteenth-century England while restricting cloth of gold to dukes and marquises, ermine and sable to nobles, and forbidding anyone below the rank of a knight from wearing silk shirts. After the Industrial Revolution, so many new dyes, paints, and materials were developed that bright colors and fancy fabrics were no longer the preserve of the wealthy.

Verner Panton believed that color played a greater role than form in design.

Working with wood is a central part of what we do at GIR. Searching for new colors and the explorations of structures take up a lot of time in the research and development phase before a new design sees the light of day.

Pink is everywhere, from fashion to furniture, the romance-associated color is everywhere, and with good reason. The color has a fascinating story, but a highlight of its features is studies showing that pink tones have a positive impact on our mood.

Pink is for boys
Today, pink is a usual suspect in gender stereotypes, as it’s often thought of as a “girly” color. However, this was not always the prevailing belief. In fact, up until the 1930s, the pale red was thought of as a color for boys: The bright red was a powerful color usually associated with men, why the lighter version, pink, was used for the smaller men: The boys.

Olive green is on-trend – and it appears it will be one of the topmost stylish colors for the next few years. It varies greatly in hue and saturation from cool to warm tones, giving you plenty of flexibility when decorating with olive green. Also known as cargo, sage and even chartreuse, the color is quite versatile. It’s the perfect shade to add to your living space. The olive tone works well with nearly any color and manages to warm up a room for fall.

Our take on olive
If you’re not ready to commit to an olive-green sofa permanently, add an olive-colored Oblo coat hanger in your hall to bring the tone in when you’re in the mood

Clay seems to be the trendiest color for interiors this year. It is a trend that has already begun in 2017 and has made Clay the protagonist of styling and interiors. A shade between orange and brown, Clay is a cozy color that helps to warm the house with just a few touches. The color of earth and nature that, although it may seem difficult, it is easy to combine in different ways, combining well with warm colors and materials such as wood, for a material effect, but also with cold colors such as blues and materials like concrete, creating an interesting contrast effect. This warm, earthy hue is both casual and refined.

Dark blue as a color can be often confused with Navy Blue, as they are closely related. Yet, the cool, deep shade of dark blue is unique enough to stand on its own. On the outer bands of the color wheel, dark blue is often used to represent elegance, authority, and intelligence. Blue is the favorite color of all people. It’s nature’s color for water and sky. Today, blue is embraced as the color of heaven and authority, denim jeans and corporate logos. It is cold, wet, and slow as compared to red’s warmth, fire, and intensity.

Blue has more complex and contradictory meanings than any other color. These can be easily explained by pinpointing by the specific shade of blue. The Dark blue is bold on its own, but the versatile hue changes when paired with different colors. These darker moody colors are perfect for custom built-ins and kitchen cabinetry. It’s ideally using them in a room with an abundance of natural light.

”Blue is the only color which maintains its own character in all its tones… it will always stay blue;”
Raoul Dufy, French Fauvist Painter, 1877-1953

Burgundy is a deep reddish-brown shade inspired by wine from the Burgundy region of France (which is named after the ancient Germanic tribe, Burgundians). The deep, dark red is the result of mixing red with a dash of green and blue, resulting in brown with purple undertones. It is more sophisticated and serious than true red, symbolizing ambition, wealth, and power.

In 2019, expect to see bold, Burgundy that infuse life into space without overwhelming it. It’s comforting and cozy qualities, while simultaneously energizing a space with their rich color. Burgundy works well with shades of gray, such as light gray or charcoal gray. It also pairs beautifully with dark blue, clay and olive.

Colors are special – not least in their powerful way of giving a room personality.

Any design scheme can benefit from a hue that’s versatile enough to work well with neutrals and more playful, vibrant shades. Gray is that kind of color, whether you’re going for a sophisticated aesthetic or a more laid-back vibe. People began to incorporate calm grey undertones, which are associated with mindful living and smart choices. These coined “introspective shades” regard a color’s undertone as equally important to the shade itself. Dark blue, burgundy, and clay with grey undertones create a subdued sense of tranquility in the home. 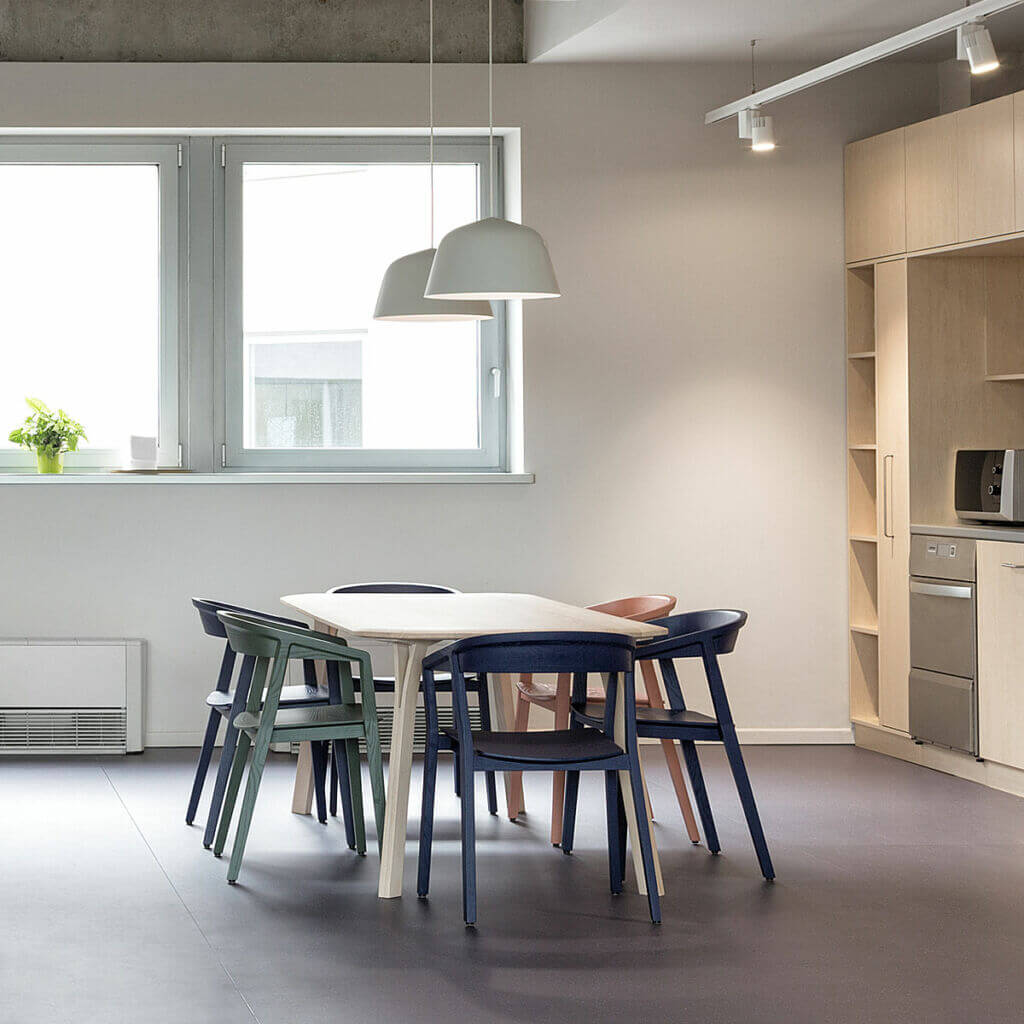 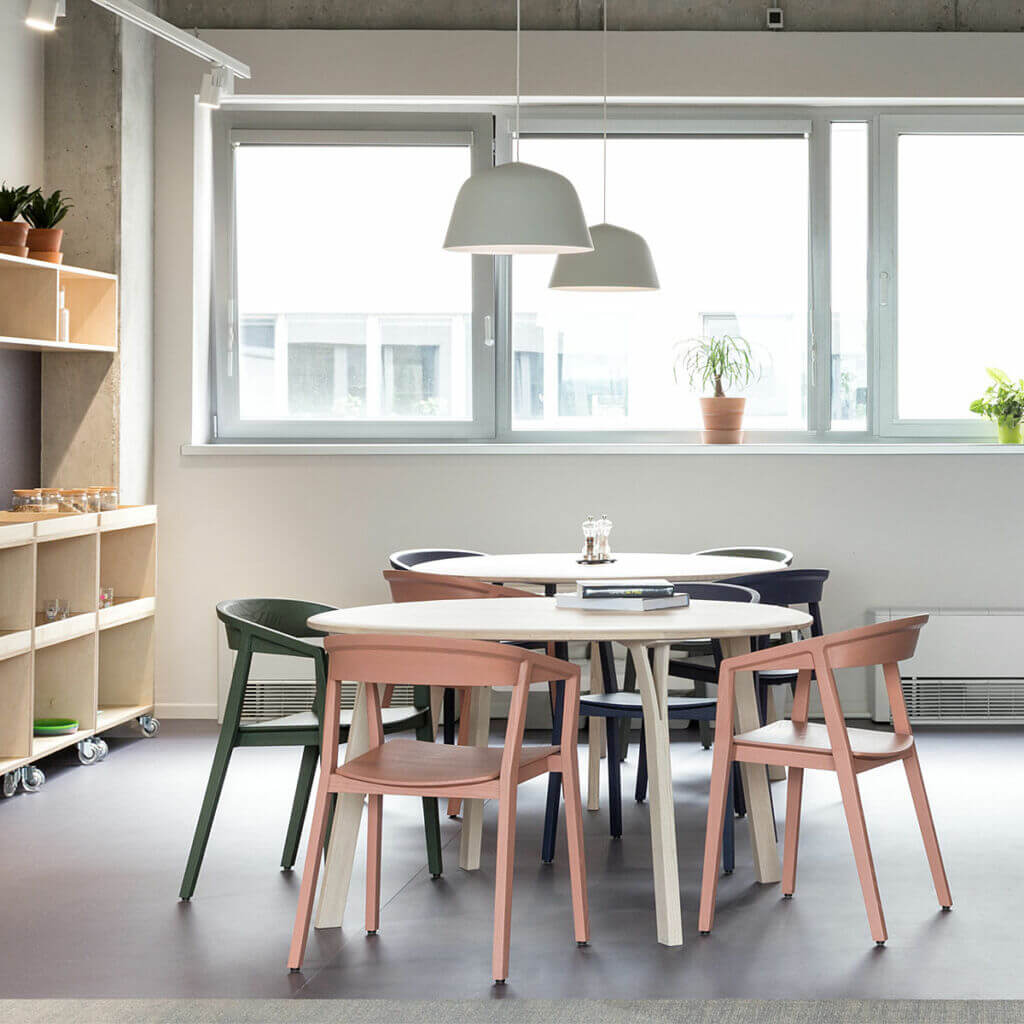 The result of combining grey with clay or burgundy is very contemporary and elegant, perhaps easier to dose than others. These warm colors match well with dark gray but above all, with a lighter gray for a more sober, elegant and luminous effect. In this case, burgundy or clay help to warm a cold color like gray.

There are plenty of opportunities to explore the many possibilities of color. Try it out in your home with artful details or go all the way and install a Klin table with colored legs and one of our colored chairs, and let the color change the entire dining room.
Maybe you will find that it lifts the mood of your home as well.