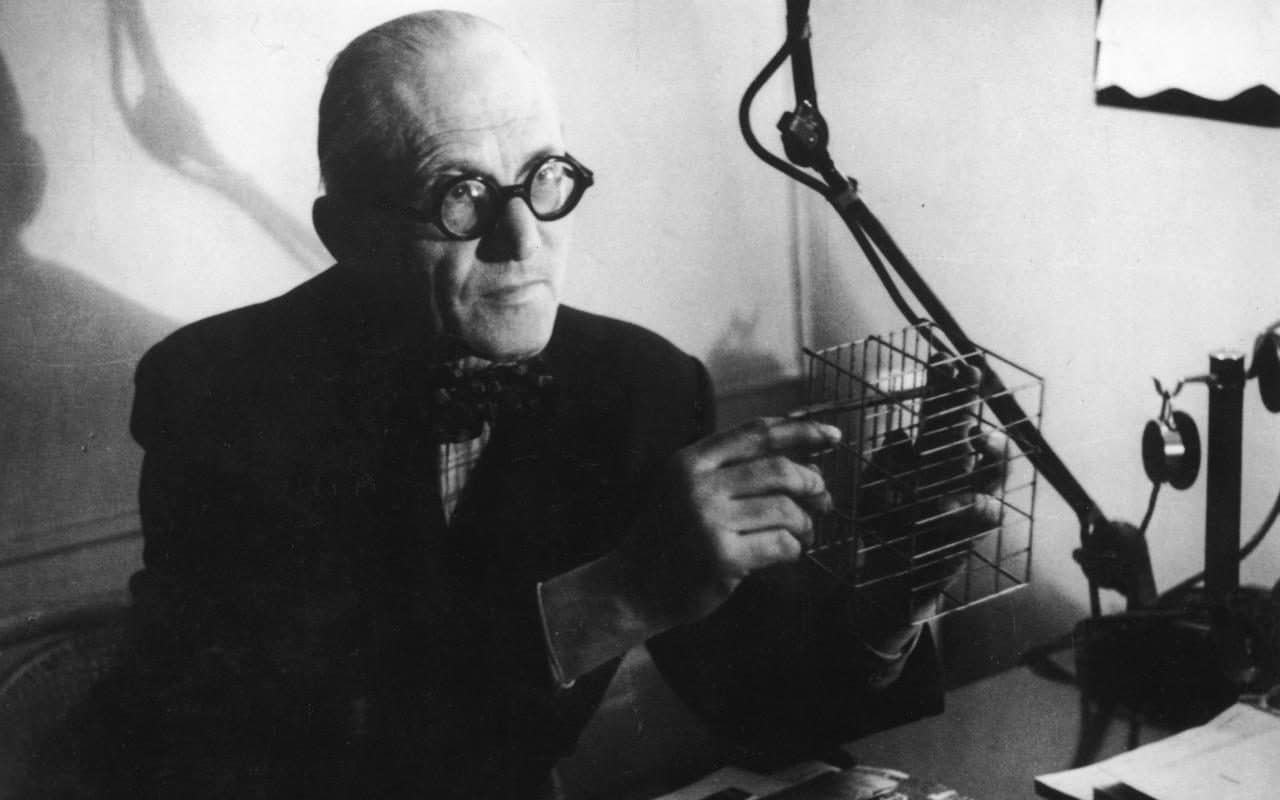 Charles-Édouard Jeanneret, better known as Le Corbusier, was a pioneer of modern architecture and a leader of the International Style. The prominent architect was also an accomplished painter and writer.

Le Corbusier was a deeply radical progressive architect, a futurist who was equally and fundamentally rooted in history and tradition. He was intensely curious, constantly traveling, drawing, painting, and writing, all in the pursuit of becoming a better designer. As a result, he found intellectual ways to connect his historical foundations with what he learned from his contemporaries.

“I am anti-school….I left school at 13 because schools were very mean in the past; they were no fun.”

To learn from Le Corbusier’s creative search and to see how he evolved as an architect, one must understand where he started. He never attended a university or enrolled formally in an architecture school. His architectural training was mostly self-imposed and was heavily influenced by the teachings of his secondary-school tutor Charles L’Eplattenier, who taught him the fundamentals of drawing and the decorative arts at the Ecole d’art in his hometown of La Chaux-de-Fonds in Switzerland.

However, he reported later that it was the art teacher L’Eplattenier who made him choose architecture. “I had a horror of architecture and architects,” he wrote. “…I was sixteen, I accepted the verdict and I obeyed. I moved into architecture.”

Upon Jeanneret’s graduation from secondary school in 1907, L’Eplattenier encouraged him to leave behind the rural landscapes and broaden his world view by making a formal drawing tour through northern Italy. This pedagogy of learning to draw and learning through experience was likely influenced by the long tradition of the Grand Tour, a rite of passage for European aristocrats. Travel was considered necessary to expand one’s mind and understanding of the world. Architects, writers, and painters seized upon the idea, taking a standard itinerary across Europe to view monuments, antiquities, paintings, picturesque landscapes, and ancient cities.

In the following years, he would visit many European cities, including Paris, where from 1908-10 he worked in the studio of architect Auguste Perret, a pioneer in the use of reinforced concrete. Jeanneret then moved on to Berlin, where between 1910-11 he worked in the office of Peter Behrens, arguably the most important architect in Germany at the time, whose great AEG Turbine Factory, one of the seminal early works of modern architecture, was nearing completion. There Jeanneret first met Gropius and Mies van der Rohe, both of whom were also simultaneously employed by Behrens. In 1911, the Wasmuth Portfolio of Frank Lloyd Wright’s work was published in Berlin, and it is said that on the day a copy arrived in Behrens’ office, all work came to a standstill. Le Corbusier was later known to have owned a copy of the Wasmuth Portfolio.

During World War I, Le Corbusier taught at his old school in La-Chaux-de-Fonds, He concentrated on theoretical architectural studies using modern techniques. In December 1914, along with the engineer Max Dubois, he began a serious study of the use of reinforced concrete as a building material. He had first discovered concrete working with Auguste Perret in Paris, but now wanted to use it in new ways.

“Reinforced concrete provided me with incredible resources,” he wrote later, “and variety, and a passionate plasticity in which by themselves my structures will be rhythm of a palace, and a Pompieen tranquility.” This led him to his plan for the Dom-Ino House (1914–15). This model proposed an open floor plan consisting of three concrete slabs supported by six thin reinforced concrete columns, with a stairway providing access to each level on one side of the floor plan. The system was originally designed to provide large numbers of temporary residences after World War I, producing only slabs, columns and stairways, and residents could build exterior walls with the materials around the site. The frame was to be completely independent of the floor plans of the houses thus giving freedom to design the interior configuration. The model eliminated load-bearing walls and the supporting beams for the ceiling.

He described it in his patent application as “a juxtiposable system of construction according to an infinite number of combinations of plans. This would permit, he wrote, “the construction of the dividing walls at any point on the façade or the interior.”

It was the first step towards Le Corbusier’s new theory of modern architecture. He immediately used concrete for the structure of his next commission, the Villa Schwob (1916), which would prove to be the last of his works in La-Chaux-de-Fonds. Though given a massive budget, Jeanneret fought bitterly with his client, and in 1917 moved to Paris. Le Corbusier moved to Paris definitively in 1917 and began his own architectural practice with his cousin, Pierre Jeanneret (1896–1967), a partnership that would last until the 1950s, with an interruption in the World War II years. 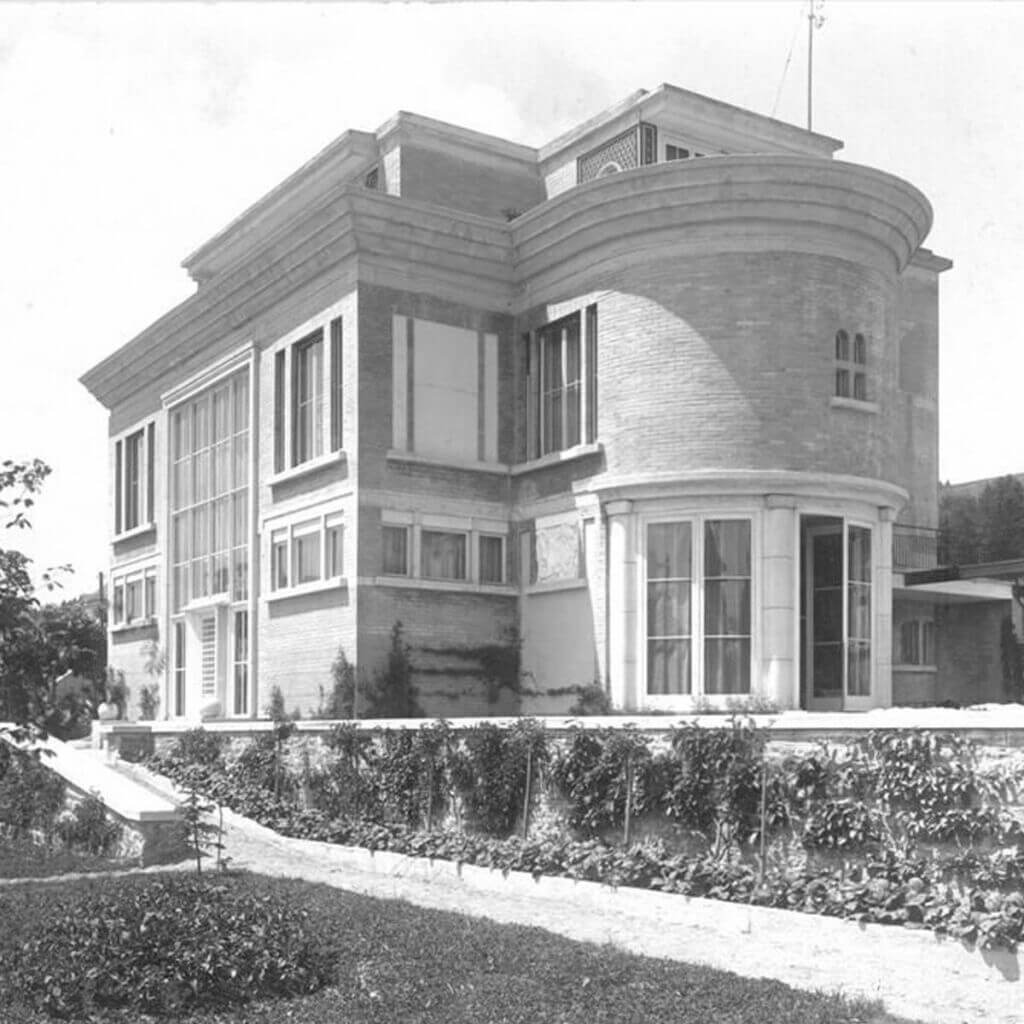 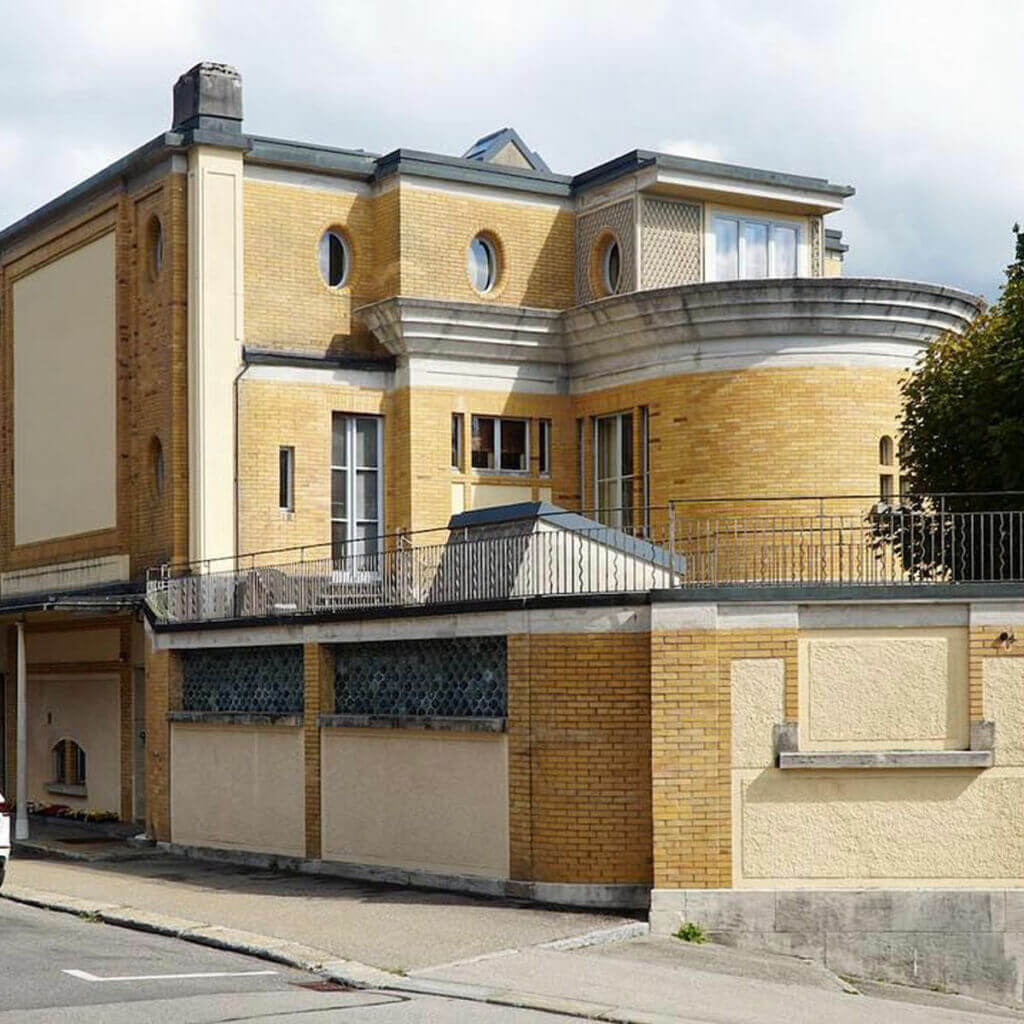 “Space and light and order. Those are things that men need just as much as they need bread or a place to sleep.”

In 1925. Le Corbusier revealed these concepts in built form for the general public in his own Esprit Nouveau pavilion at the Exposition International des Arts Décoratifs et Industriels Modernes, the world’s fair in Paris that eventually gave us the term Art Deco. Le Corbusier distinctly set his architecture, which he considered socially transformative, in contrast to the commercialized, packaged style of the rest of the fair, which he regarded as a flashy, updated classicism. His pavilion, which was underwritten by the auto manufacturer Voisin, included inside an adaptation, for Paris, of his 1922 Contemporary City for Three Million Inhabitants, called the Plan Voisin. The pavilion drew ire from fair officials who attempted to fence it off; only Le Corbusier’s appeal to the Minister of Fine Arts permitted its opening.

Of the many structures completed by Le Corbusier in his early period, none is more successful in demonstrating his five points of architecture than the Villa Savoye, completed in 1931. Raising the main living spaces off the ground, the lowest floor features a swooping curve designed to accommodate the turning circle of a car, while the roof can be accessed by a ramp. However, while the Villa Savoye marks the high point of Le Corbusier’s early ideals, it also marked the end of that period of his work. In his book Modern Architecture: A Critical History, Kenneth Frampton separates Le Corbusier’s body of work into two chapters, leading up to 1930 and from 1930-1960. Frampton argues that in the Weekend House completed in the suburbs of Paris in 1935, “the vernacular was being consciously embraced for its material articulation, for its capacity to enrich the abstract and reductive nature of the purist style… From now on the juxtaposition of contrasting materials became an essential aspect of Le Corbusier’s style, not only as an expressive ‘pallette’ but also as a means of building.”

The following year, 1928, he helped found the International Congresses of Modern Architecture, an organization of mostly European architects created with the purpose of formalizing and disseminating the principles of modern architecture. Among its members were Pierre Jeanneret, Pierre Chareau, Gerrit Rietveld, Walter Gropius, and Alvar Aalto. Le Corbusier remained an influential member throughout most of the group’s early history, though he left the organization in 1955, four years before it was dissolved.

During the 1930s Le Corbusier’s commissions in France began to dry up due to the Great Depression. He continued to write, opportunistically hoping to get his urban plans adopted by some governmental authority. His politics thus began to take a dangerous turn. Previously an enthusiast of capitalism and the major industrialists as the prime movers of civilization in the aftermath of the war, Le Corbusier flirted with Communism beginning with his visits to the USSR, and dropped much of his support for capitalism after the 1929 stock market crash.

Having fallen out of Stalin’s favor in the early 1930s with the adoption of Socialist Realism in the Soviet Union, Le Corbusier began to drift towards Fascism. In his urban plans, beginning with the publication of The Radiant City in 1930, Le Corbusier described the cities he imagined as ruled by an “architect-dictator” and frequently titled his schemes the “plan directeur.” He accepted invitations from Mussolini to lecture in Rome in 1934. When the Vichy regime came to power in France in 1940, Le Corbusier offered his services to Marshal Philippe Petain’s pro-Nazi government, along with grand schemes for the redevelopment of Algiers, but was rebuffed. He abandoned hopes of collaboration in 1942, marking his disappointment with a simple “Adieu, dear shitty Vichy.” 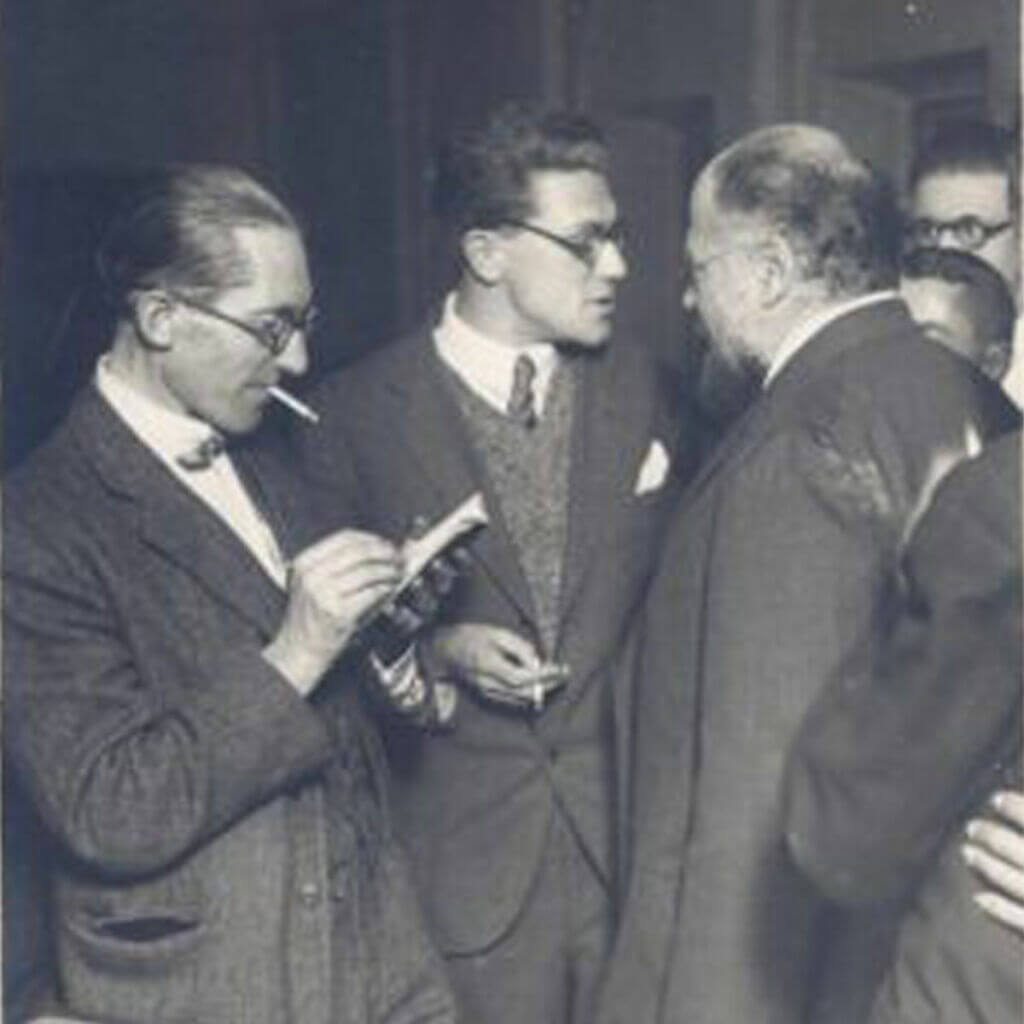 Le Corbusier at a conference in Moscow, 1928

In 1945, Le Corbusier was awarded the commission for a new large housing project in Marseilles, which he called the Unité d’Habitation. He had hoped to make the design the linchpin of housing in his vast urban schemes from the late 1930s onwards. These would never be truly realized as part of a larger urban redevelopment, although the idea of large communal housing blocks full of individual apartments and set within a park-like setting inspired many of his disciples, such as Lúcio Costa and Oscar Niemeyer in their designs for the new capital Brasilia, to use them with abandon.

The Unité also became one of the major inspirations for public housing in the United States, where such apartment blocks became the symbols of some of the worst of the urban planning initiatives engineered by officials such as Robert Moses. The Unité in Marseilles, the first of several that Le Corbusier built around Europe in the 1940s and 1950s, has, however, often been admired for its ability to foster a community among its residents, with its corps of supplemental commercial and service sectors: a grocery store, primary school, daycare, hotel, laundromat, gymnasium, and roof terrace. The Unité in Marseilles, for which ground was broken on the 14th of October 1947, was completed exactly five years later, opening on the same day in 1952.

Far from being a purveyor of concrete boxes, he was first and foremost an artist.

Whatever the materials he worked in, and whatever the brief – villas, museums, social housing, churches, civic monuments, a Palace of the Soviets for Moscow, a dramatic facelift for Algiers or a hospital in Venice – and whether built or not, Le Corbusier’s designs were always original. Far from being a purveyor of concrete boxes, he was first and foremost an artist whose best known and most expressive medium was architecture. Imbued with a creative spirit and a guiding intelligence very much their own, these have always been more than demanding buildings to emulate or copy.

Architect, city planner, painter, furniture designer, writer, publisher, and amateur photographer and filmmaker, Le Corbusier introduced unconventional ideas that helped shape modern society. As suggested by Kenneth Frampton “no single scholar has been able to master all the ramifications” of Le Corbusier’s creativity, not the least because Le Corbusier’s perspectives and interpretations of the world and its interaction with architecture often changed and remain difficult to pin down. Thus his work continues to be studied, criticized, and reinterpreted today, gaining new meanings and influencing generations to come.