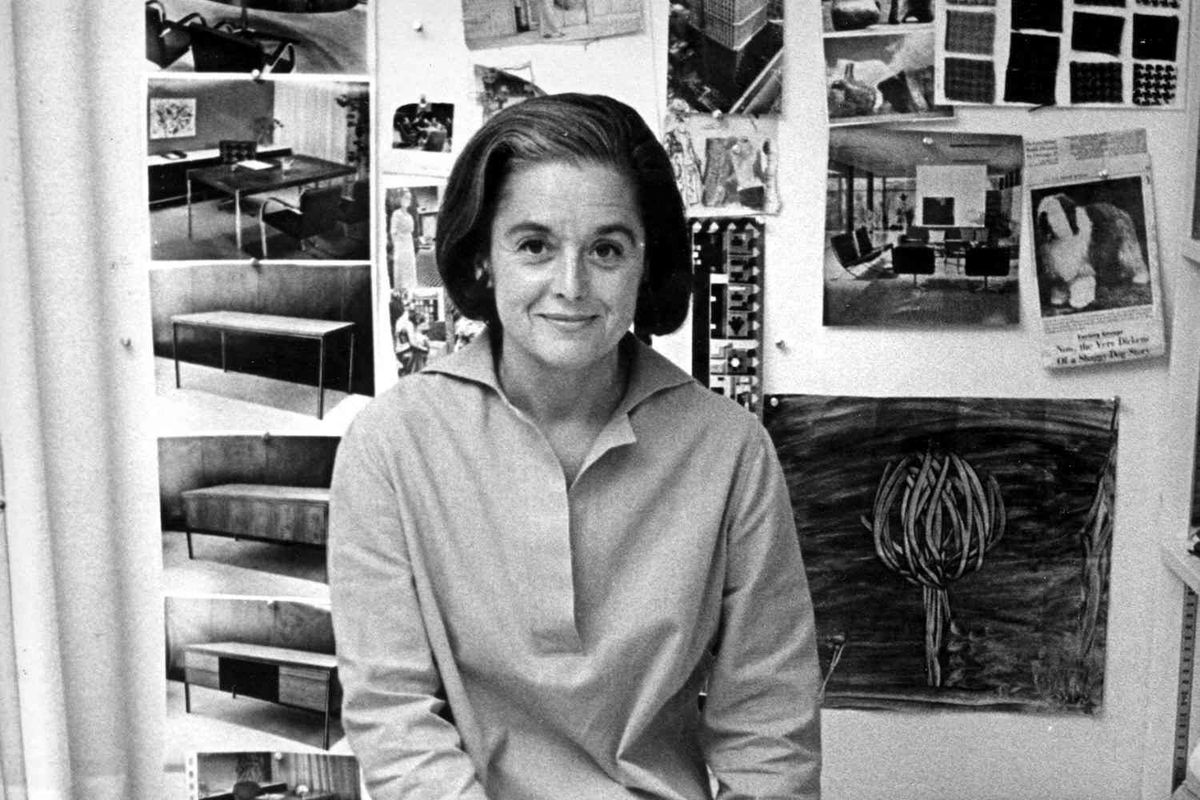 In a male-dominated design world of the post-war modern era, Florence Knoll Basset has been known as a leading woman in the industry for decades.

Florence Margaret Schust or better known as just Shu among her friends and family was an American architect, interior designer, furniture designer, and entrepreneur who has been credited with revolutionizing office design and bringing modernist design to office interiors. On January 25th. 2019, she passed away at the age of 101. This blog post is about her design philosophy and celebrates her life and achievements.

Florence’s career as the icon of the 20th. century began in tragedy when she was orphaned at the age of 12. (Her father died when she was 5, and her mother when she was only 12 years old, leaving her an orphan). Emile A. Tessin – a family friend took her in and brought her a choice of possible boarding schools, among them, was the Kingswood School for Girls in Bloomfield Hills, Michigan. The school’s headmaster was none the less the Eliel Saarinen himself (the father of Eero Saarinen). The close relationship she forged with Eliel and his family became the foundation of the design philosophy and the contacts she had later in life. On Eliel’s advice, Florence attended Cranbrook Academy for two years and then went to New York to study architecture at the Colombia University.

As World War II was breaking out in Europe, Knoll returned to the U.S and worked briefly for Walter Gropius and his protégé Marcel Breuer in Cambridge, Massachusetts. In 1940. she enrolled on a quest to complete her bachelor of architecture at the Armour Institute of Chicago (or better known as the Illinois Institute of Technology). As she later recalled studying with Ludwig Mies van der Rohe was “a year, a very valuable year.”.

Trained by Bauhaus finest, Florence Knoll embraced and practiced a philosophy of “total design.” Her multidisciplinary approach in design and architecture considered form and whole environment at every scale – from the structure of the building up to its interior, furnishing, textiles, and materials. Florence presented her designs in her pioneering method of space planning called “paste-up”.

Aiming to pursue work in architecture, Florence moved to New York City and there met Hans Knoll for whom she designed the office of Secretary of War Henry L. Stimson, and soon became Knoll’s interior specialist.

Hans Knoll sought to bring European Modernism to a new audience in the United States and was the third generation of a family who owned a manufacturing company. They began working together and little by little Florence became a significant role in the company’s aesthetic development. In 1946. the couple married and renamed the company – Knoll Associates. 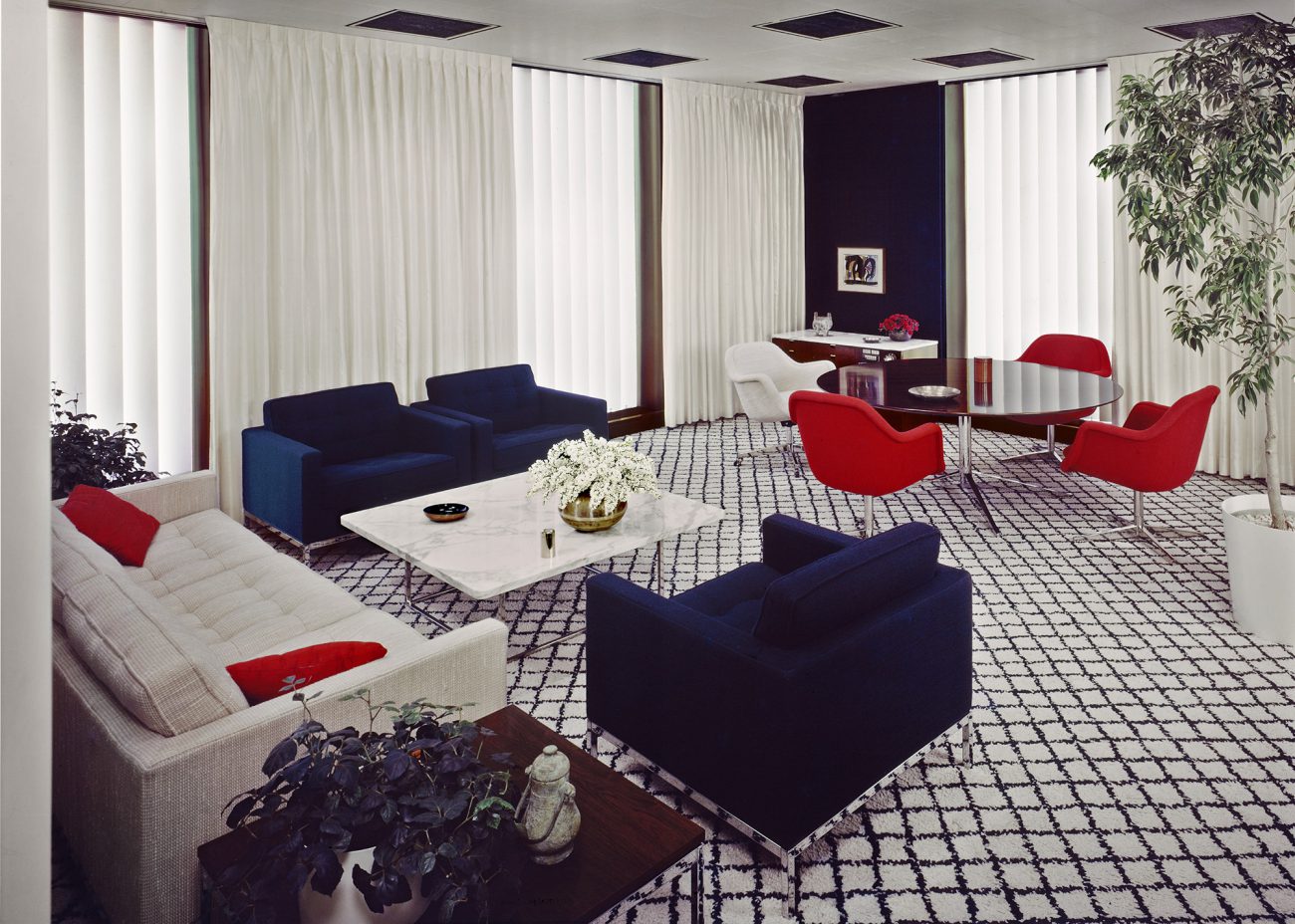 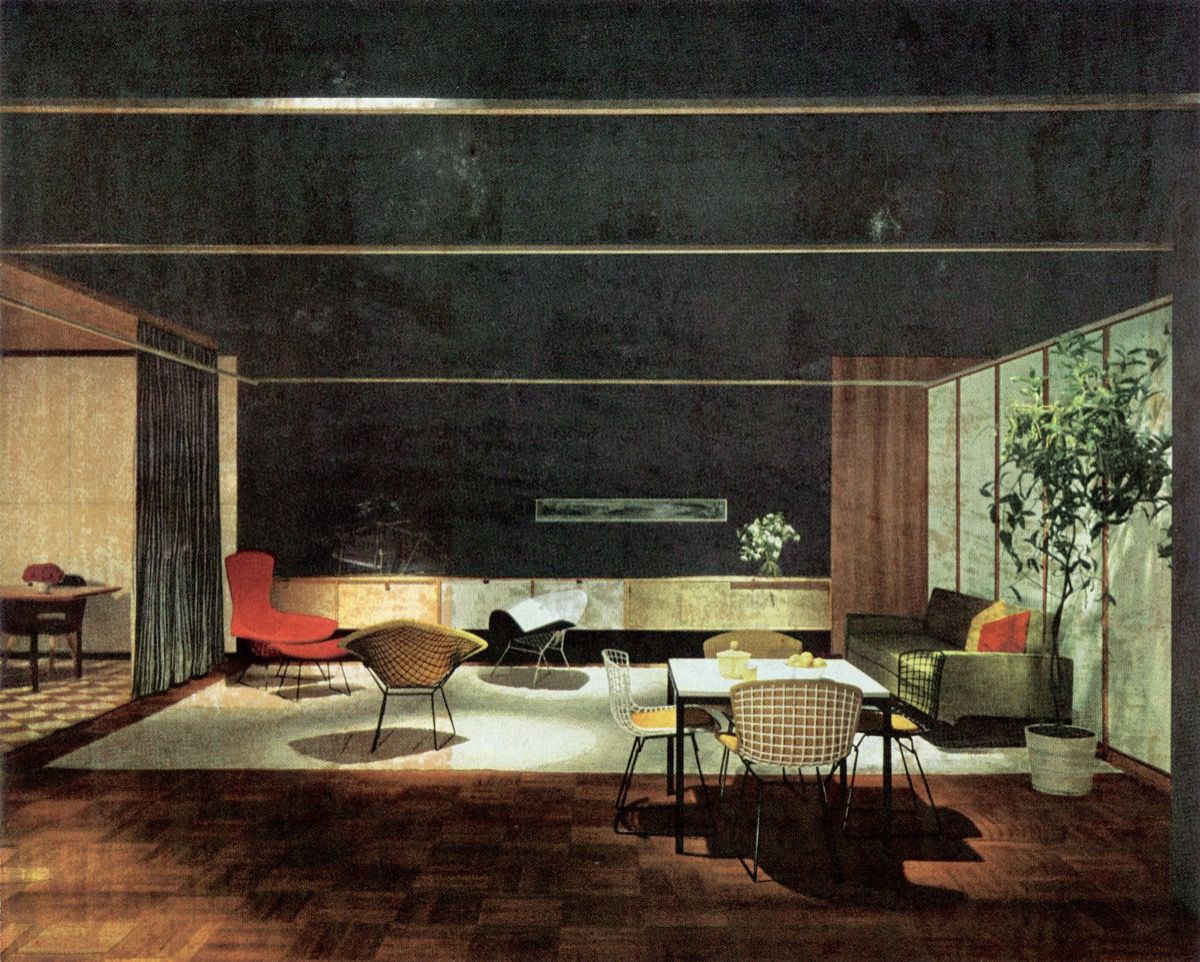 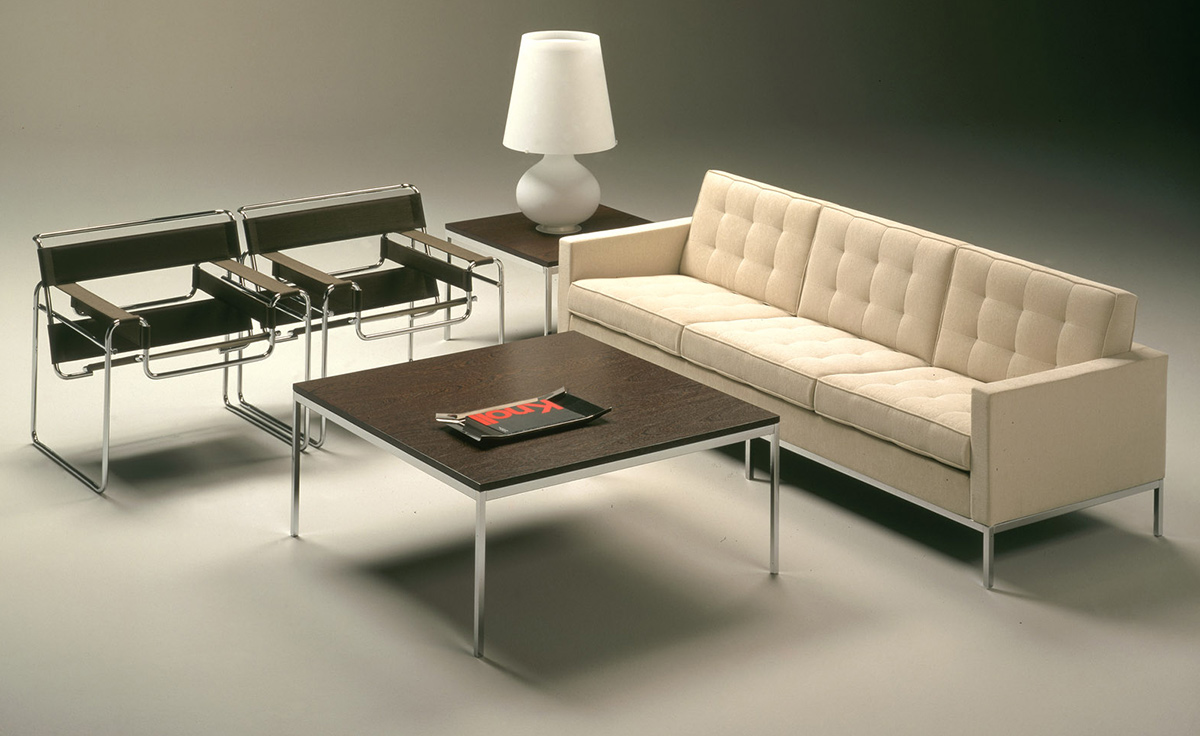 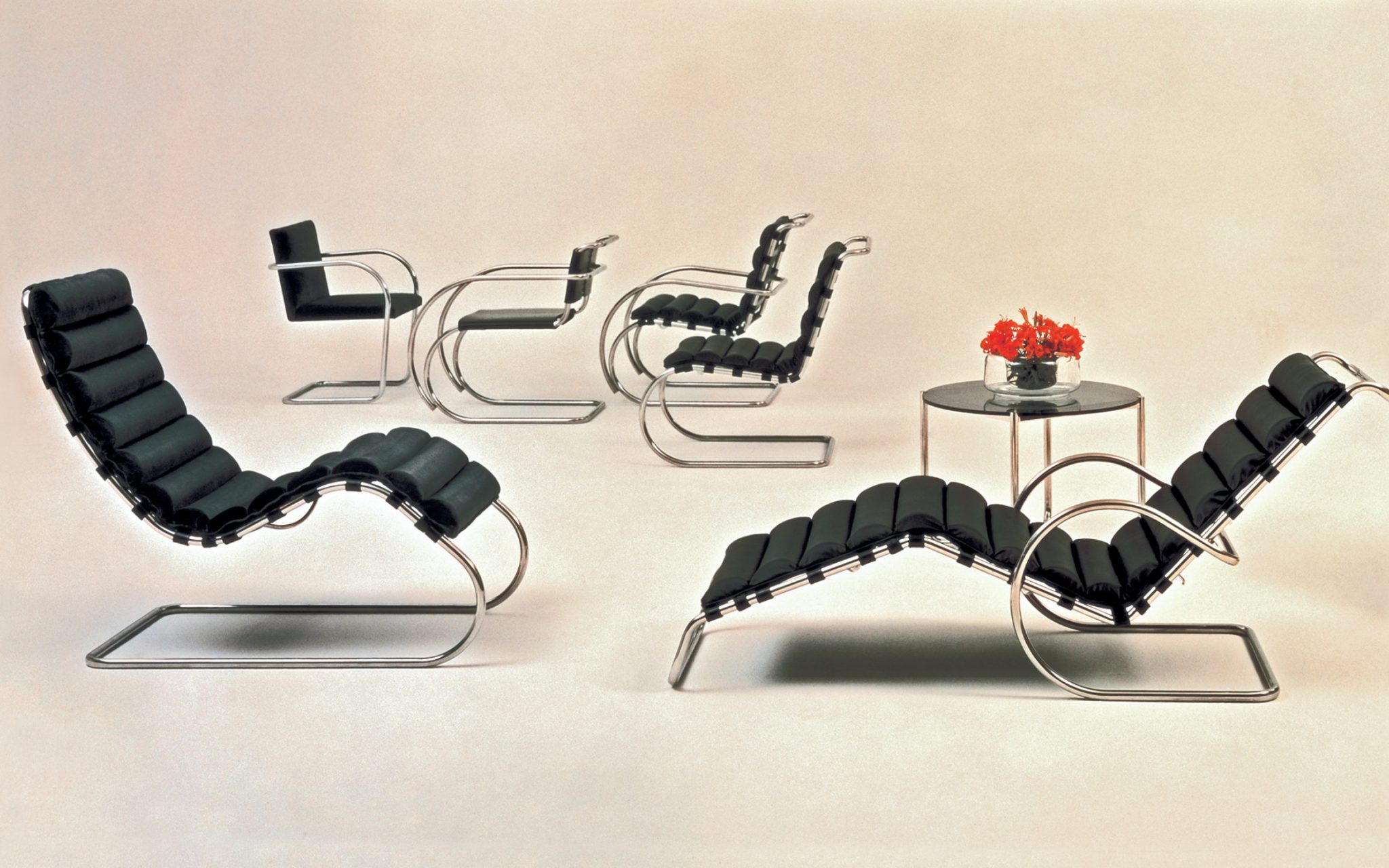 “I designed the architectural [elements] that were needed to make the room work, things like the walls, [tables] and sofas.” —Florence Knoll

Florence struggled with her team to overcome to wartime climate and the scarcity of materials, and she achieved it with clean lines and bright colors. She was also responsible for bringing architects into their firm that helped generate business in the wartime economy.

In 1945, Florence Knoll established the Knoll Planning Unit, an interior design division of the furniture company that set the standard for the mid-century modern interior. ” – Celebrating 100 Years of Florence Knoll Basset

All through the 40s and 50s, besides working with Hans Knoll, Florence designed individual pieces of furniture, guiding her aesthetic. Over the years, these seatings, tables, and case goods are proven to be design classics on their own.

In 1947. Florence Knoll decided to take a step further and address one of her concerns in the market for furniture upholstery which was later known as Knolltextiles.

It became apparent to me that suitable textiles were not available for our furniture and interiors,”

Florence used small fabric swatches that she stapled onto pieces of cardboard thus creating a display system that even now is considered to be an industry standard. She advanced so much in her work in the field of textile that she developed several signature fabrics that set the rule for the contract markets in the future.

Hans and Florence were both partners in work and life (much like Alvar and Aino Aalto, or Walter and Ise Gropius about who we wrote extensively in our Valentine’s special). They had a dog – English Sheepdog named Cartree who was beloved by many people in their private and professional circles. One can say that Cartree became a sort of mascot for Knoll Associates, and he was shown in several ads in contrast with the sleek bentwood furniture just laying on the floor. His warm and almost cartoonish presence gave a soft and sentimental side to a strong Bauhaus-embodying design.

“Cartree enchanted everyone, especially Herbert Matter, who used him in our catalogues, brochures and advertisements. He also appeared in Vogue and The New Yorker, as he happily obliged when photos were taken and he was the center of attention.”

Florence Knoll’s life was again struck with a tragedy in 1955. her husband Hans Knoll died in an accident, but despite that, she continued to run the Knoll Planning Unit and oversee all design-related aspects of the company. In 1957, her company began work with the First National Bank of Miami. Florence found love again and married the bank’s head, Harry Hood Bassett, the following year.

Florence Knoll Bassett continued to act as Knoll’s president and later as its leader of design, but eventually sold the company to Art Metal Construction Company in 1959.

Even though she retired from Knoll, Florence periodically rekindled her relationship with Knoll and one of such was her retrospective exhibition at the Philadelphia Museum. She specified the color, textiles, placement, and interior with her signature “paste-up” method of space planning for the gallery space that the museum staff referred to as the “Shu-box”.

Clean-lines and space-efficient made this traveling exhibition a testimony that more than five decades after her retirement, her approach to modern design continues to resonate with us today.