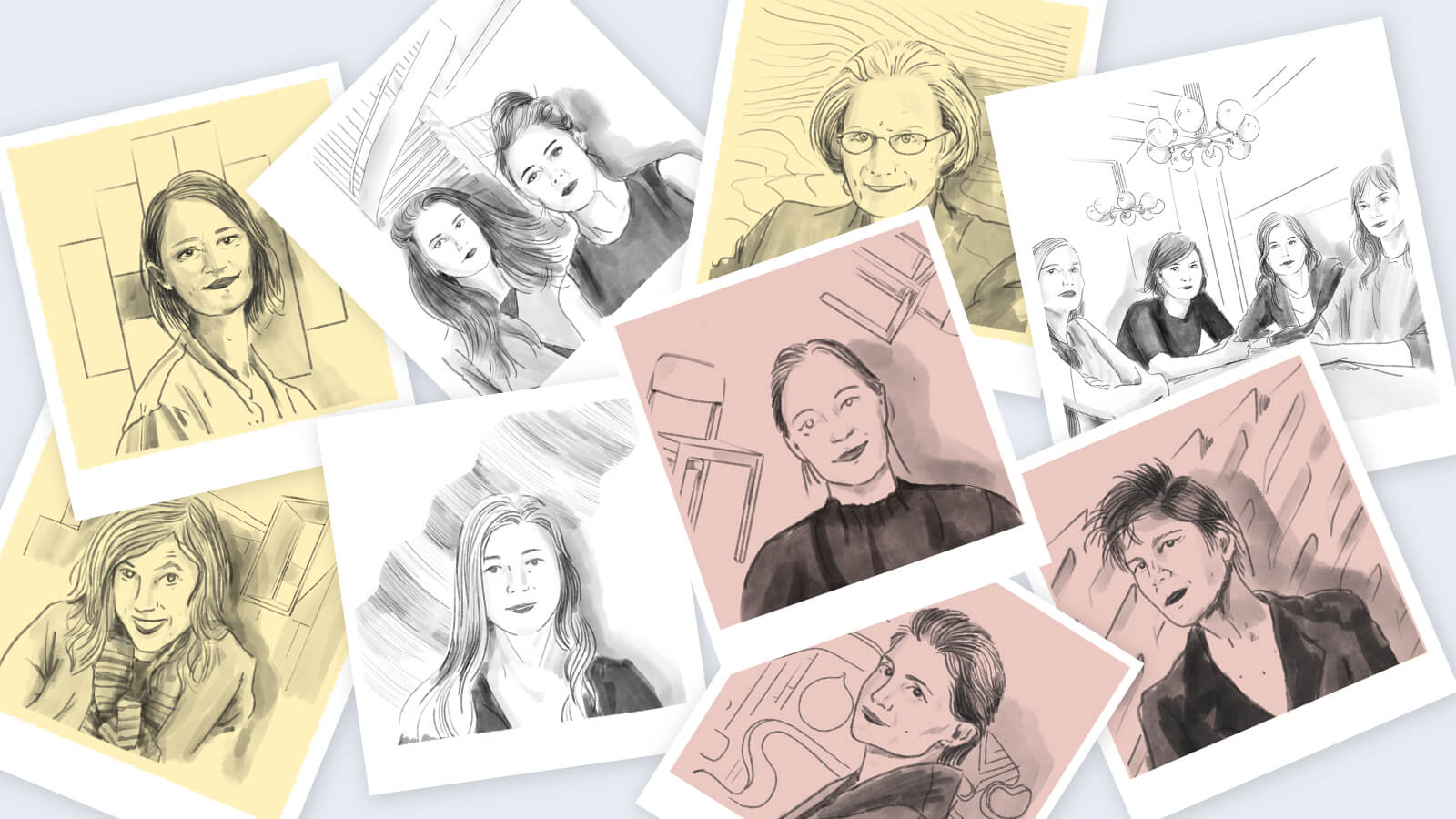 The 8th of March is celebrated around the globe as the International Women’s Day. It is a focal point in history as well as today in the movement for women’s rights.

Instead of just compiling a Gift Guide for Her, celebrating women all over the world we decided to, additionally, write a story that would celebrate Women in Architecture & Design. Last year, we focused more on historically significant women designers and architects, and this year is all about contemporary achievements.

“For many women working in and around the profession, the architecture-as building is not a central occupation… The flexibility of non-studio-based working environments and barriers to access in the building industry has meant that women, out of necessity, have been heavily influential in shaping theoretical discourse rather than construction.“ – Audrey Thomas-Hayes, Breaking Ground: Architecture by Women

“I think I am a beneficiary of the women’s movement, while I didn’t have to do the heavy lifting myself,” she admits. “I was able to fluidly start my own practice, with Ric [Scofidio], but we were definitely seen as outcasts because we were doing independent artwork.”

Diller is considered among the most influential designers of cultural spaces and in 1999 received the first MacArthur Foundation fellowship in architecture. We love that it was Elizabeth Diller who was in charge of the expansion of MoMA.

“This project has called on us to work across MoMA’s rich architectural history, incorporating the Museum’s existing building blocks into a comprehensible whole through careful and deliberate interventions into previous logics, as well as the construction of new logics that arise from MoMA’s current aspirations.

Amale Andraos is born in Beirut but has spent time living in France, Saudi Arabia, and Canada. She comes from a family of architects and has worked with  Rem Koolhaas at the Office of Metropolitan Architecture before relocating to New York City and establishing her own company WORKac with her partner and husband, Dan Wood.

The studio made its name by bringing conceptual rigor and playfully subverted typologies to practical applications. Among projects such as MoMA PS1, we believe it’s significant that Amale Andraos was appointed as dean at the Columbia Graduate School of Architecture, Planning, and Preservation which makes her also the first-ever female dean. Small revolutions happen every day, and appointing women in leadership positions means a lot for the future of the Women’s Movement.

Beverly Willis is a legendary architect and lifelong proponent for Women in Architecture’s movement. She is an American architect who played a major role in the development of many architectural concepts and practices that influenced the design of American cities and architecture. Willis’ achievements in the development of new technologies in architecture, urban planning, public policy and her leadership activities on behalf of architects are well known. Beverly was responsible for the pioneering design in digital land-use with CARLA software.

A long-time advocate for women’s inclusion, Willis has dedicated herself in recent years to change the culture for women in the building industry. In 2002, she founded the Beverly Willis Architecture Foundation, an archive aimed at shining a light on women architects who were left out of the history books.

Sandra Barclay is a Peruvian architect who graduated at the URP University (Lima) and at the Paris-Belleville School of Architecture. In 2013, she received her graduate degree in Territory and Landscape at the Universidad Diego Portales in Chile and in 2018 she was nominated Honorary Fellow of the AIA.

It’s important to mention that Peruvian architect Sandra Barclay was given the top prize, Woman Architect of the Year, which recognizes architects for a recently completed project.

“The Museo de Sitio de Paracas is a bold, ambitious project with an admirable clarity of purpose that encapsulates the determination and focus of this exceptional architect,” – Emily Booth

Barclay, who leads Lima studio Barclay & Crousse with Jean Pierre Crousse, was chosen for her work on the Museo de Sitio de Paracas, a red-pigmented archaeological museum designed to replace another almost completely destroyed by an earthquake.

Apart from Architecture, the world of Design (whether it’s industrial, furniture or interior) is blooming with talented female designers who deserve a spot in our story celebrating female architects and designers.

We’ve already talked about Cecilie Manz’s work as a designer that is shaping the world around us. You can read more thoroughly about her achievements in this story.

It’s important to mention that Cecilie Manz’s work within furniture, glass, lighting, and ceramics has received international acclaim and is sold and exhibited all over the world. She is educated from The Royal Danish Academy of Fine Arts with additional studies at the University of Art and Design in Helsinki.

“I design things that have meaning to me. My general objective is to always have a clear argument that legitimizes the designs that I make. Function is essential and if I cannot formulate a good reason for a new product to exist, it is better to refrain from making it.”

Margrethe Odgaard’s name and work is a synonym for textiles in a contemporary context. Working as a designer for Kvadrat, Muuto, and other renowned Scandinavian brands, Margrethe Odgaard is part of the new generation of textile designers in Denmark.

After graduating from the Royal Danish Academy of Fine Arts in 2005, she worked as a textile designer in Philadelphia, and later in Paris, before setting up a design studio in Copenhagen in 2013.

“By casting new light on the possibilities of material, the pieces will evoke broader conversations about the circular economy and the potential of sustainable design to change the way we think about resources,” – Kvadrat

Studio AUTORI (Dijana Novaković and Maja Necić). The work of the studio involves different projects from the fields of architecture, interior design, and furniture design. AUTORI is a younger generation of architects and currently one of the most sought after studios.

They carried out the design of numerous interiors for renowned Belgrade nightclubs, business and commercial spaces, coffee-shops. Their creations are present in all relevant architectural and designer publications. Studio AUTORI is responsible for the interior design of the GIR Store and our cafe opening soon!

Studio Fluid is an architectural design studio from Belgrade. Founded in 2015 by Nevena Pivić, Vanja Otašević, Zorana Vasić, and Tijana Vitomir, the studio is a natural continuation of the long-lasting teamwork within the Fluid Arhitektura studio of the architect Đorđe Gec (1965-2014).

As a multidisciplinary studio, they work in exterior and interior design in the areas of residential and commercial architecture.

Our architecture is based on the creative consolidation of the inputs we get from the future users of space and our sensibility and aesthetics. We set each new project as a new challenge, while innovation is a constant we use for the optimum space enhancement. We pay equal attention to the design of architectural structures and the miniature interior details. Apart from the fact that our style is recognisable, each new project is different and unique thanks to the creative exchange with our clients, whose satisfaction we find as important as respecting the highest architectural standards.

Through a ritual dedication to the process of creating, in the latest period of her work she is exploring feelings, vibrations, natural occurrences and phenomena through which the human mind and body are reflected with the goal of finding possible, often abstract solutions for its own state of being.

Emilija uses her artistic curiosity as a starting point for showing us her inscapes, as well as advancing into the world of three-dimensional drawings and spatial installations. By now she has had solo and group exhibitions, audio-visual performances, collaborations and publications with different artists, curators, institutions, and galleries.

Emilija founded ETAR studio with artist Mario Kolarić in 2019. and for GIR they have created a range of products.