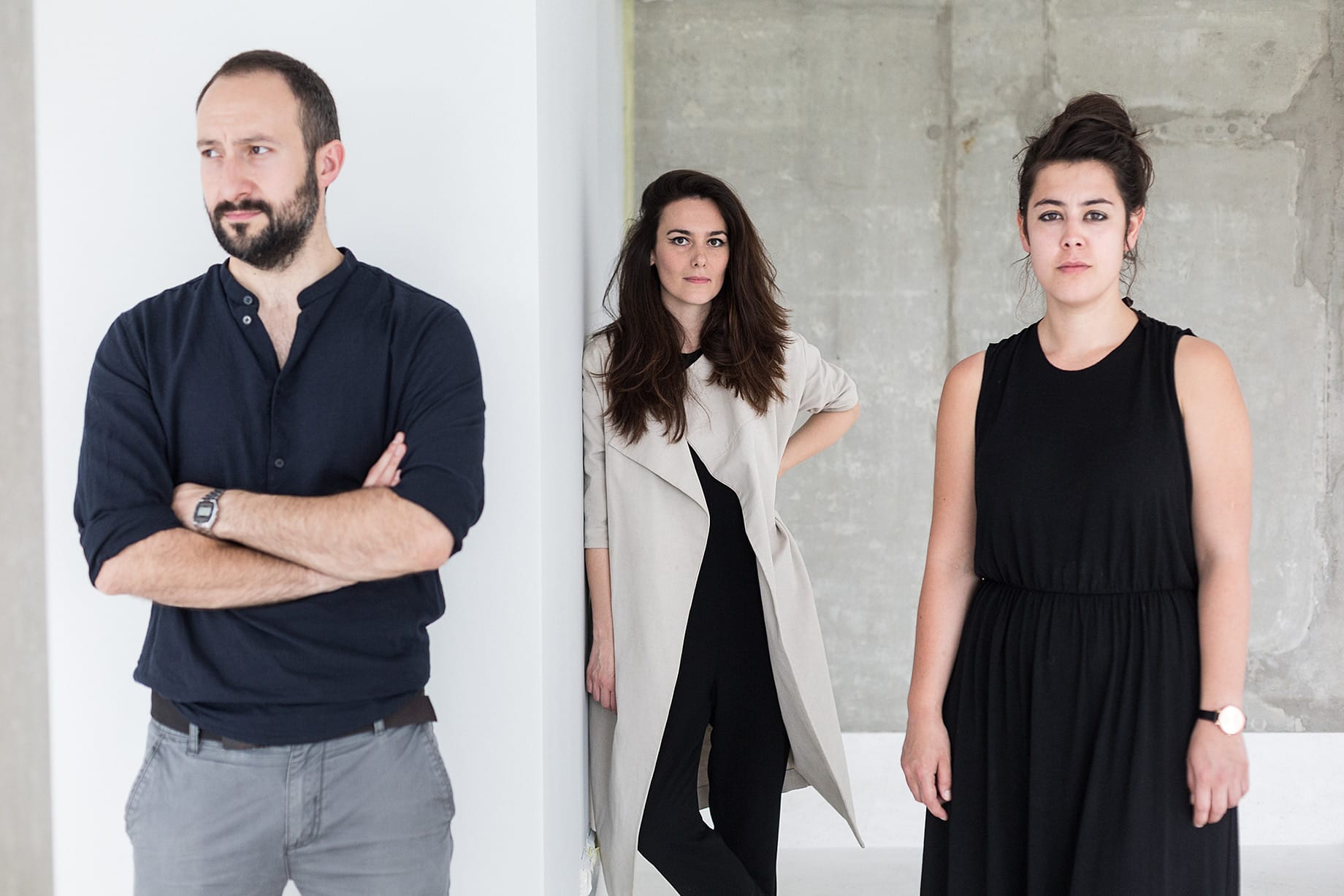 “To see that many people gathered around one idea is marvellous”

At the end of 2015, in search of architects who will work on the interior design project for GIR Store, GIR recognized studio AUTORI as the brightest phenomenon in the local architectural scene in the last decade.

The studio which was formed by Dijana Novaković, Maja Trbović and Dušan Nenadović, has been building structures crowned with “Ranko Radović”, Salon of Architecture and other awards for seven years. Besides that, studio AUTORI was nominated for the Mies Van Der Rohe award twice.

Studio AUTORI was invited to provide the solution for GIR Store interior to which they respond with an airy and sensual project. They merged three spaces into one and filled it with GIR related brands, curtains as ambiental dividers, one swing and countless details for which this studio is known. A part of this space that got special attention from the architects is the Experience Point. It will be a feature which will distinguish GIR Store from other furniture stores.

We find out more about the ideas behind the GIR Store interior design project in conversation with Dijana, Maja and Dušan.

G: All three of you are architects so our guess is that you’ve encountered wood as a topic and building material while studying. How would you describe your relation to wood before GIR? Have you had the chance to build with this material before?

A: Our first mini project, the „1878“ bench, was made of wooden baulks that once held a house in Mokrin on the very space where House B, another project of ours, is now. We haven’t had the chance to design and build an architectural piece entirely of wood so far. The idea is very appealing to us and so is the knowledge we would have to gain in order to make it happen. You aren’t introduced to wood as a traditional building material at the Faculty but through a series of endeavours you have to overcome in order to get your chances for designing as soon as possible.

G: You were introduced to GIR’s capacities and formed your first ideas which will later be incorporated into GIR Store project based on your factory visit. What is it you saw in the factory which you took with you??

A: We have designed several custom pieces of furniture for GIR Store which were directly influenced by the details we saw at the factory and the apparatus which factory workers use. To see that many people gathered around one idea is marvellous! The atmosphere at GIR Kraljevo reminds us how much work it takes to make something which will eventually gain tags like „good“ or „quality“. It’s nice to meet other people who think alike and who you easily agree with when something is not good for example. We translated our experiences from the factory to a part of GIR Store we call the „Experience Point“. It’s a place where visitors can see wood in various shapes and phases and all other values which GIR nourishes. The visitors should understand the furniture they buy and the process that wood has to go through till it makes it into the hands of customers even more after such and experience. The Experience Point is a surrogate to nature and a transformable space in which giant curtains, plants and mobile platforms dominate. We have dedicated special attention to introducing buyers to details and surface treatment of wood.

“For this particular interior we also had in mind the amount of design that will come and go through it so we wanted to make a perfect filing cabinet for all the thoughts by merging the three spaces into one.”

A: If you read the GIR Store interior as a base for presenting design you’ll notice that we kept the pallette neutral but magnificently neutral. It is very demanding to point to the right grey out of all the greys and stick to your decision after a week. Terazzo is one of our favorite choices when it comes to flooring and we believe it can play its role the best in spaces of high frequency. It was very interesting to arrange an already prepared furniture catalogue. Ethnicraft and Universo Positivo are brands which are capable of suggesting their surroundings but also let you use them as a chalkboard. We added some world-renowned brands, but also pieces of talented local designers such as Miljana Nikolić and Stefan Đurović which will show what GIR is after for its own furniture collection that we’re eagerly expecting. For this particular interior we also had in mind the amount of design that will come and go through it so we wanted to make a perfect filing cabinet for all the thoughts by merging the three spaces into one. Also, we can cross „design spiral staircase“ off our bucket lists now. 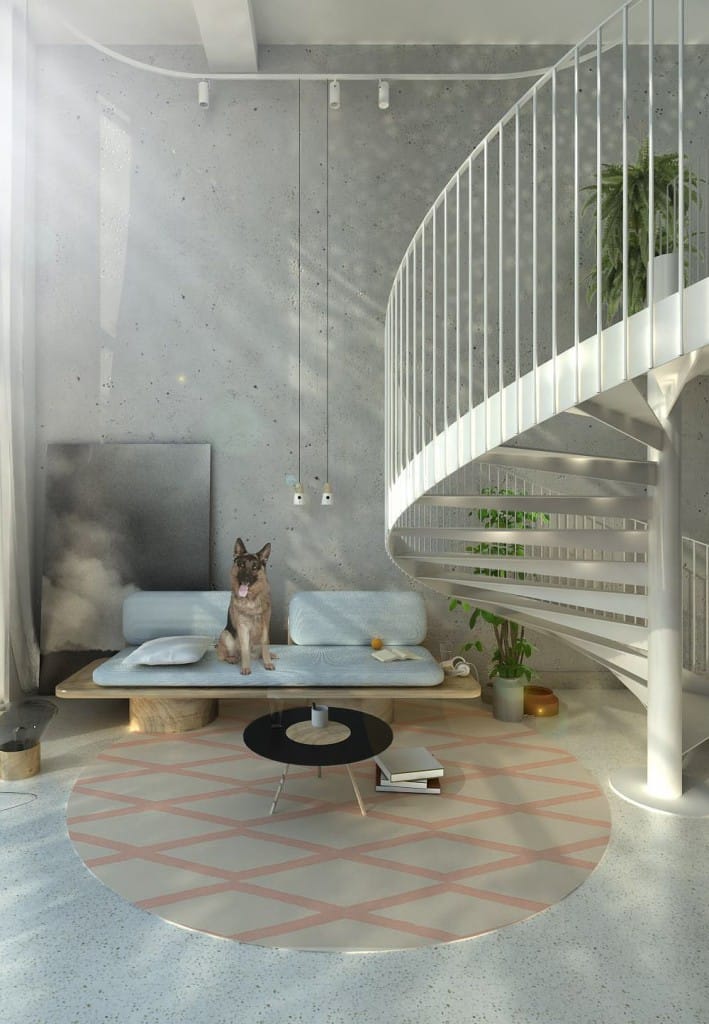 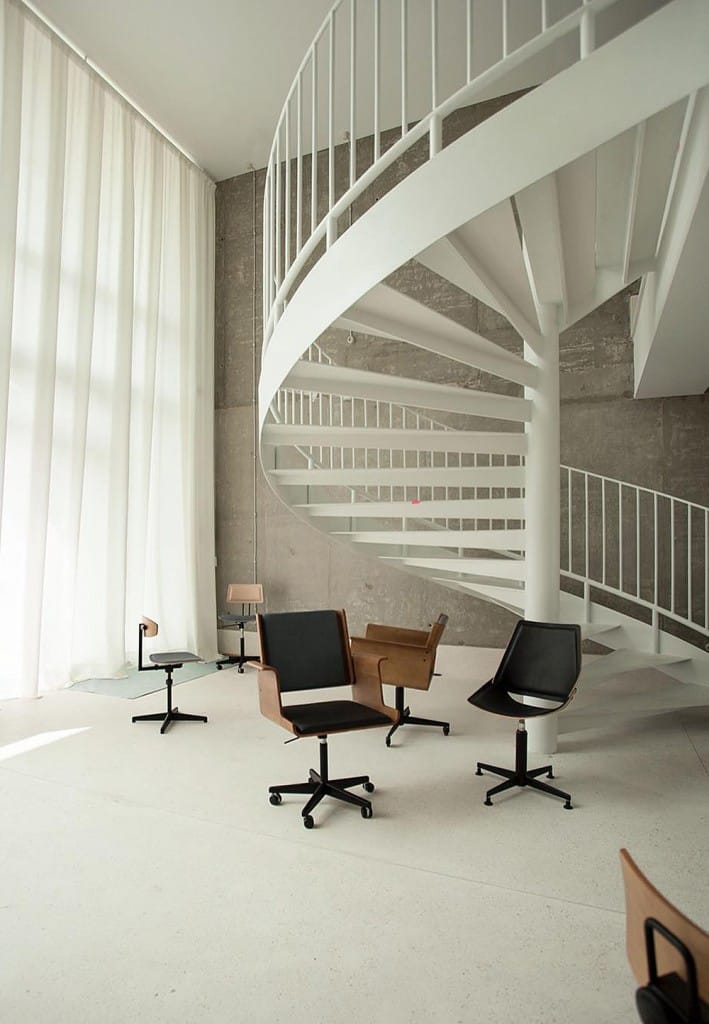 G: You are working with GIR for the first time and you have an entire factory at your service. How did you use that? We see many mini projects and product designs you delivered specially for this Store.

A: We have learned a lot from GIR’s development team in Kraljevo. You make all the corrections and decision easier when you know that you have so many engineers by your side looking at the same goal as you are, and that is to respect the initial ideas as much as possible. It is our first time to work with such a well-coordinated team when it comes to surface treatment. We aren’t going to elaborate on particular pieces cause there are so many. Shelves, pults, seating… All on many many wheels. Soon at www.autori.rs.

G: How do you see the future of this space, living and working in it?

A: Belgrade already knows how to do that, that sort of gatherings and seducing different types of people with many interests by serving interesting programme. It will be interesting to see a „design shelter“ as you call it, in New Belgrade. That will be something new! In the very eye of Serbian business. Our guess is that the gentle and tamed crew you put together will be ready to master new languages and serve quality programme, something that several of your team members know how to do very well already.

G: We are compiling music which local DJs and musicians send us specially for GIR Store recently. Which song would you like to hear when you enter a furniture store?

A: Here’s a song of a band with more than an adequate name: