Known for its meticulous approach, GIR has been a recognized furniture manufacturer for years, and it recently presented itself as an initiator of an original collection that is rich in the assortment of pieces made of wood.

During this year’s Furniture Fair, we spoke with Bojan Radović, an originator and a creator of ideas behind the GIR Company, about dedicated work, deep thoughtfulness and a long-lasting collaboration between various authors that make for the GIR’s first furniture collection. The first time we met, a little less than year ago, Bojan shared with us the foundations on which GIR arose and the principles by which it is governed, and now we look upon solely on the new and fresh collection made out of ash wood which is currently presented at the Fair – as a project, a direction in which they plan to go and as a certain crossroad. GIR travels a long way from a high-end manufacturer towards a dynamic and sustainable brand, and the proof of its development is the ФОРМА – FORMA exhibition, with which they turned a selling space into an exhibition space which is dedicated to the promotion of young visual artists

BA: GIR is a name that represents a commitment to design of the highest-quality wood, and until now you have been manufacturing for other brands of similar ideas. When did the idea of forming a special and unique brand by the same name – GIR, come up?

B.R.: Since the beginning of the GIR’s story, the thing that inspired us the most is the undying need for creating new values, supported with the love for materials, directed by the deep respectfulness towards the design and beauty. From that state of mind, almost two years ago we started the research and cooperation with various domestic and regional designers-authors. The results of that work in different forms have been shown to be very potent and encouraging, and motivated us to make new steps. The collection that has now seen the light of day after two years of enjoying in the work is the result of that fruitful fusion.

BA: The current GIR brand consists of which parts (which pieces, authors, etc.)?

B.R.: It consists of everything (laugh). Just kidding, for now, there are some “standard” but non-standard elements of interior which are needed in every home. The authors mainly come from Serbia and Croatia, and one design studio is from Spain. 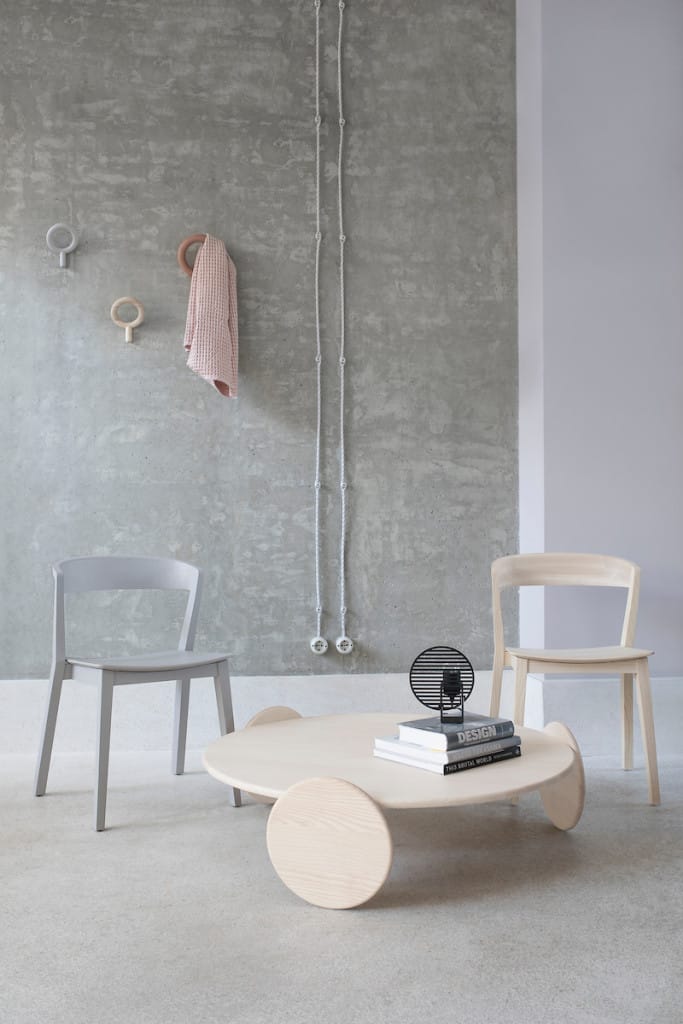 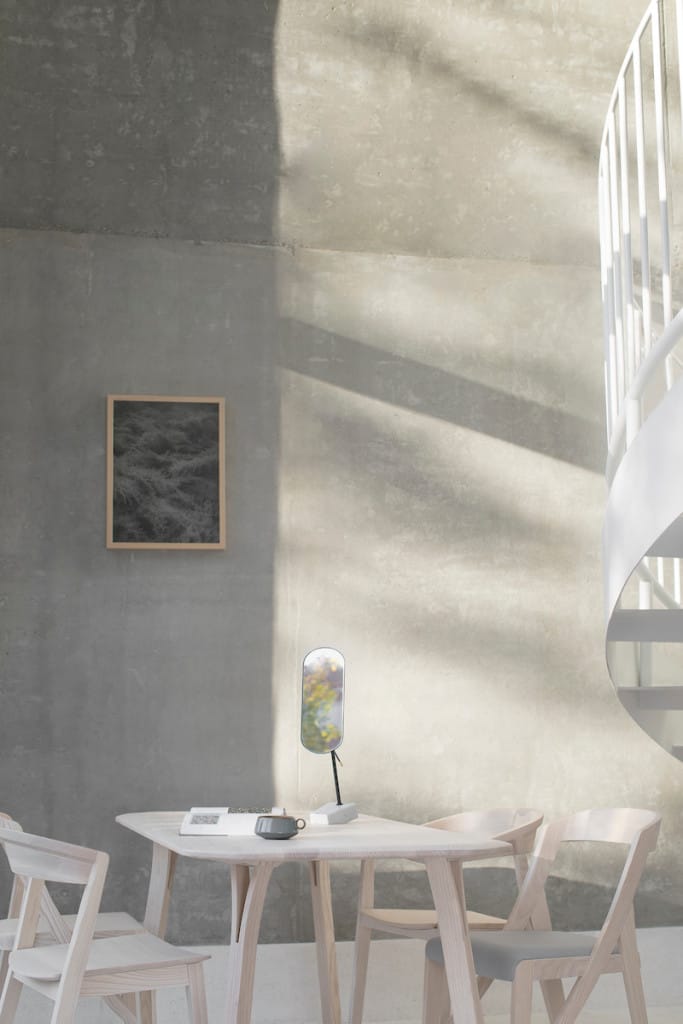 BA: What guided you to form the brand: texture, form, some particular influence? What is that which encompasses all of these pieces?

B.R.: A big part of motivation is in the Balkan’s heritage, while the task for the form is to be pure, progressive and typically have one lucid, but coherent detail which is also the core of the philosophy of design of that particular piece. Not traditional, but a new approach to heritage. Marko Oljača’s pieces are, for example, inspired by Djavolja Varoš, and watermill wheel; Klin table of the Numen/For Use studio by hayforks; the coffee table of the Chudes studio by trifora window; the lamp of the Presek studio by a cooking pot etc. But that was just one of the briefs, not a strict condition needed for that piece to be a part of the collection. The most important things for us are the originality of the idea and a mature, coherent, logically based realization of that idea. Out of wood, our basic material, we wanted to get a rich structure, a refined living texture, ethereality, cleanliness, “easiness” and neutrality at the same time, which was not an easy task. After a long period of work and research we came to a conclusion that we  can get all that by using ash wood with a very careful selection, thoughtful pairing and in the combination with purposefully made materials to treat the surface. Also, one of the elements of the collection is the use of colors, colored wood. We did some wood painting.

The most important things for us are the originality of the idea and a mature, coherent, logically based realization of that idea.

Out of wood, our basic material, we wanted to get a rich structure, a refined living texture, ethereality, cleanliness, “easiness” and neutrality at the same time, which was not an easy task. After a long period of work and research we came to a conclusion that we  can get all that by using ash wood with a very careful selection, thoughtful pairing and in the combination with purposefully made materials to treat the surface. Also, one of the elements of the collection is the use of colors, colored wood. We did some wood painting (laugh). 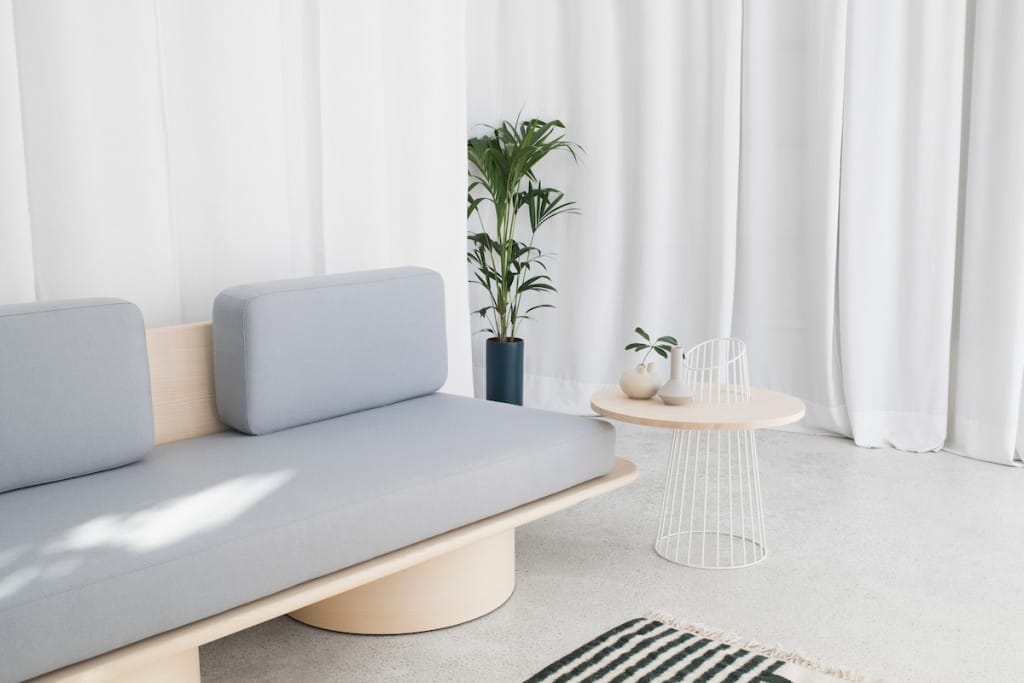 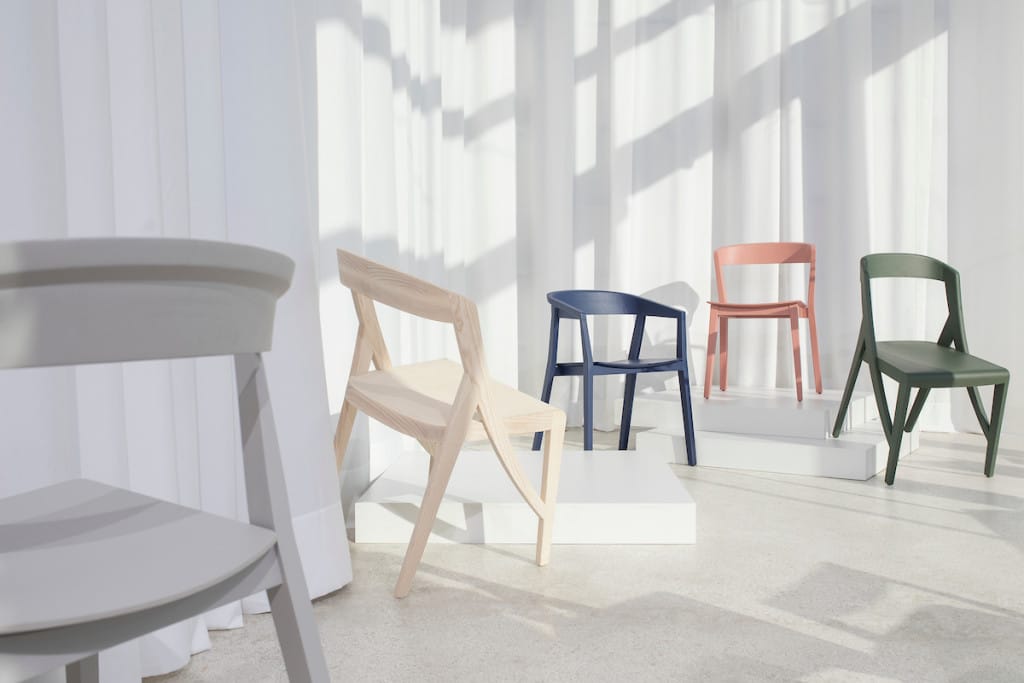 BA: How did you choose your co-workers/designers who participated in creating this collection and have you worked with any of them before?

B.R.: The selection happened in a natural and spontaneous way. Very similar taste, the drive to create, orientation towards design and clear criteria are the tightly binding factors between us and our associates. With some of them we had worked before, with some we have just started a long-lasting and beautiful collaboration, and we will certainly find more wonderful people who are ready to join us in creating beautiful things and new values.

BA: How is your approach to creation different when it comes to your furniture, where is your presence starting with the idea, across the design, to realization?

B.R.: Presence is absolute in this instance. The whole process starting from the original thought up until the finished product is much longer, with more layers and complexities than one might imagine. Just for one product, it is necessary to make dozens of small and big decisions until we get to a satisfying outcome. There are also a number of cases in which we return a few steps back, and sometimes even at the very beginning, because it needs serious re-conceptualization in order to overcome the problem we encountered during the process of realization. A certain amount of determination and commitment is needed for one piece to be fully completed. Fortunately, we are not lacking in that qualities (laugh). 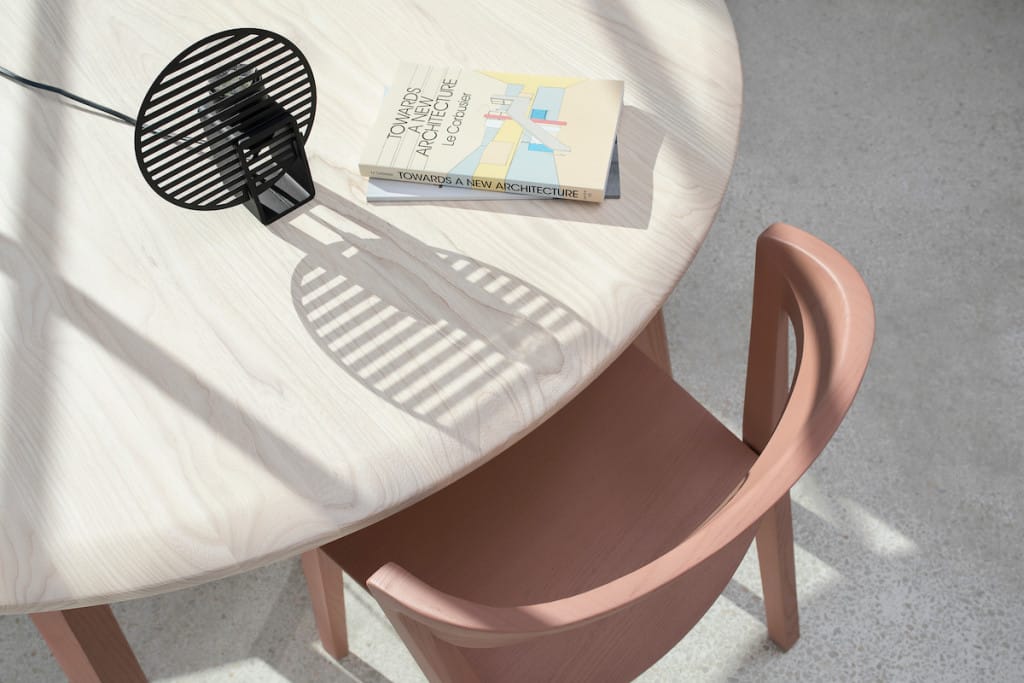 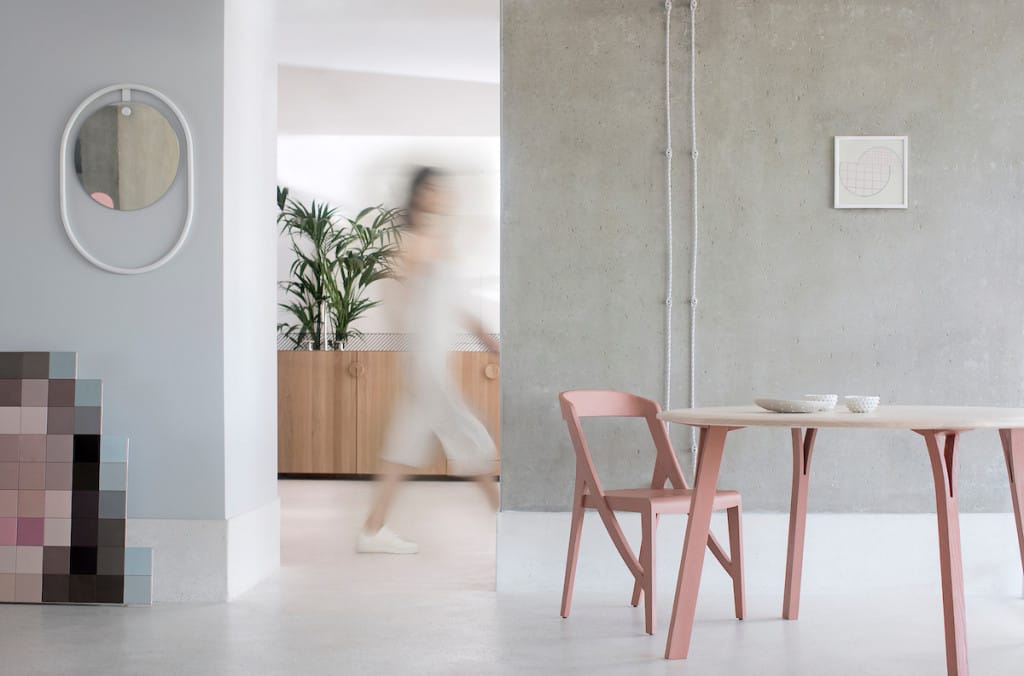 BA: How long does it take for one piece to be completed and which is the most complex part of this process?

B.R.: If we are talking about development and if we are fully clear about the ways in which the piece will be realized, it can be matter of just a couple of days, but at the same time, it can be a few years from the starting idea to the realization. The thing that most affects the duration of the process is the number of tasks that need to be solved, and also whether or not we dealt with those problems before. Sometimes it really takes a lot of brainstorming to solve some of the tasks that have been set by the design, and sometimes it’s necessary to conquer new technologies and knowledge to succeed in that. That is a special kind of enjoyment; the learning through the process and the “raising of the bar”.

BA: What is the most important thing which the modern furniture manufacturer has to take care of and which compromises do you most often have to make?

B.R.: I think that the compromises are a matter of choice. I’m not saying all the compromises are bad, but in most cases it is just choosing a shortcut that won’t take to the desired results anyway. A compromise will never get to be “iconic product”. For a contemporary furniture manufacturer, it is crucial to have a clear view into the “broader picture”. You need to follow and have knowledge of the fields of technologies, materials, organization, economy and design in order to be in a good direction.

The world has never been a more competitive place, and it has never before been ready to accept and recognize “the real thing”.

BA: Was there a piece of furniture that has been a special challenge? And why?

B.R.: The whole collection has certain complexities in the process of production which we intended to impose with the design. It’s a lot harder to replicate these kinds of products, which also, of course, add to their value. I think that for almost any product we could anticipate the difficulties which we encountered with the particular piece and the way with which we solved them. We have also the chairs, one of the most complex challenges in regards to both design and the production, especially the Brida and Woodlock, that require programming and processing by the highly modern multiaxis CNC machines, but also the hours of handwork. As one of the challenges we had never encountered before, we could name the Klin table of the Numen/For Use studio; especially the upper element of the legs. It was necessary to apply a controlled deformation in order to bend the split pieces of wood outwards which then had to be put in a desired position with the transversal prop – Hayforks (laugh).

BA: Brands with which you collaborated before are mainly foreign. To which market does the GIR brand speak to and how important is that aspect in the furniture business?

B.R.: GIR principally addresses the market of the GIR Store. The market can be relevant, but we feel that the most important thing is to follow the idea you think it’s universally right, which has an enormous quality and beauty.