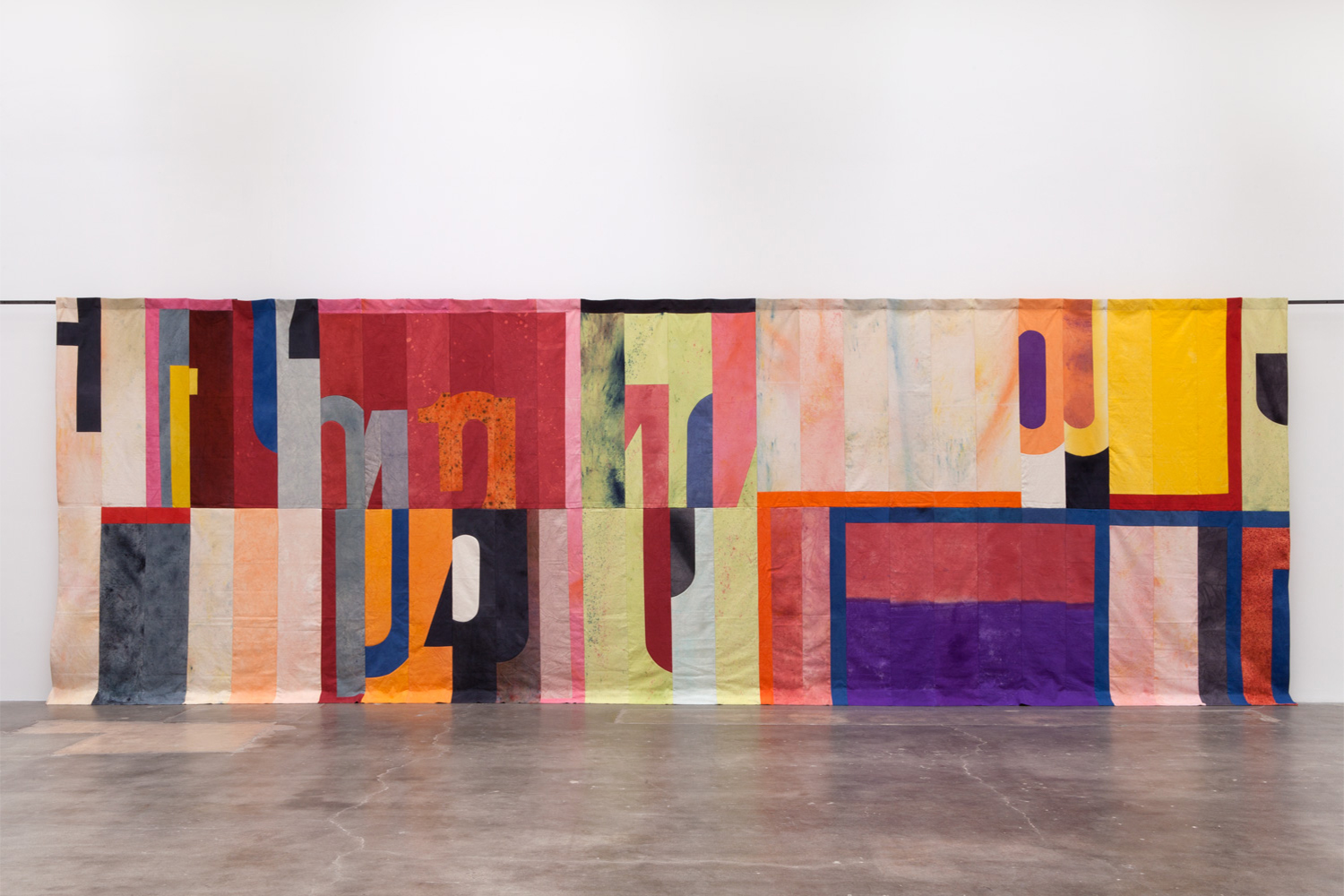 Along with cave paintings, the thread and tapestry are one of the oldest human-made creations made to transmit meaning. In 1965, Anni Albers wrote her canonical essay “On Weaving” analyzing the thread and dedicated it to the great teachers/weavers of ancient Peru.

The basic principle of weaving a tapestry (usually placed on the wall) is defined by complicated pictorial designs formed by warp-and weft, or embroidery and has not changed for millennia despite the industrial revolution and the technology of the 21st century.

We’ve talked about the fascinating world of textiles before and mentioned Kvadrat as a company that is pushing the boundaries of textiles. Today’s story focus is on weaving as an artistic medium. In one of our exhibitions “New Perspectives / Artist Studio” we invited Emilija Radojičić, a contemporary artist to show us her creative process of weaving using traditional techniques.

Despite the technology we now have, contemporary artists dared to take up the painstaking labor of weaving, and found themselves in a dialogue with modernist textile artists such as Anni Albers, Gunta Stolzl, Otti Berger etc. – that were instrumental in elevating the status of weaving as a fine art and not just crafts or decorative accessories.

To fully understand weaving as art practice it’s important to acknowledge its history and its purpose. Tapestry has been used for practical, decorative, expressive and even spiritual purpose. From medieval times we can take as an example the famous tapestry “Lady with a Unicorn” whose cryptic symbolism surpassed its practical purpose to keep the draft out of European castles. Another good example is the highly developed textile culture of ancient Peru that emerged in the absence of written language. In the Middle East, tapestries had spiritual, magical properties (just think of Aladdin and his flying carpet).

Until the 20th century weaving was looked at as a craft, but with the Bauhaus textile workshop and female artists such as above mentioned Albers, Stolzl, Berger and many more, the concept of weaving tore down the distinction between art and craft. In the 60s it was finally embraced as an equal art medium displayed in art galleries worldwide. 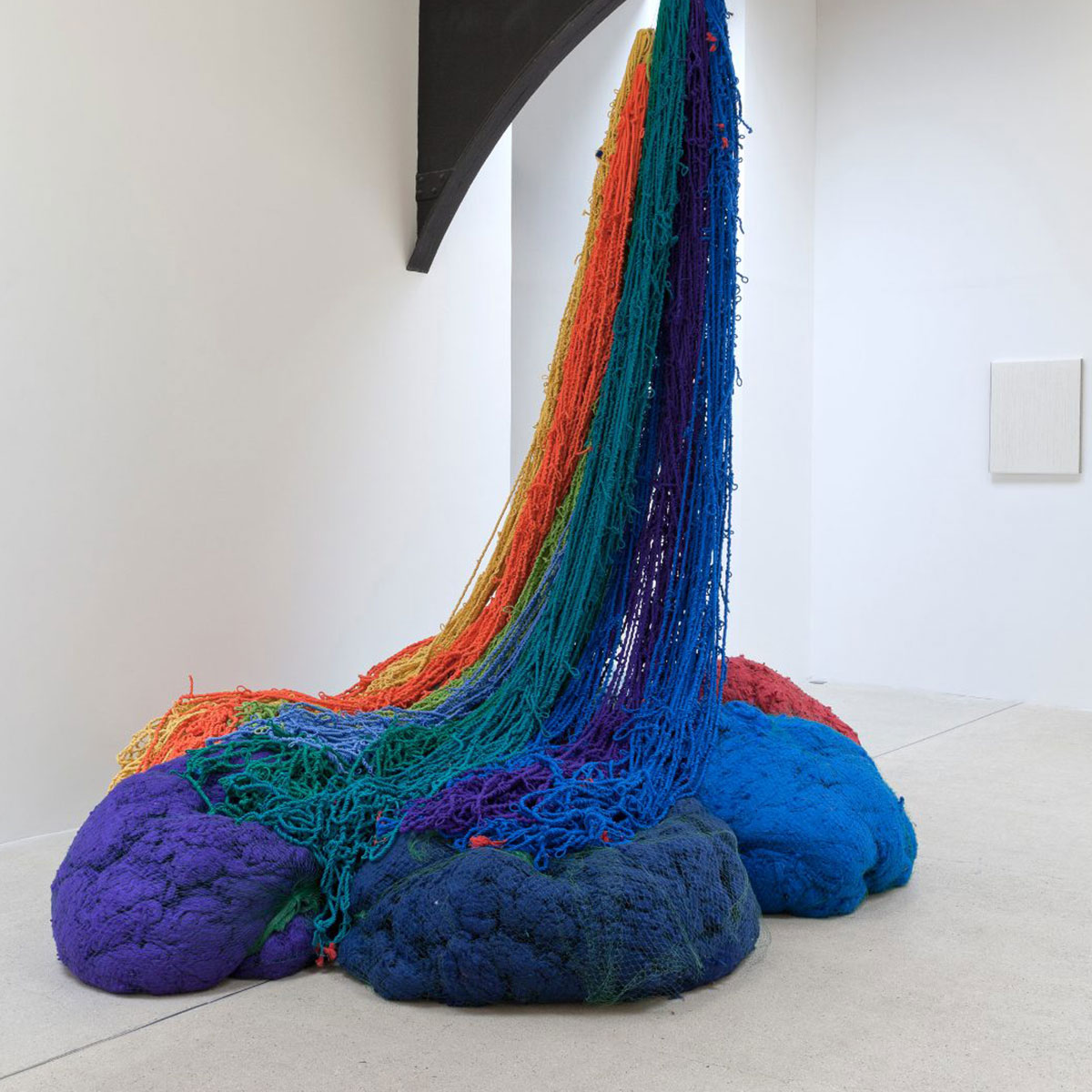 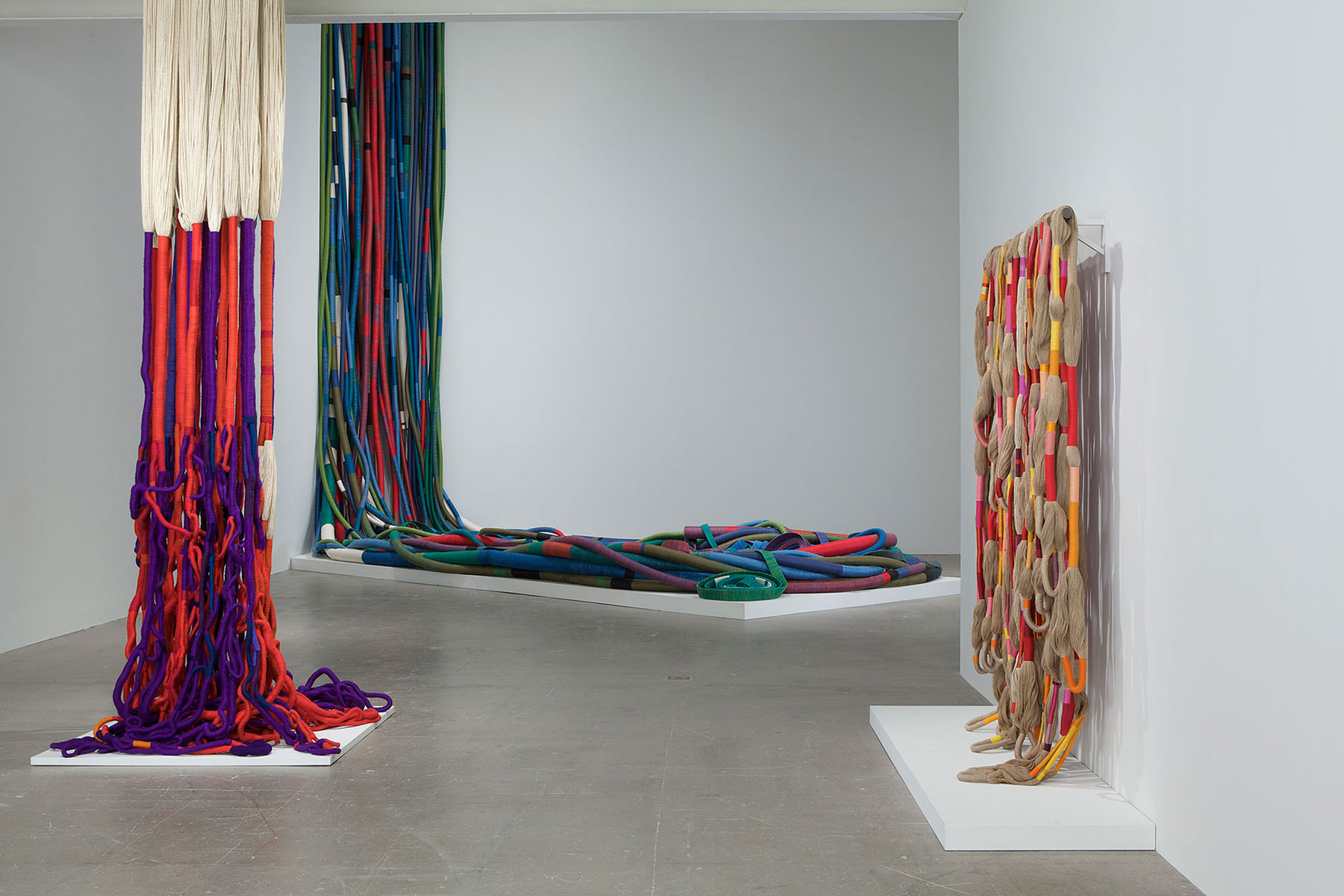 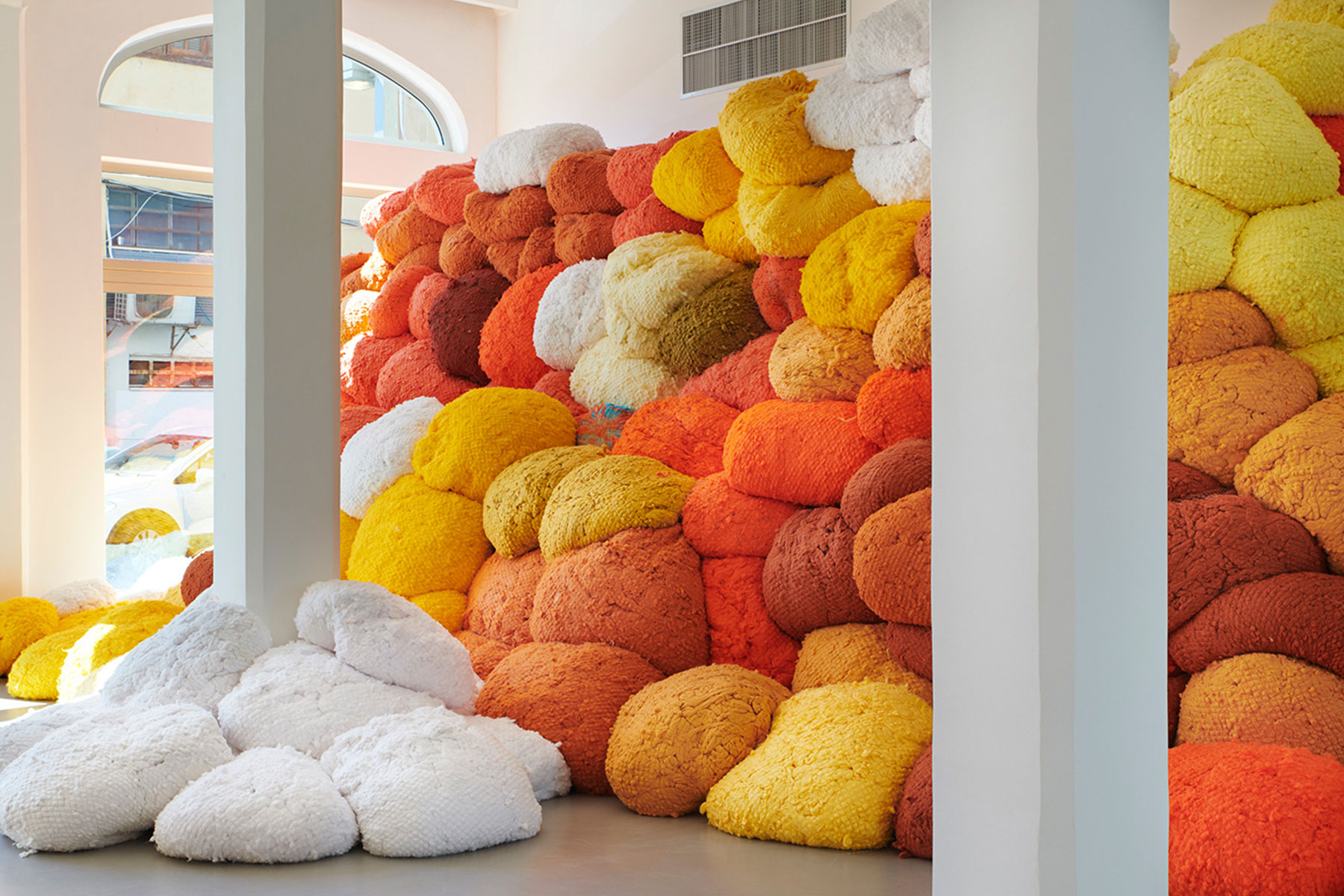 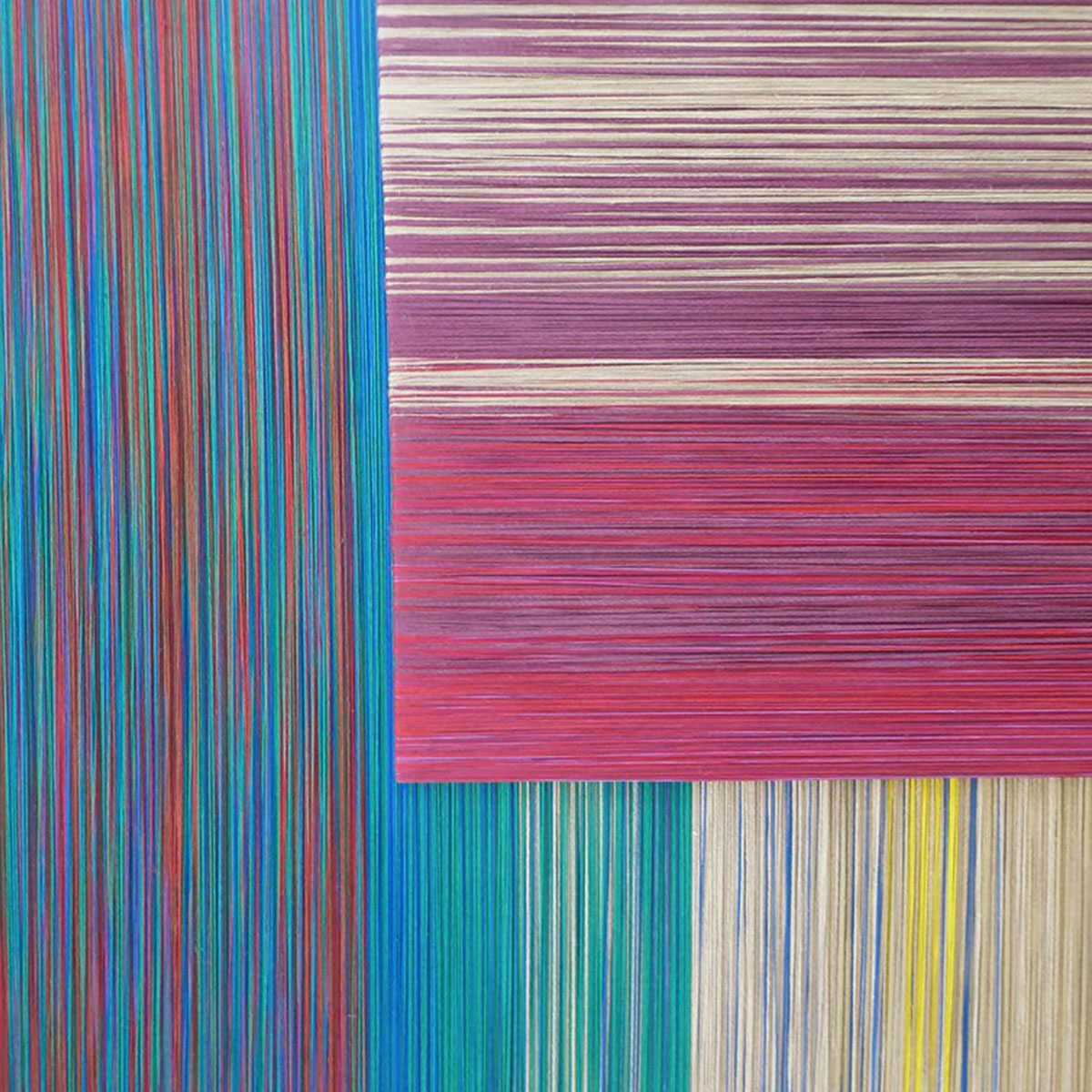 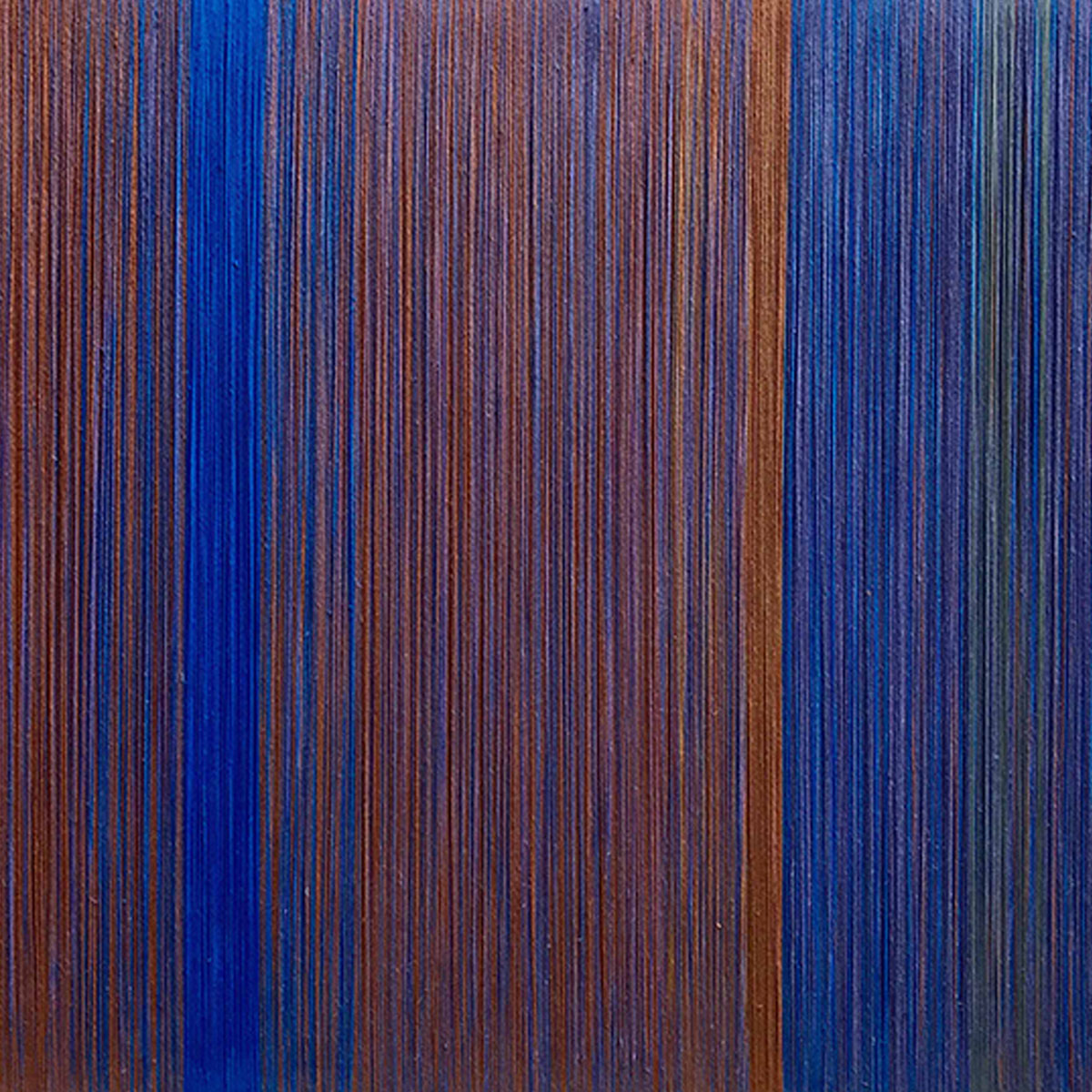 Nowadays, contemporary textile artists have found a way to use tapestry to explore identity, sexuality, even politics and harsh realities of our world. We’ve compiled a list of artists that continued to push the boundaries and reception of textiles, from pioneering figures to emerging artists.

Sheila Hicks is one of the key figures when talking about pushing the boundaries of textiles. Having worked in a still borderline accepted medium of fiber art in the late 1950s, Hicks created works that showed what can be done with a material that has long been perceived as craftwork closer to interior design and fashion, rather than an avant-garde sculpture.

Working in her field of work for decades, Sheila Hicks tested the limits with weavings, anti-form gravitational hangings of wool thread, organic bundles of linen, fabric-wrapped panels and even handmade rugs stacked in a configuration that allows for further interpretation of the form. Her formalism led her towards abstraction, even though the public is always aware of the material. 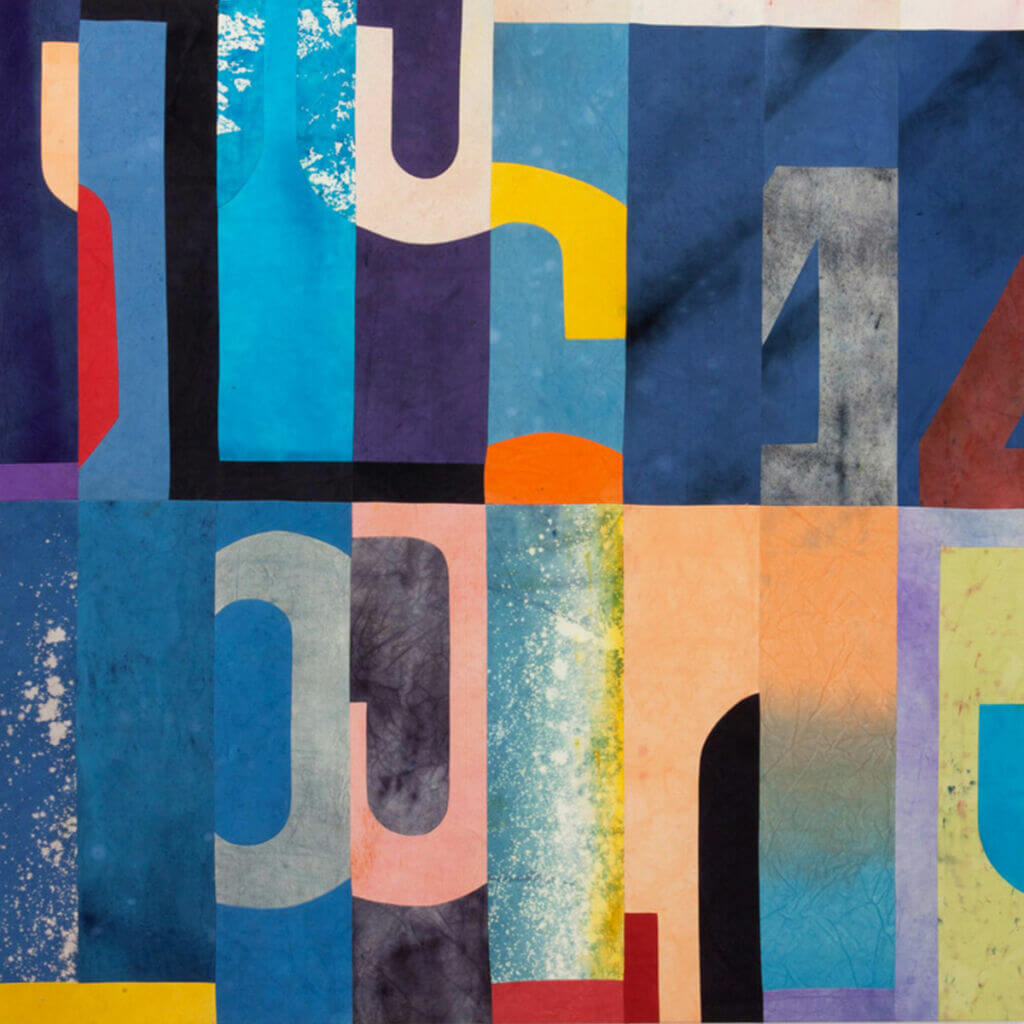 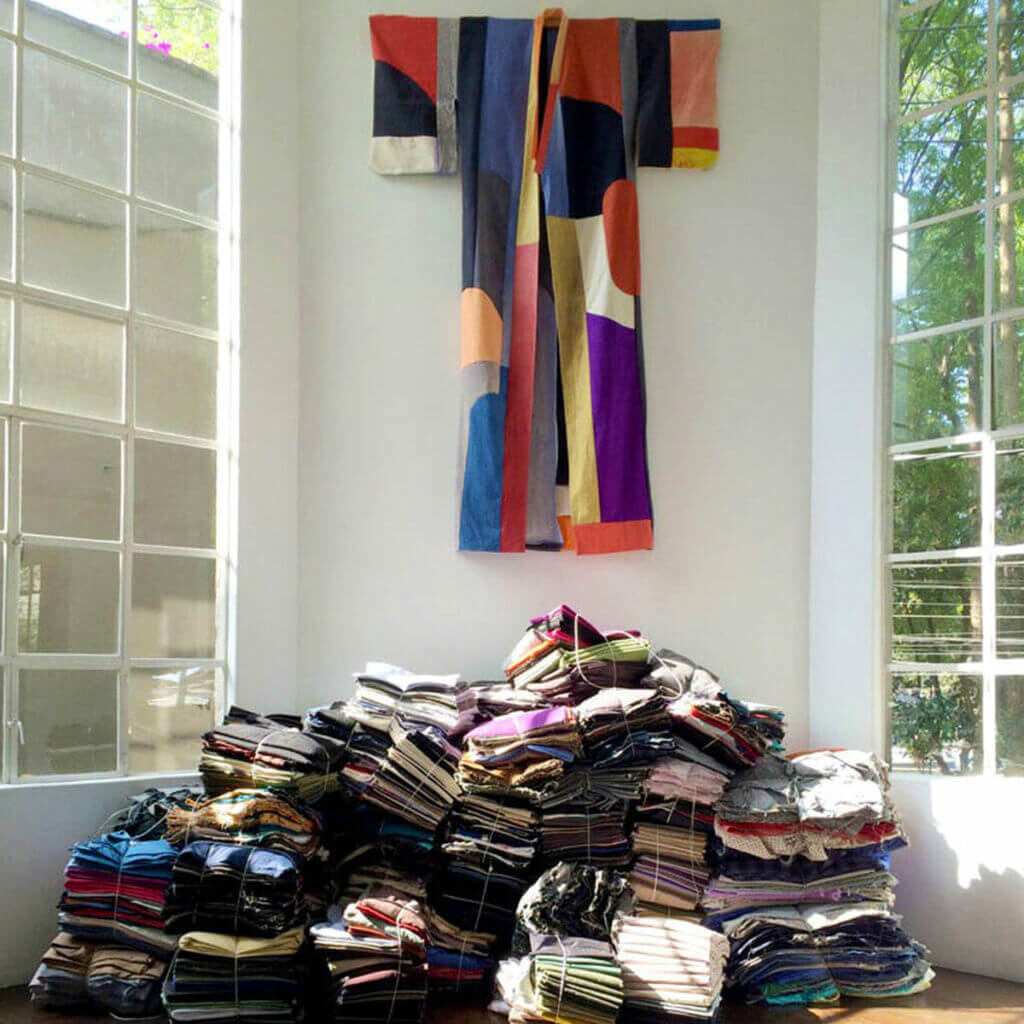 “I’m interested in destabilizing these notions of high and low, and making a statement that you can create an artwork out of something once considered a failure.”

Her paintings often have sculptural forms, drawing inspiration from disparate sources as graffiti art and minimalist geometry of Frank Stella. In her later work, Pia Camil is interested in breaking the boundaries between viewers and the work on view. 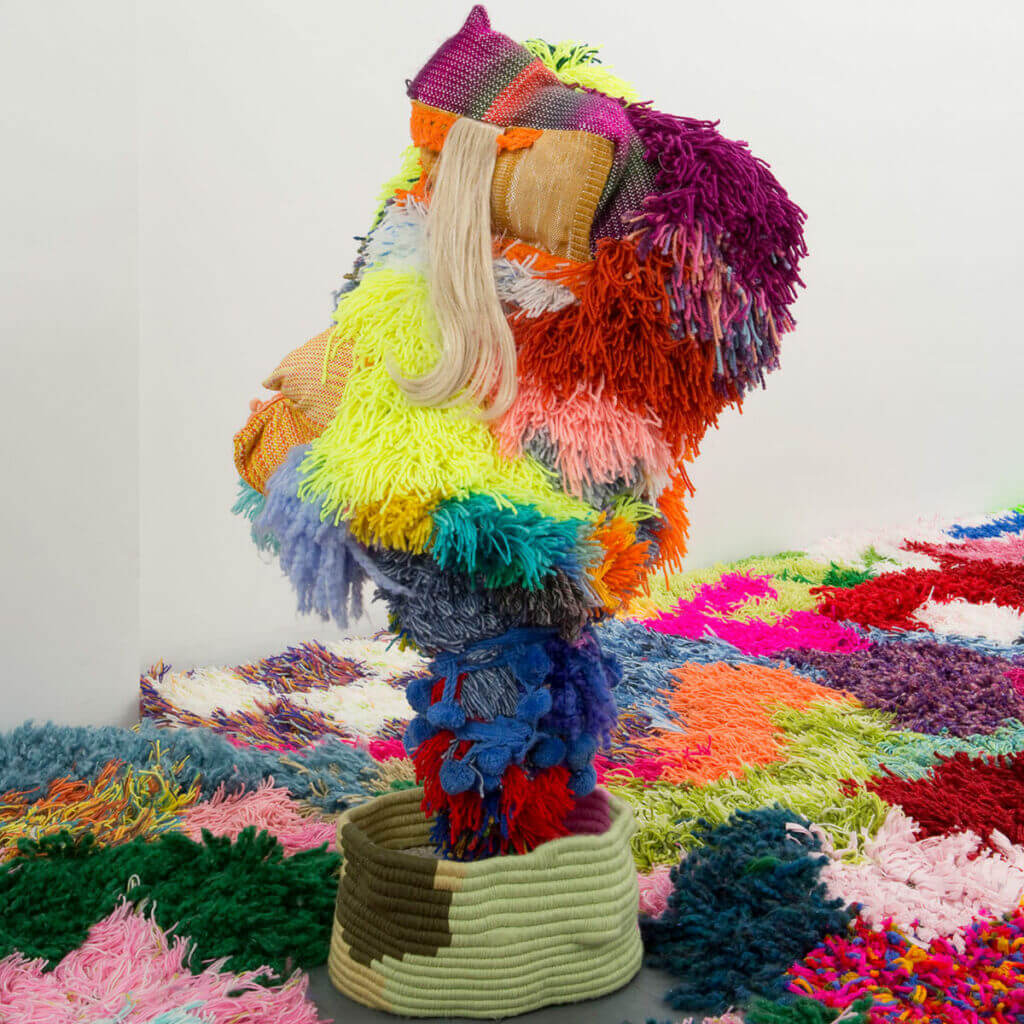 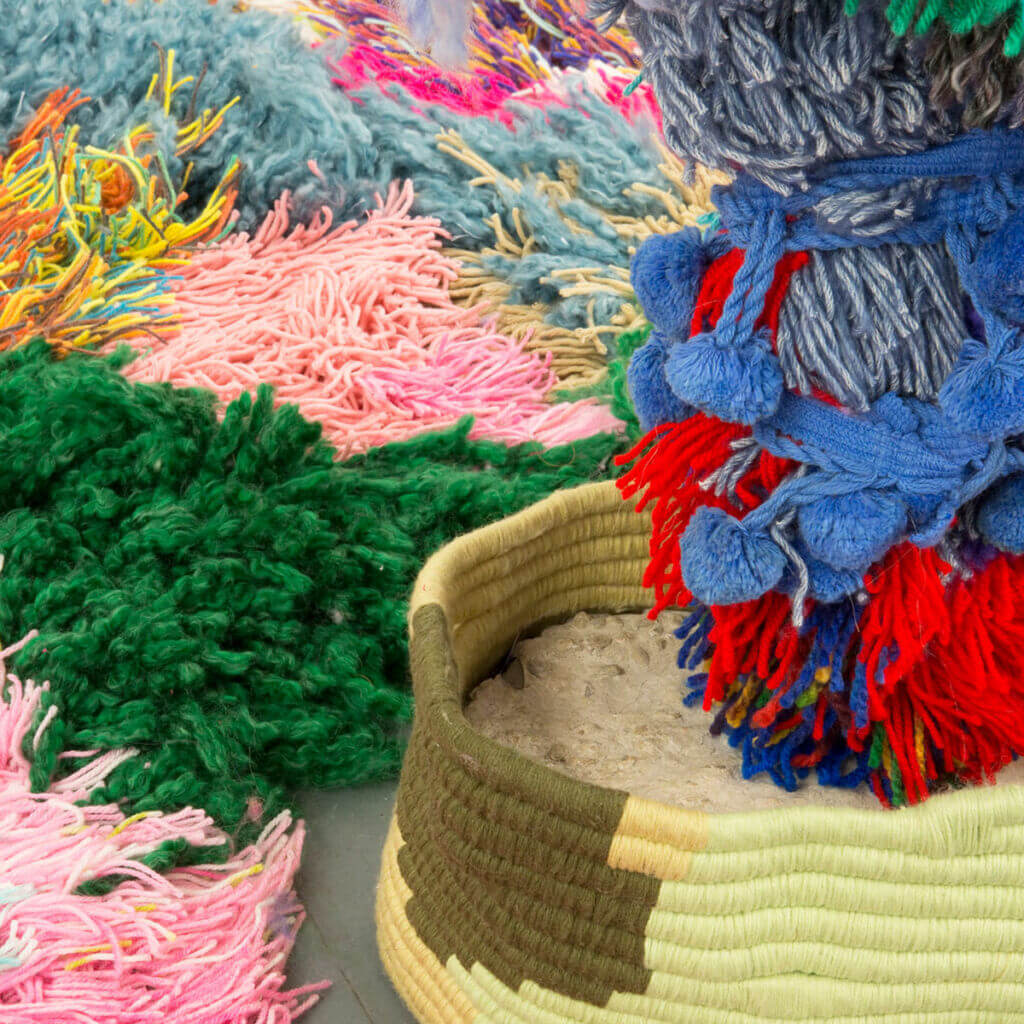 Exploring issues that are part of her identity, Peruvian American artist Sarah Zapata examines the appropriation of values that deal with the image of feminine and handmade. By using common materials such as yarn, fabrics and paper, Sarah creates artwork that is steeped in tradition, system, labor and has cultural relevance. 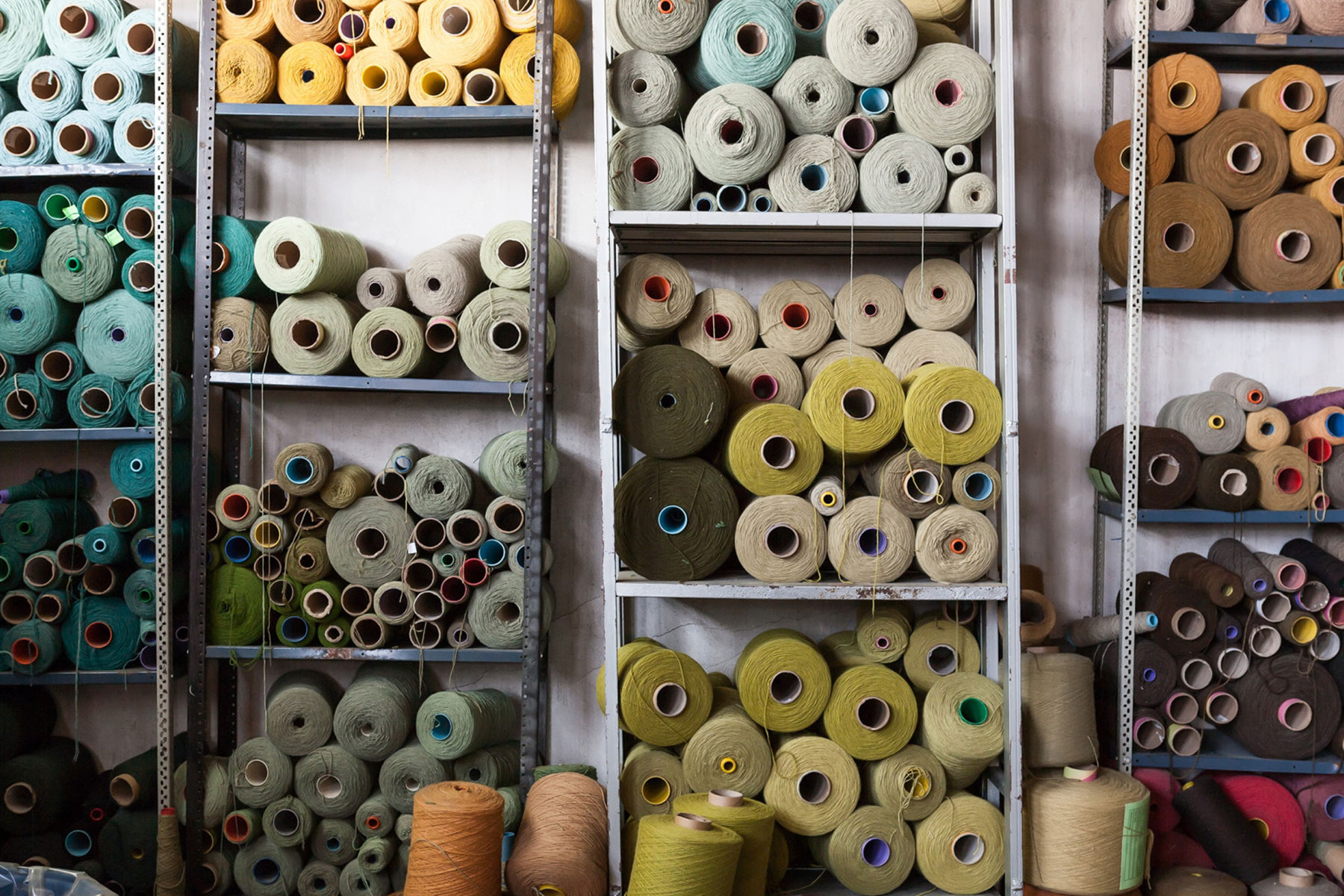 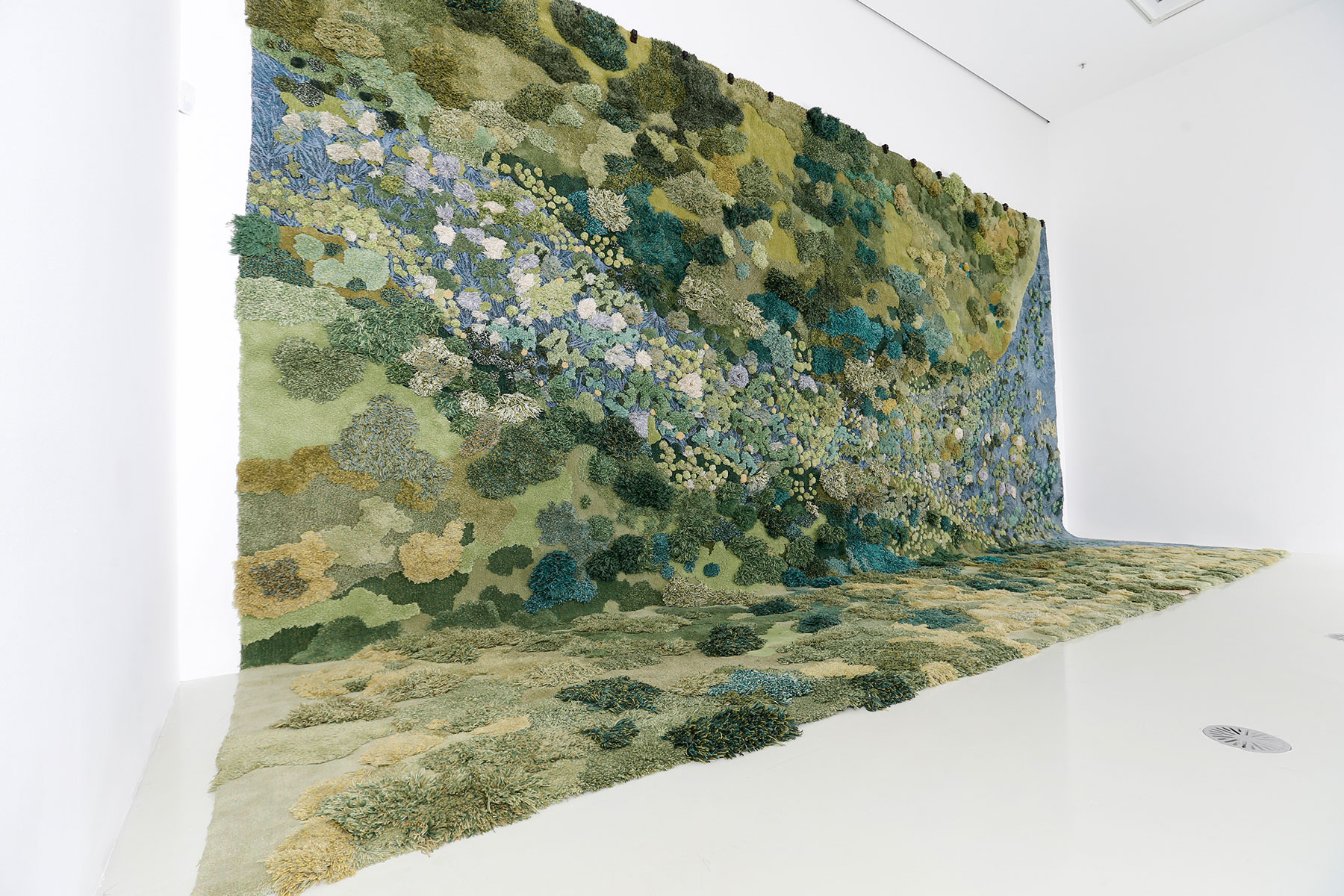 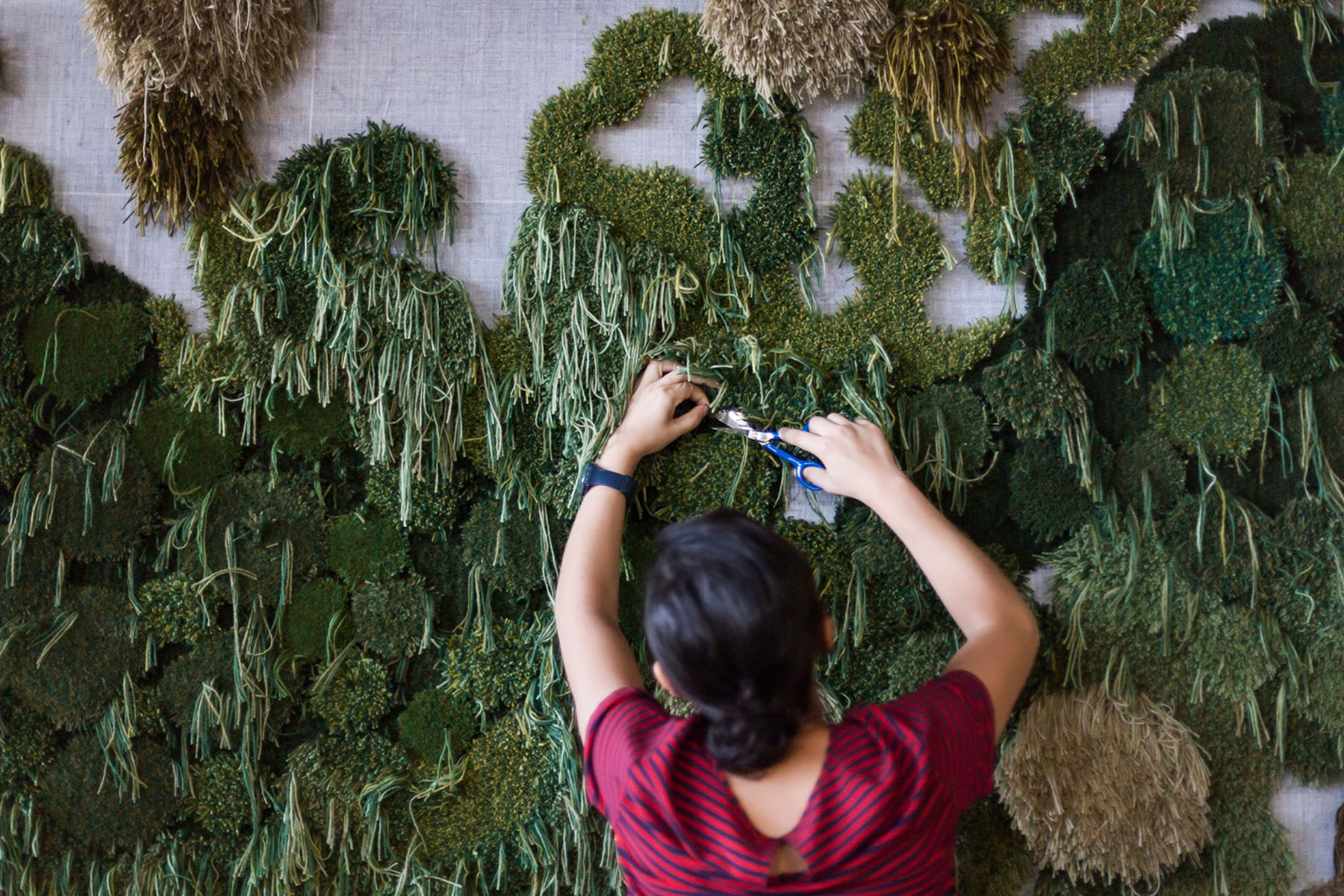 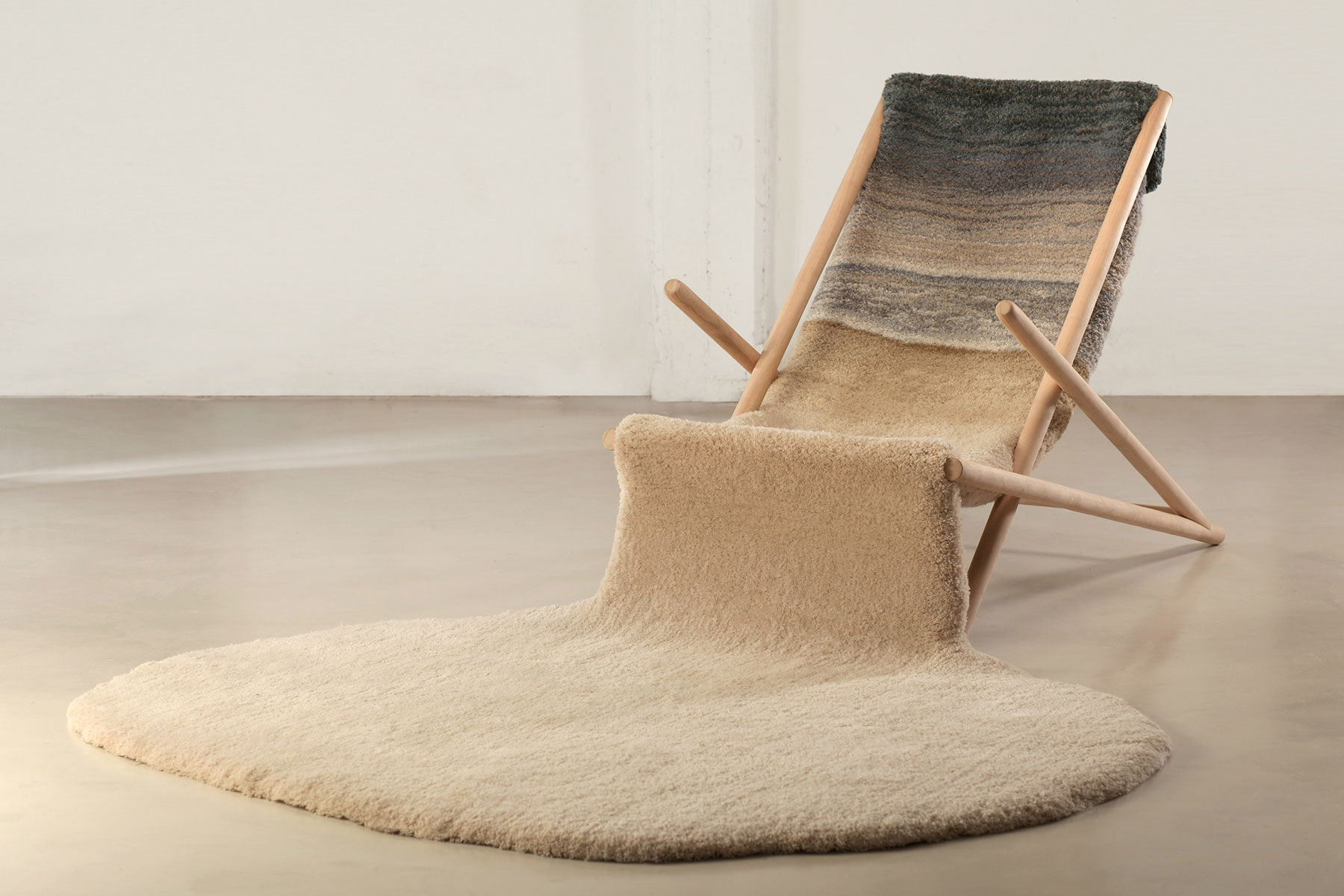 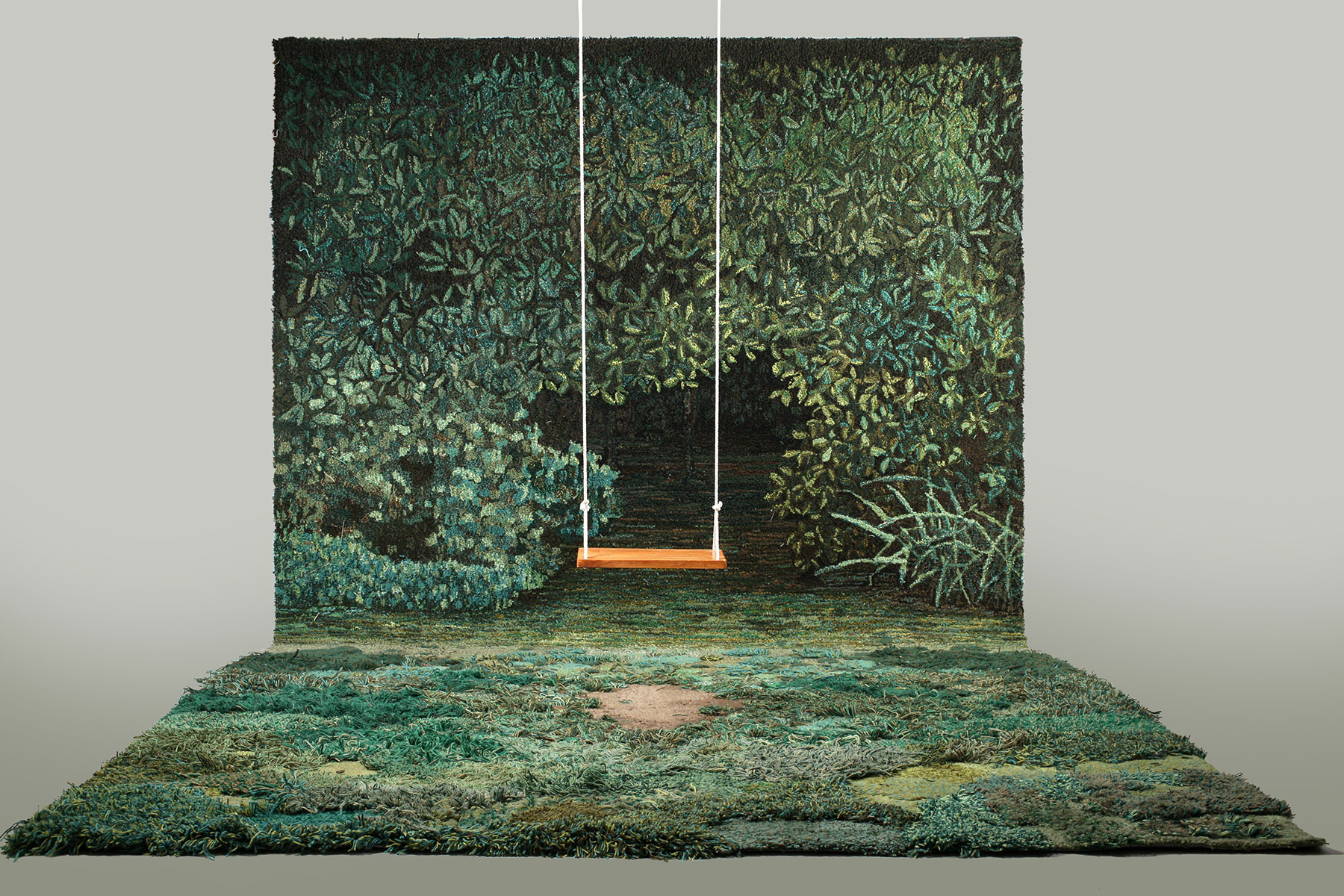 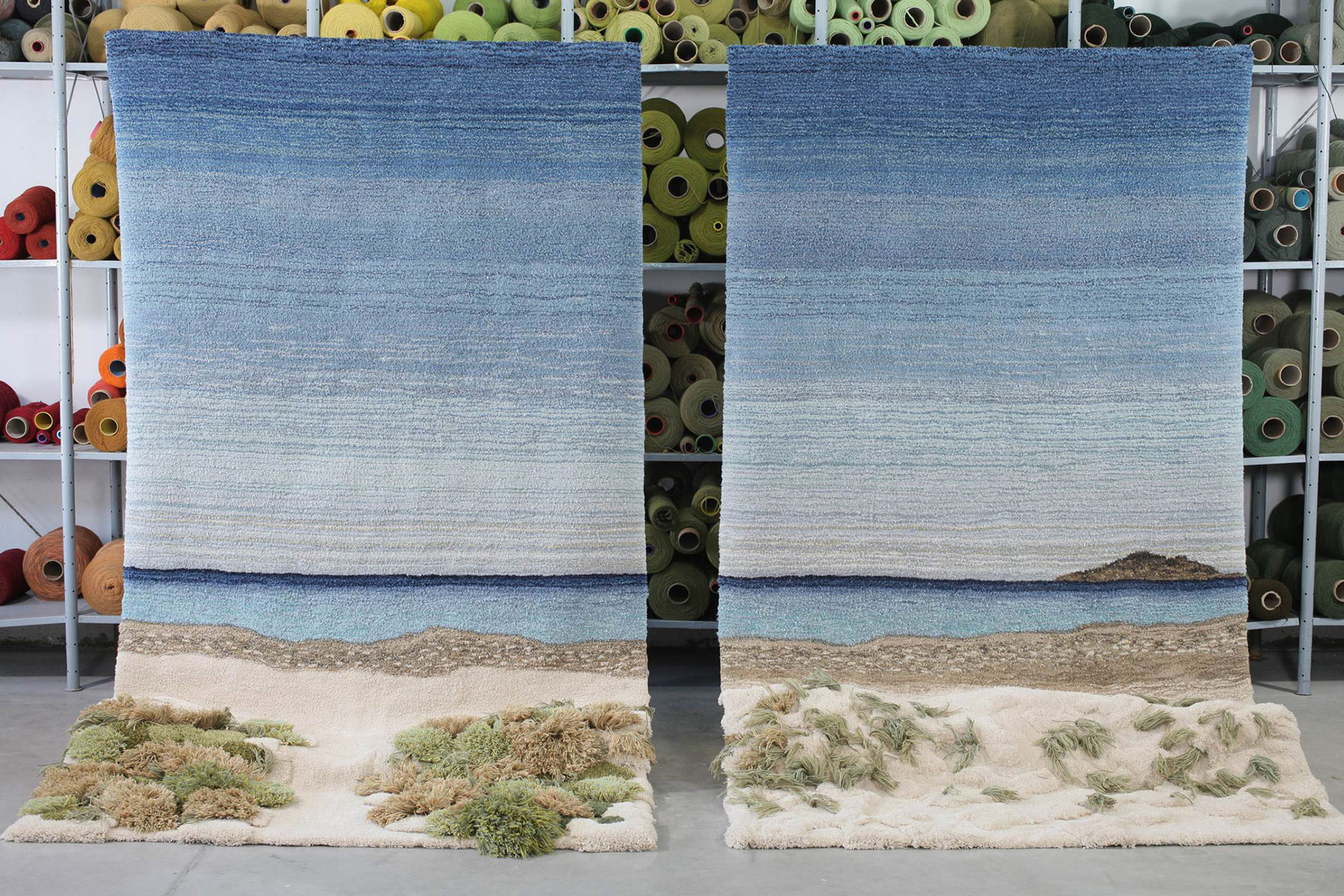 Alexandra Kehayoglou is a contemporary artist producing hand-tufted rugs and tapestry that closely resembles aerial pastoral landscapes. Using scraps of yarn salvaged from her family’s carpet factory, Alexandra is creating idyllic visions of nature. The images in her textiles are often based on real examples and topography of her native Argentina (in the case of “Pastizales” series). Viewers can interact with these rugs and walk on them.

“Being touched, walked on, and dirtied brings the works to life… My rugs become a register of lives lived.” 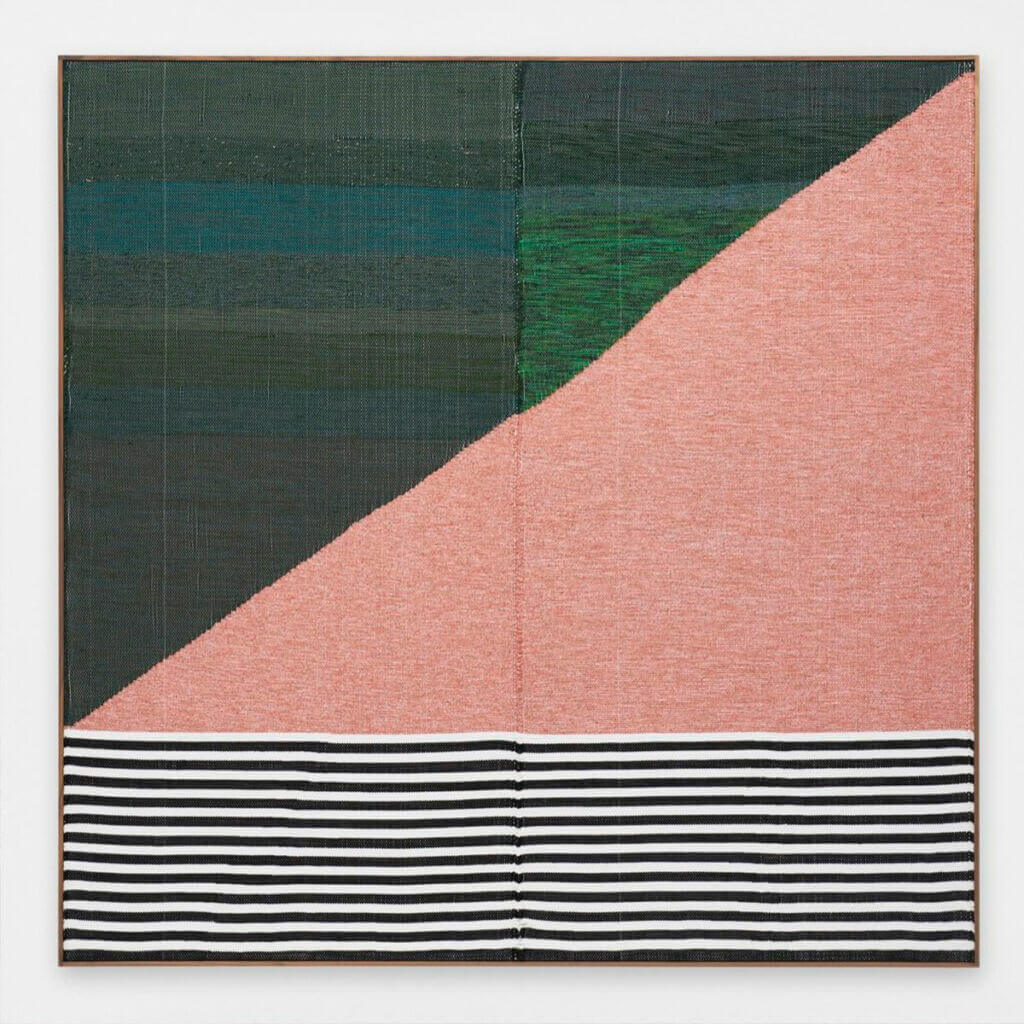 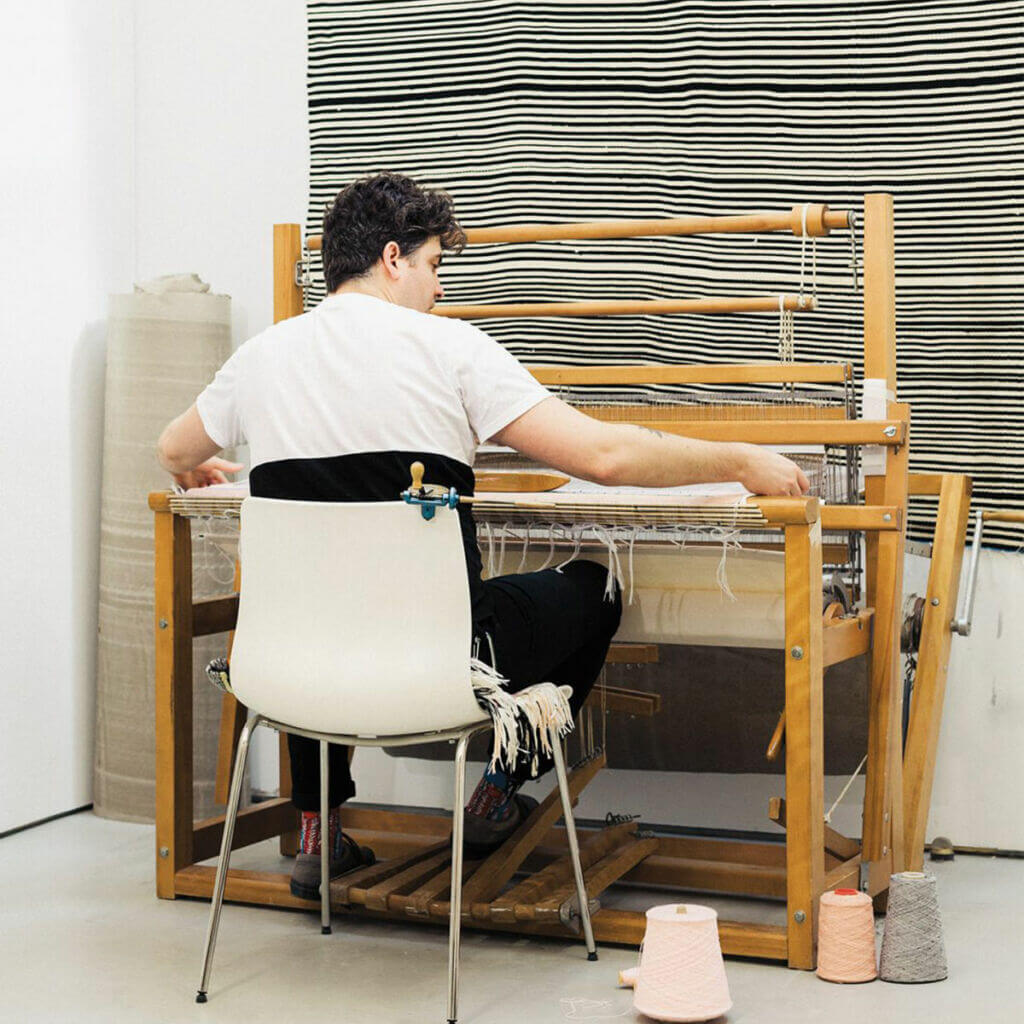 At a first glance, the work of Brent Wadden resembles color field paintings of great artists such as Frank Stella and Elsworth Kelly with the geometry and study of color. Wadden has taken abstraction to a slower-paced direction, but despite the time invested in creating one abstract work weaving on a loom satisfies the artist’s urge to make a tactile, one-of-a-kind objects by hand.

Besides above mentioned artists whom we love, it’s important to emphasize that as humans, we come in contact with textile art every day. From the clothes we wear to the objects that decorate our home – textile art is something that can be simultaneously beautiful and useful.